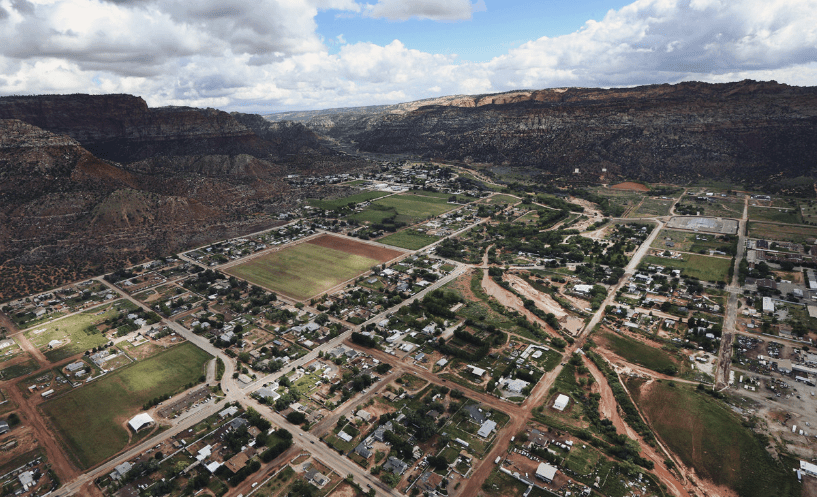 A polygamous group based on the Utah-Arizona border is letting go of the sprawling building where its members worshipped, in the latest sign that the sect run by imprisoned leader Warren Jeffs is crumbling and losing control of the community it ruled for a century.

The Fundamentalist LDS Church now has nowhere to gather for worship services after the nearly 53,000-square-foot building was taken over last week as part of government-ordered evictions that have taken away about 200 homes and buildings from members who refuse to pay property taxes and $100-a-month occupancy fees.

The meetinghouse with capacity for several thousand people is valued at $2.8 million and sits on about 7 acres in the remote red rock community, on the Arizona side of the border.

The building has a stage, an area for church services and classrooms for religious education but has not been used for at least six months, Jeff Barlow said Monday. He is the executive director of a government-appointed organization that oversees a former church trust that has properties in the sister cities of Hildale, Utah, and Colorado City, Arizona.

The FLDS Church doesn’t have a spokesperson to comment about the development.

The sect is experiencing a major leadership void with Warren Jeffs serving a life sentence for sexually assaulting underage girls he considered brides and his brother Lyle Jeffs serving nearly a five-year sentence for his role in carrying out an elaborate food stamp fraud scheme and for escaping home confinement while awaiting trial.

WHAT A MESS AND HOW SAD THIS ALL SEEMS. THEY FORGOT THAT WE NEED TO OBEY THE LAWS OF THE LAND.