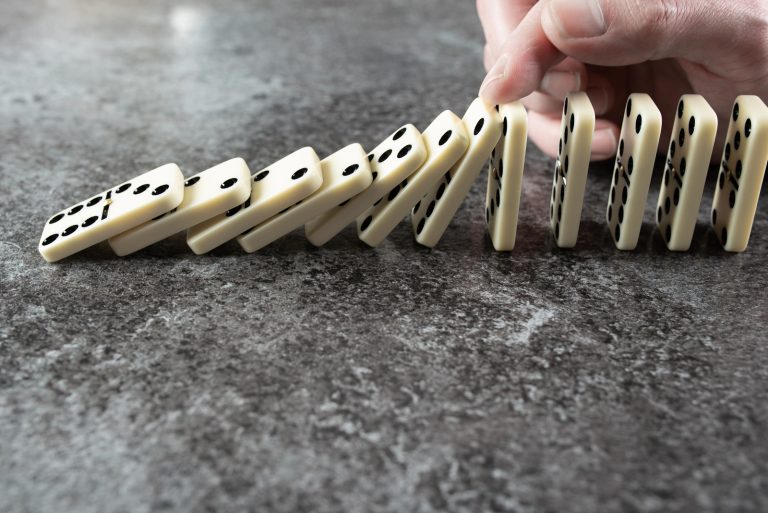 Polyamory and the Domino Effect

In 2013 Hans van Leeuwen of Leiden University set out to find just how powerful a domino chain reaction could be. Through a mathematical model, Leiden found a domino small enough to hold in your hand could start a chain reaction that would eventually topple a 112-meter tower. If we use Leiden’s discovery to look back in time at the history of traditional marriage, we may see a similar force.

If the “No-fault divorce” law of 1969 can be compared to the first small domino, what is the 112-meter domino of today? According to John Murawski of Real Clear Investigations, it’s polyamory. Polyamory activists are working to clarify “misconceptions” about their “love don’t judge” lifestyle. To avoid confusion about polyamorous relationships, we should understand the differences between polygamy, polygyny, and polyamory. While each of these terms defines non-monogamy, activists claim they are profoundly different.

Polygamy is the general term for a union of more than two people. The practice of polygyny is defined as one man and multiple women, and polyandry, which is quite rare, is the practice of one woman taking several husbands. Polyamory, “allows both men and women to engage in concurrent sexual or romantic relationships with multiple people, with the knowledge and consent of everyone involved”. Jane and John love each other, but John is welcome to have other relationships, as is Jane.  Polyamorous structures also differ from polygamous structures as all members and genders can be intimately involved simultaneously. John and Jane fell in love with Joe. Polyamory has been around for years but has recently begun to gain the momentum needed to knock down the next domino.

It’s estimated that more than one-fifth of American’s have participated in non-monogamous relationships in the past and that number is expected to rise after quarantine. The American Psychological Association has recently established a “Consensual Non-monogamy Task Force”, whose main goal is to “make sleeping around with multiple partners in a variety of situations acceptable.”  The APA argues that as long as “sex is consensual, no judgment should be attached.” Polyamory is also a growing trend on college campuses and among Millennials. Students are organizing clubs, and advocacy groups in support of “ethical non-monogamy”. Some of the greatest chain reactions build momentum from media and entertainment. HGTV ratings went up after they aired an episode featuring Brian, Lori, and Geli, a “throuple”, on the hunt for a home to accommodate them and their two children. After featuring six different polyamorous celebrities in February, Insider states that polyamory has become “ mainstream” in our society and having it’s “time in the spotlight”.

Murawski believes that polyamory activists, “are laying the groundwork to have their cause become the next domino to fall in a long line of civil rights victories”.  University of California’s Heath Schechinger, a counseling psychologist believes, “There is plenty of evidence that consensual non-monogamy is an emerging civil rights movement”.  Poly activists are not wasting time in gaining elected official support. Over a dozen local governments are working on anti-discrimination ordinances to include, “relationship structure” definitions. If this is true and the legalization of “relationship structure” or polyamory is the next domino to fall, what domino will be next? Where does society draw the line? Will societies need for the novel ever end? It looks like, when it comes to aberrant sexual behavior, you can never get enough of something you don’t need.

Where does this lead?

Lost in the discussion of the right of adults to define and form relationship structures based on their desires is the effect polyamory has on children. Rates of child abuse skyrocket for children living with non-biological guardians and that rate will increase as the number of adult guardians increase. Given the human propensity for breaking down sexual boundaries, it is likely that polyamory is not the final 112-meter domino to fall at the end of this experiment with human sexuality. What will be the next safeguard to fall in this destructive chain reaction?

When organizations like SEICUS, Sexuality Information and Education Council of the United States, and Planned Parenthood advocate for the “sexual rights” of children, and others move to classify pedophilia as a sexual orientation, and libraries and parents support drag queen story hours for children, is it unrealistic to wonder if society might at some point knock down prohibitions against consensual sexual relations between adults and children? The history of the sexual revolution provides ample evidence that we now live in a world where adults prioritize what feels good for them. Lost is what is good for children, families, and society – and polyamory just isn’t.

This is so disheartening. Children suffer so much already, and this will make it worse.