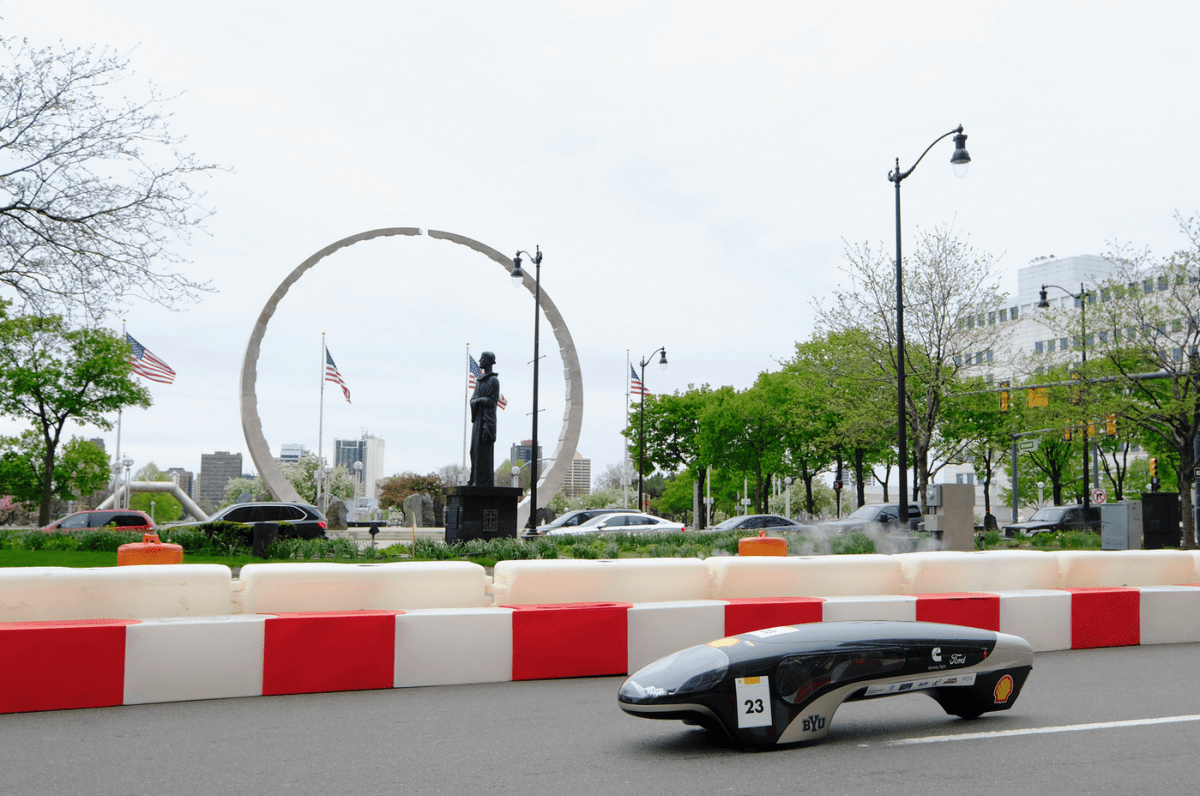 Move over Toyota Prius, Chevy Volt and other hybrids: BYU engineering students just built a car that gets 1,700 miles per gallon.

The ridiculous mpg effort resulted in a 2nd-place finish at the Shell Eco Marathon Challenge, an international competition featuring 56 cars from schools across the United States and Canada. BYU’s supermileage vehicle was the highest performing American entry, outperformed only by Quebec’s Laval University.

BYU mechanical engineers have built supermileage vehicles for the past five years (see some of their past work here and here), but this year’s model was the first with an engine built from scratch.

“In previous years, we used an off-the-shelf engine that was modified for our vehicle,” said faculty adviser and mechanical engineering professor Dale Tree. “To have the students build an engine on their own and have it perform this well was really impressive.”

The vehicle put up numbers similar to past iterations, but this year’s car actually maneuvered regular city streets, twisting and turning through downtown Detroit to achieve the feat. From 2012 to 2016, BYU teams competed in events where vehicles simply looped around a race track.

On its best run, the BYU car consumed only 14 milliliters of gasoline over a 6-mile course, resulting in a rate of 1,709 mpg — exactly the distance from Provo to Detroit.* Only 30 of the cars in the competition were able to complete the full distance within the rules to receive a mileage rating.

Ten BYU students traveled to Detroit for the competition and connected with several BYU supermileage team alums who now work for Ford and other companies in The Motor City.

“It’s nice to finish high in a competition and achieve a lofty mileage rating, but to me, the training the students are getting is the most important thing,” Tree said. “This type of experiential learning is what we aim for and it feels good to see the opportunities we are providing students to land good jobs.”

*Lab Supervisor David Laws drove a department truck home from Michigan, pulling the supermileage vehicle behind in a small trailer. He set the trip odometer to zero when he left the motel in Michigan and when he pulled up to the Fletcher Building on BYU’s campus, the odometer read 1,709 miles. “The cost of driving the supermileage car home would have been $2.40, but a very uncomfortable ride,” Tree said.

This is real education. Teamwork, creativity, and building a future way beyond the school. A+