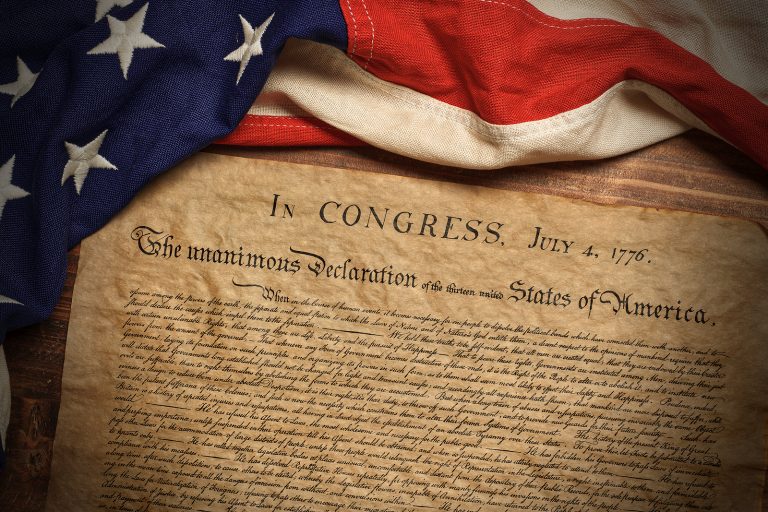 On this Glorious Fourth, Praise Those Who Wielded a Quill

In support of a cause that was thoroughly unlikely to succeed, these patriots pledged their lives, their fortunes, and their sacred honor, and they chose an equally unlikely time to use a parchment to poke the King of Great Britain in the eye.

When the Declaration of Independence was declared to the world on July 4, 1776, the thirteen American colonies had been at war with Great Britain for more than a year.  Their prospects were not good; they faced the greatest military power on Earth.  “The shot heard ’round the world” had been fired at Concord, Massachusetts in April 1775.  By the summer of 1776, the colonists had yet to win a battle (although they might get credit for winning a skirmish or two), and George Washington was still learning how to command an army and fight a war.  Much of his time was spent pleading with his soldiers to re-enlist rather than return home.

The same week that the Second Continental Congress endorsed the Declaration in Philadelphia, Great Britain sailed the largest expeditionary force ever assembled into New York harbor, only about 90 miles away.  When the delegates signed the Declaration, many of them thought they were signing their death warrants.  Treason was punished by hanging.

Thomas Jefferson of Virginia was the Declaration’s chief draftsman.  He drew on ideas that had recently been ratified in the Virginia Declaration of Rights, whose chief draftsman was George Mason (with James Madison and others lending a hand).

Jefferson’s draft was amended by members of a five-man committee, and amended further by the Congress itself. Jefferson, the genius, was not pleased that mere mortals would tinker with his work, even though two of those mortals were John Adams and Benjamin Franklin.

School children once memorized the first paragraph of the Declaration (“When in the Course of human Events. . . .”), but the deep principles are found in the second paragraph, which reads:

“We hold these truths to be self-evident, that all Men are created equal, that they are endowed by their Creator with certain unalienable Rights, that among these are Life, Liberty, and the Pursuit of Happiness—That to secure these Rights, Governments are instituted among Men, deriving their just Powers from the Consent of the Governed. . . .”

My own guess is that no other solemn sentence in the English language has been repeated so frequently in all corners of the globe.  As I write, protesters in Hong Kong are relying on unalienable rights, but the Chinese Communist Party is unswayed.  As for the Declaration’s relevance today in America, I touch on that topic below.

After the famous second paragraph, the Declaration sets out more than two dozen complaints against the King, and then declares that “these United Colonies are and of Right ought to be, FREE AND INDEPENDENT STATES. . .”

John Hancock, the President of the Congress, signed the Declaration on behalf of the assembly, and individual delegates signed later.  The sentence above President Hancock’s signature has already been referenced, but bears repeating:

“And for the support of this Declaration, with a firm Reliance on the Protection of divine Providence, we mutually pledge to each other our Lives, our Fortunes, and our sacred Honor.”

The final sentence contains two of the Declaration’s four references to God (“divine Providence” and “sacred Honor”).  There is one reference in paragraph one (“Laws of Nature and of Nature’s God”), and another in that famous second paragraph (“endowed by their Creator”).

Jefferson’s aspirations are, perhaps, more pressing in the United States today that they have been in decades.  Jefferson wrote, and the Continental Congress ratified, the assertion that “all Men are created equal.”  Today, there is an assertive push for greater equality among peoples of different skin colors.  This may be the summer of Black Lives Matter.

As if Jefferson, a slave holder, and his Declaration were not enigmatic enough, he condemned slavery in his original draft, but his “editors” removed the indictment.  Jefferson had condemned King George for trafficking in slaves, which Jefferson called an “execrable commerce.”  That original draft also said that the king was waging a “cruel war against human nature itself” because slavery “violated” the “most sacred rights of life & liberty.”

The Declaration deserves full praise, but I wonder why we celebrate July 4 with parades and fireworks and not October 19, the day on which (in 1781) the British surrendered at Yorktown.  The signers did indeed pledge their lives, fortunes, and sacred honor, but the signers did not win the war.  (One source says that nine of the 56 signers died in the war, or as a result of its hardships, which is a problem endured by civilians, not combatants.)  The war was not won in Philadelphia, but in Trenton, Princeton, Saratoga, Boston, New York, and Yorktown (not all of which were victories) where thousands gave their lives and limbs, leaving behind their widows and orphans.

I am not a veteran (all praise to them), but I know that parliamentarians do not win wars.  On this glorious Fourth, praise those who wielded a quill as well as those who tramped with musket and bayonet in tattered clothes and worn-out shoes, poor rations, and the ever-present specter of disease.  Probably more Americans died as prisoners of war than on the field of battle.

Thank you for honoring President Thomas Jefferson. He deserves the praise of all men who wish to live in freedom and worship their Creator who inspired this sacred document.