On Blessings that Sting | Meridian Magazine 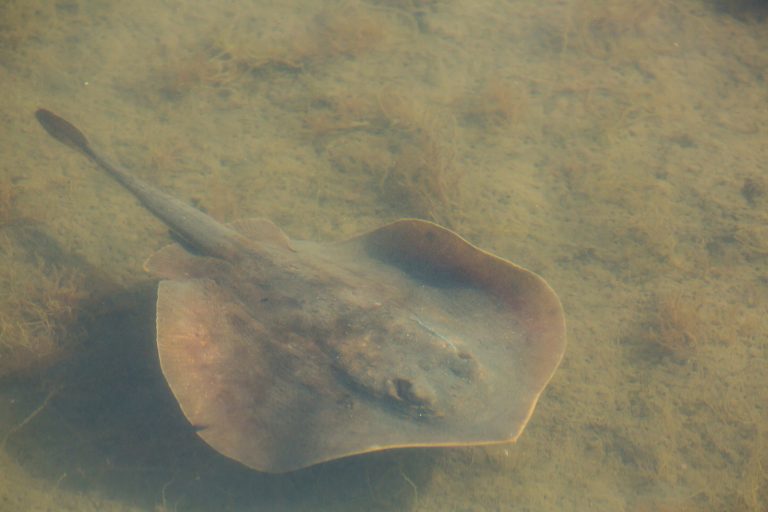 The Lord has a way of blessing us even with the stings.

It was well into October, but the usual tell-tale signs of autumn didn’t change the California coast much so I was wading out into the ocean at Huntington Beach as though it were July. I’ve never much known what to do with the ocean except look wistfully out at it, read literature about it, and enjoy the rhythmic sound of its waves. I’ve never been much for actually getting in. But I had braved a little wading and was even enjoying it when I felt a sharp pain in my foot that I thought must’ve come from a jagged rock. Strictly speaking, it felt like getting snipped with sewing scissors, but that seemed an unlikely cause.

I came in from the waves and saw that the edge of my foot was purple and bleeding. My husband was far out among the swells attempting to surf, so I went looking for a lifeguard to see if they might have something to bandage my foot. The lifeguard leaned out the window of a white pick-up and after only a glance said, “you were stung by a sting ray.” I was shocked. “You need to get your foot in some hot water to neutralize that venom or the pain is going to travel up your leg.”

We did as he said and the pain must’ve been neutralized because the pain didn’t bother me for long, though the hole left by the stinger remained. Not long after, I started to notice strange symptoms in my body. My heart seemed always to be racing. I couldn’t walk up the hill I had often walked with my Dad in the mornings without it feeling like my heart was pounding out of my chest. I was losing weight rapidly no matter what I ate and my hair began to come out a little more than usual.

I was afraid it was an infection from that sting. I didn’t know if such a thing was possible, but I’d watched enough episodes of House to know that crazy symptoms can come from exposure to all kinds of things. I saw a doctor, who ran a battery of tests. All of them came back negative (I’ve always thought that if a test comes back negative, it should be free…) I saw another doctor who ran many more tests.

I finally learned that I had hyperthyroidism. It wasn’t related to the sting at all. I began to be treated for it and my thyroid’s function returned to normal not long after. The symptoms went away. I caught it early, treated it well, and it has rarely bothered my since.

I am not someone who visits the doctor very readily. In fact, I would likely have put off going until the symptoms had lasted months or years or significantly worsened if it weren’t for that unexpected sting that made me think I might have some oceanic infection.

I am grateful for that sting.

When we embarked on the journey of finding a home to buy, we had very specific criteria. It needed a mother-in-law apartment that we could live in while we rented out the rest of the place to offset the mortgage. We wanted something we would love, even though we planned to live in the basement. We found “the home” in Riverton, Utah. It had a beautifully cultivated backyard, a bright and functional kitchen, all kinds of unique details to love and of course, the mother-in-law apartment.

We put in an offer, certain the place would be ours, despite the ever-competitive Utah housing market. The owners were considering offers at the same time we went on a cruise. I bought a little mosaic outdoor decoration for the backyard of our would-be house and imagined just where I would hang it. We chatted with another couple we met on the boat about how excited we were for this purchase and this new season of life.

But when we arrived home, after a series of counter offers back and forth with the owners, they decided people weren’t willing to give them what they thought their house was worth and they took it off the market.

Our house wasn’t our house after all.

It was only a few weeks later that I woke and checked my phone first thing in the morning to see a new listing. Something that might fit our needs. We saw the listing at 8am, toured the home at noon and put in an offer at 1:30. We didn’t need to sleep on it. We both knew.

We thought we had found the one before, but this one was so much better for us in so many ways and sure enough, though they had many offers, they picked ours. We closed on the place and moved into a basement that we liked even better than the rest of the house. Had it not been for the sting of that first house opportunity slipping through our fingers, we would never have known what we were missing out on.

I am grateful for that sting.

The Lord has a way of blessing us even with the stings.

There was someone I cared about deeply through much of my college experience. When what started out as one of my life’s best friendships began to feel like it could be something more, we went on a date or two and I decided to make an elaborate gesture to communicate how much I was in it.

He shot me down pretty hard.

So hard in fact that I cried the rest of the evening and all through the next morning. I had to conduct the music in my singles’ ward and though I tried to maintain composure and focus on the task, the dragon tears flowed freely and a boy in my ward approached me afterward and said, “whoever he is, he doesn’t deserve you” and then quickly recited some perfectly appropriate Shakespearean sonnet.

But the sting was unbearable; significantly worse than the puncture of a stingray that wouldn’t come until years later and would be quickly neutralized by hot water.

It felt like the Lord had brought us together over and over and I didn’t understand why this person who I knew valued my friendship didn’t want me.

Two months later, in a hotel lobby in Kathmandu, Nepal, I met the man with whom I now share a marriage, a home, two children, several businesses, and a dog.

I would’ve waited for the possibility of that other person forever. His telling me that there was no possibility was a sting I wasn’t prepared for, that I wished hadn’t happened. But without the sting, I would’ve stood with that handsome man on that rooftop terrace in Nepal and considered myself unavailable. Without that sting, I wouldn’t have this husband of mine who is adventurous, kind, insightful, service-oriented, fun to talk to, eccentric in just the way I am, and so full of unfettered love for me.

Now, I am grateful for that sting.

I have seen, time and again, how the Lord has a different plan than I thought and how the things that I wanted and didn’t get were just paving the way to something better for me.

Not every pain and disappointment in my life has found its satisfying conclusion (and the examples I gave here were largely simple ones). When the stings are more serious, more deeply painful, it can feel impossible to identify the blessing in every sting. Not every sting can rightly be called a blessing, but because of the Source of all blessings, we know that the stings don’t have to keep stinging.

The Lord can take every heartache and apply the healing balm of the atonement. He may not have sent the disappointments, but He will use them for your growth.

And He will be there, arms outstretched, when the hardest moments inevitably turn you back to Him.

“For after much tribulation come the blessings”

Thank you for this wonderful insight. I, too, have had many "stings" in my life that resulted in wonderful blessings. Some of these "stings'" were so emotionally painful, I thought I would never recover. It is wonderful to have a testimony that we have a loving Father who knows what is best for us even if it is painful and may temporarily leave us wondering why we have to go through such a trial.

That was an interesting article you wrote. Thank you for sharing your experiences. Wow, I bet that was incredibly painful when you got stung by that stingray. I had a similar situation with the housing situation and we bid on this house and so hopeful we would get it, but that did not happen. I was so disappointed when our bid was turned down. But we ended up building our home and that turned out to be the best thing we did. This was 28 years ago and I am grateful we did not get that original house that we wanted. Sometimes greater blessings come if we just be patient!