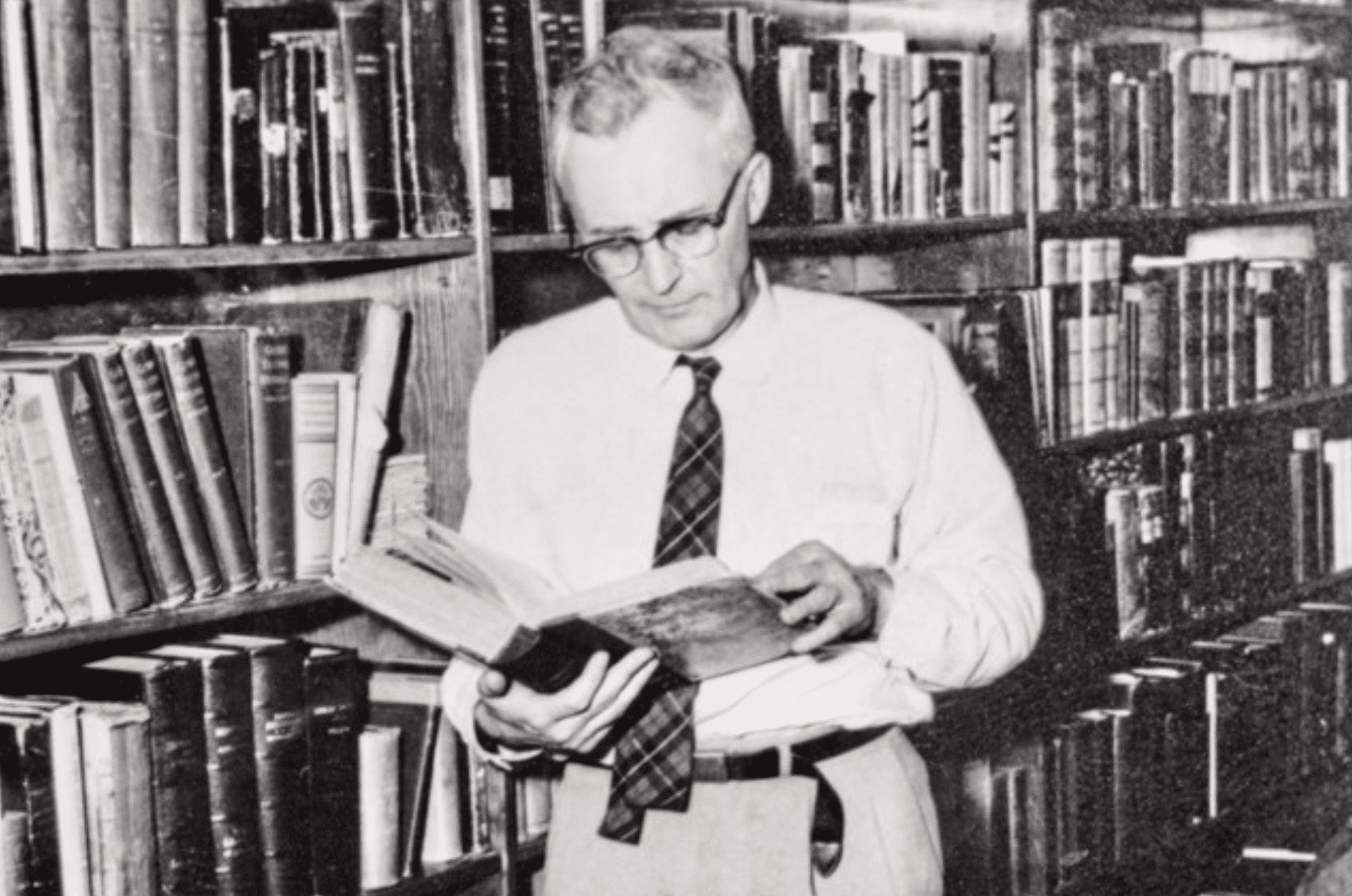 I’m not overly fond of the term “apologist.”  Why?  Because it suggests to some that apologetics is something quite distinct from scholarship.  Often, though—as in classical cases like St. Thomas Aquinas (1225-1274), John Locke (1632-1704)), and C. S. Lewis (1898-1963)—it is actually a specific type of scholarly work.  If we decide to use the word, though, Hugh W. Nibley (1910-2005) was, by any reasonable standard, the foremost Latter-day Saint apologist of the twentieth century.  Along with such rough contemporaries as the late Richard Lloyd Anderson (1928-2018) and John L. Sorenson (1924-), he broke the ground that contemporary defenders of the Restoration, most of them explicitly inspired by his example, continue to work and to expand.

Leonard Arrington (1917-1999), I think, can be said to have had a similar pivotal effect on the study of Latter-day Saint history, but he was not typically an apologist.  In many ways, however, FAIR and Book of Mormon Central and the Interpreter Foundation today represent the lengthened shadow of Hugh Nibley.  Moreover, like that of Anderson and Sorenson (and, for that matter, that of Arrington), Nibley’s own work remains rich and relevant.  It is no mere curiosity of Latter-day Saint intellectual history.

But Hugh Nibley was ninety years old at the close of the twentieth century.  He had long since published his last book, his energy was winding down, and his public presence was beginning to fade.  And, since the beginning of the new millennium, an entire new generation has been born and grown to maturity.  Many in the Church of Jesus Christ of Latter-day Saints know him now only as a name—albeit, perhaps, as a name that’s vaguely connected with intellectual brilliance, formidable linguistic ability, keen wit, and complete devotion to the Book of Mormon, ancient and modern temples, and the Gospel in general.  Some know that he was a colorful personality, very much an individual; he has actually become something of a legendary character, the focus of myths and anecdotes.  For many others, though, he is invisible, forgotten, and his work effectively lost.

Recognizing the magnitude of such a loss for the Latter-day Saints, the Interpreter Foundation, led in this effort by Jeffrey M. Bradshaw, one of its vice presidents, and assisted by its sister organizations, FAIR and Book of Mormon Central, has undertaken to remind a new generation of the man and his contributions.  And now the main product of that undertaking, an 800-page volume under the title of “Hugh Nibley Observed,” has arrived from the press.

Edited by Jeffrey M. Bradshaw, Shirley S. Ricks, and Stephen T. Whitlock and featuring a foreword by John W. Welch, “Hugh Nibley Observed” offers a rich smorgasbord of essays and articles—forty-two of them, by my count, written by thirty-five different authors—accompanied by nearly two hundred photographs scattered throughout the volume.  The essays and articles are divided into three unequal sections, which are identified as “Portraits,” “Nibley, the Scholar,” and “Nibley, the Man.”  I’ll describe them briefly in order:

The first section, “Portraits,” includes Jack Welch’s brief “Foreword: A Doorkeeper in the House of the Lord.” (The subtitle, “Doorkeeper in the House of the Lord,” refers to Nibley’s own self-description, which appears on the headstone of Nibley’s grave and is depicted in Figure 1 on page 28.)   Just two additional short essays complete the section:  The first of them is by Rebecca Fescher Everett, the artist who created a portrait of Nibley that has adorned the Ancient Studies Room in BYU’s Harold B. Lee Library for years.  The second is “An Intellectual Autobiography: Some High and Low Points,” by Nibley himself.

The bulk of the book falls into the second section, “Nibley, the Scholar,” which is itself divided into two parts.

“We owe both the first group of chapters in this part and the genesis of the entire book project,” Jeff Bradshaw explains, “to the rediscovery of almost-forgotten audio recordings of the BYU Neal A. Maxwell Institute for Religious Scholarship lecture series celebrating the centennial of Nibley’s birth in 2010.”  Probably as the result of a significant change in leadership at the Maxwell Institute and the dramatic 2012 change in direction adopted by that leadership, the presentations from the Nibley centennial series fell into oblivion.  It’s good to have them back.

They cover such topics as Nibley’s education, his role as an apologist, his relationship with the Church, the Book of Mormon, the Book of Abraham, mainstream classical scholarship, and Egyptology.  The late folklorist William A. “Bert” Wilson (1933-2016) examines the Nibley of myth and legend.  Richard L. Bushman focuses on “Hugh Nibley and Joseph Smith.”

The second portion of “Nibley, the Scholar,” is made up of essays that could easily have been included in that 2010 lecture series but were not.  Truman Madsen (1926-2009), another major figure who should perhaps be grouped with Anderson, Nibley, and Sorenson in my list above, considers “Hugh Nibley: A Prodigy, an Enigma, and a Symbol.”  Other essays (by such authors as Jack Welch and John Gee) focus on his presence in the University, his impact on non-LDS scholars, the pleasures and challenges of editing his work, and, again, on his treatment of the Book of Mormon and of Egyptology.  My late friend and colleague William J. Hamblin (1954-2019) provides a challenging article entitled “Joseph or Jung?”

The first portion of the book’s third section, “Nibley, the Man,” is made up of the tributes given by members of Hugh Nibley’s family at his 2005 funeral in the Provo Tabernacle.  I was there, and they were remarkable; it’s a pleasure and an inspiration to read them again.  Jack Welch and President Dallin H. Oaks, then a member of the Quorum of the Twelve Apostles, also spoke at the funeral, and their remarks are also included in the volume.  Accompanying those eulogies are two additional pieces—“The Woman Behind the Man: A Look into the Life of Hugh Nibley’s Widow,” reprinted from the BYU newspaper “The Daily Universe,” and the tribute published by Nibley’s longtime friend Louis Midgley in the “FARMS Review.”

The third section—which is to say, the book as a whole—concludes with several essays focused on “Personal Stories, Perspectives, and Reminiscences,” by his son Alex; his frequent editor, Don Norton; and Gary Gillum, the former BYU librarian who worked him a great deal.  One of the essays further discusses the “BYU folklore” connected with Hugh Nibley, and my own former missionary companion and longtime friend and department colleague Stephen Ricks, a remarkable linguist in his own right, reminisces about encounters with Nibley.  (Our exchanges of Nibley insights and Nibley stories go back to our days of going door to door in German-speaking Switzerland.)

I first encountered Hugh Nibley as a teenager, when a kindly and perceptive couple in my southern California ward took me to a BYU “Education Week” program in West Covina.  After several days of lectures from such luminaries as Truman Madsen, Hugh Nibley, and even Elder Bruce R. McConkie, then a member of the Seventy, I was hooked on BYU.  If those were the kind of people at the University, that was where I wanted to be, as well.  It was a life-changing experience.  (My own formal training and professional interests in classical Greek, Middle Eastern studies, and the history of philosophy were certainly inspired, at least in part, by my formative exposure to Truman Madsen and Hugh Nibley.)

I began to read Nibley’s writing from the very time of that “Education Week,” and I may have heard him speak in southern California at least once or twice more.  But I never met him in person until shortly after I arrived in Provo as a freshman.  A former priesthood advisor had a question.  Would I go to Nibley’s office and get his answer to it?  I did, but only after considerable pacing back and forth outside, summoning up the courage to knock on the great man’s door.  (If I recall correctly, there was a small sign on his door at the time reading something like “Leave me alone!”  He was constantly interrupted by a daily stream of eccentrics and fans and curious Saints, like . . . well, like me.)  I can no longer remember either the question or his answer, but I remember other elements of the meeting very distinctly,

After returning to BYU as a member of its faculty, I came to know people like Hugh Nibley, Richard Lloyd Anderson, John L. Sorenson, and Truman G. Madsen as colleagues and as friends, something that astonished me and for which I will always be grateful.  I’m hoping that “Hugh Nibley Observed” will give other people, and a new generation, the opportunity to know Nibley at least a little bit as I did.  But, in fact, even people who knew him will, I think, learn much from this new book.  I certainly have.

Beyond the book, though, there is another element in the Interpreter Foundation’s “Nibley project” that will help interested people have something of the experience of knowing him personally:

Back in 1985, when Nibley was seventy-five years old, a film was released under the title of “The Faith of an Observer: Conversations with Hugh Nibley.”  It featured material from interviews with friends and family members, as well as with Truman Madsen and Elder Neal A. Maxwell, and it was beautifully filmed among the pyramids and the ancient temples of Egypt, on the beaches of Normandy, and elsewhere.  Parts of it—e.g., Nibley’s retelling of the story of Abraham and three strangers from Genesis 18—are very powerful, emotionally.  “Faith of an Observer” has been available online for many years in a version that was taken from an old videocassette, but it is now accessible for viewing online without charge (at https://interpreterfoundation.org/blog-hugh-nibley-observed-1/) in a greatly improved digital version.  Moreover, for those who might have difficulty with Professor Nibley’s famous rapid-fire style of speaking, this improved version features English subtitles.  Moreover, a pdf transcript of the film is now available for download (at the web address given above), as are audio files of the video.  Wouldn’t it be wonderful if we, today, had videotapes of such great past Latter-day Saint thinkers as Orson Pratt, B. H. Roberts, and James E. Talmage?  Happily, “The Faith of an Observer” preserves the personality and voice of a thinker who belongs in their company.

I was not a BYU student, but I tried to be a student of Hugh Nibley through his published works. They have had a great influence on how I study and learn from the scriptures to this day. I heard him speak at a Salt Lake Institute devotional when I was in college and was amazed to notice that he appeared to be taking notes as he was speaking - at least he was busy writing something during his own talk. I met him once and mentioned that I enjoyed reading science fiction and fantasy (he wasn't impressed by science fiction because he felt it idealized scientists), and he told me that he enjoyed fantasy, too. A very interesting and insightful mind that more people need to be influenced by.

Adding my own miniscule associations with Hugh Nibley, I took Middle Egyptian from him 1971-72. Thirty students started the class, five finished the first semester; three of us finished the second semester. I told him of my plans to also learn Hebrew and other things. He gave me some advice: take Modern Hebrew, not Biblical Hebrew, and you'll read circles around the Biblical Hebrew students. I took his advice and he was right. He later took a keen interest in my linguistic research in Uto-Aztecan, following it closely and encouragingly. He was not only a great man and mind, but also very kind. I loved him like a second father.