“New” Strength of Youth, Not so New | Meridian Magazine 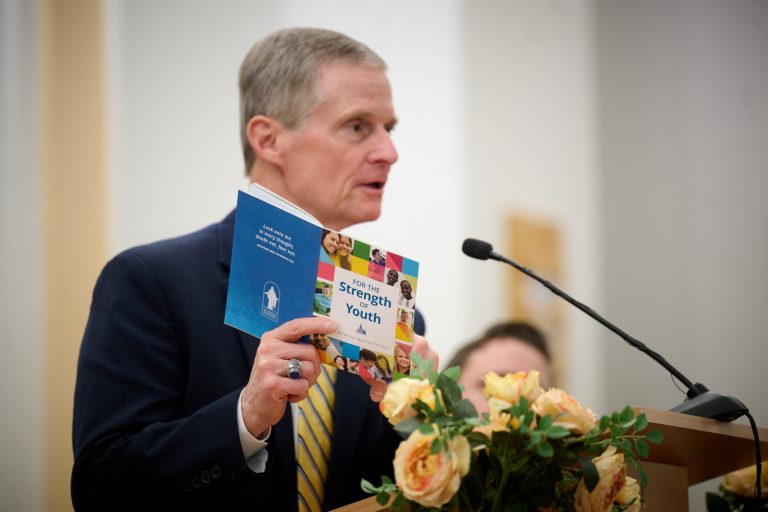 “New” Strength of Youth, Not so New

When we began our service as Mission Leaders in the Dominican Republic within two days I discovered I was breaking the rules.  As we were driving in the car with our office elders in the back seat one of them leaned forward and whispered in my husband’s ear,

“Yes, she is,” my husband replied.

“It’s against the rules.”

Half-way through our mission the missionary handbook, the “White Bible,” was discarded and we were invited to introduce our missionaries to a new guidebook, “Missionary Standards for Disciples of Jesus Christ.”  This new guideline changed the way missionaries thought in the same way “For the Strength of Youth, a Guide to Making Choices” will change the way pre-missionaries think.  For the past three years missionaries have been following a principle-centered guidebook in the mission, and now our youth will learn to make decisions based on principles as well.

I anticipate that youth who embrace “For the Strength of Youth, a Guide to Making Choices” will make far better choices in their missions where “Missionary Standards for Disciples of Jesus Christ” is already focused on principle-centered learning.

For young mission leaders such as these, the “White Bible” provided as much security as the Holy Bible.  They didn’t need to ponder, pray or dig for answers in the scriptures.  It wasn’t necessary to listen to the Holy Ghost.  All the rules were spelled out in black and white, all they had to do is be able to read.  Then they would be safe because they knew the rules were in place to protect them.

One problem was, as King Benjamin taught, “I cannot tell you all the things whereby ye may commit sin; for there are divers ways and means, even so many that I cannot number them.” (Mosiah 4:29).  In our day, with such easy access to the internet, our youth can be introduced to new ways to commit sin every single day.  It is impossible to keep current a list of “dos and don’ts”.  Principle-centered obedience solves this problem because the doctrine of the gospel doesn’t change every day.  It is steadfast and immovable.

When I was in high school I was invited to go waterskiing with some of my friends on a Sunday.  Waterskiing was my favorite sport and my family didn’t have a boat so the only way I ever got to ski was when someone else invited me.  I wanted to go waterskiing so badly I could hardly sleep in anticipation.  I told my dad about the invitation, and asked if it was okay if I went.  He replied, “Sis, you know what’s right.  I trust you to make your own decision.”

I felt acutely the responsibility of making my own decision.  I felt the weight of my father’s trust.  I agonized over the decision, pondered the importance of the Sabbath day, and prayed for guidance.  In the end I decided not to go.

The “Why” Trumps the “What”

You may have seen a plaque mothers are tempted to hang on the kitchen wall that reads, “Because I’m the Mom, That’s Why.”  When parents want a child to obey a rule, often they don’t take the time to explain the principle, or the “why” behind the rule.  The problem is, as soon as Mom turns her back, the kid breaks the rule.

A mission leader, a bishop or a parent may find it easier to point to a list of rules than to teach correct principles.  It would have been easy for us to point to the old missionary manual every time we wanted a missionary to be obedient. Then we didn’t have to be the bad guys, setting strict rules, we just let the manual do the work.  However, without understanding the “why” the missionary would never develop a testimony of the rule, and as soon as someone was not watching he would break it.  Therefore, we embraced the idea of principle-centered learning enthusiastically.

Giving up their worldly music was extremely difficult for some of our missionaries.   The missionaries had long debates about which songs invited the sprit and which ones didn’t.  We weren’t even familiar with some of their music so we couldn’t have participated in these debates if we wanted to.  Instead, we taught a principle: the things you ponder are the things about which you will receive revelation.  In addition, music frequently takes us back to the place and time where we previously enjoyed the music.  Therefore, if they were listening to a song that caused them to ponder their life before the mission, it would be difficult to receive revelation for their area, revelation they needed in the mission.  Once the missionaries understood the “why” behind appropriate music, they chose to avoid music that distracted them from their purpose.

The Risk of Failure

Although some of our missionaries embraced the list of thou shalt not’s, others were delighted with the change in the missionary manual—so delighted that we feared they might just use their newly discovered independence to embrace the standards of the world.  For example, our tried-and-true handbook used 53 words and a picture to help the missionaries know how to wear their hair.  “Missionary Standards for Disciples of Jesus Christ” uses ten words.  At the time “Missionary Standards for Disciples of Jesus Christ” was introduced the young men of the world were wearing their hair in a distinctive style: shaved close to the head on the bottom and as long as they could grow it on the top.  We wondered with this new emphasis on individual decision making if our missionaries would choose the standards of the world.  Some barbers the missionaries used were already cutting the missionaries hair in this worldly style, without regard to what they requested.  We held our breath to see what the missionaries would do.  Fortunately, our elders did not embrace the standards of the world.  They chose to look like missionaries.  Why didn’t they embrace the popular style?  Because they understood the principle.  They were not only told “what” their behavior should look like, but “why.”  When they understood the “why” they didn’t even need to be told “what.”

Many have responded to the new “For the Strength of Youth, a Guide to Making Choices” with comments like, “It’s about time,” or “What took so long?”  I believe there are good reasons the change came about now, and not before.  That, however, is a topic for another article.  I’ll end this one by rejoicing that the change occurred at all.