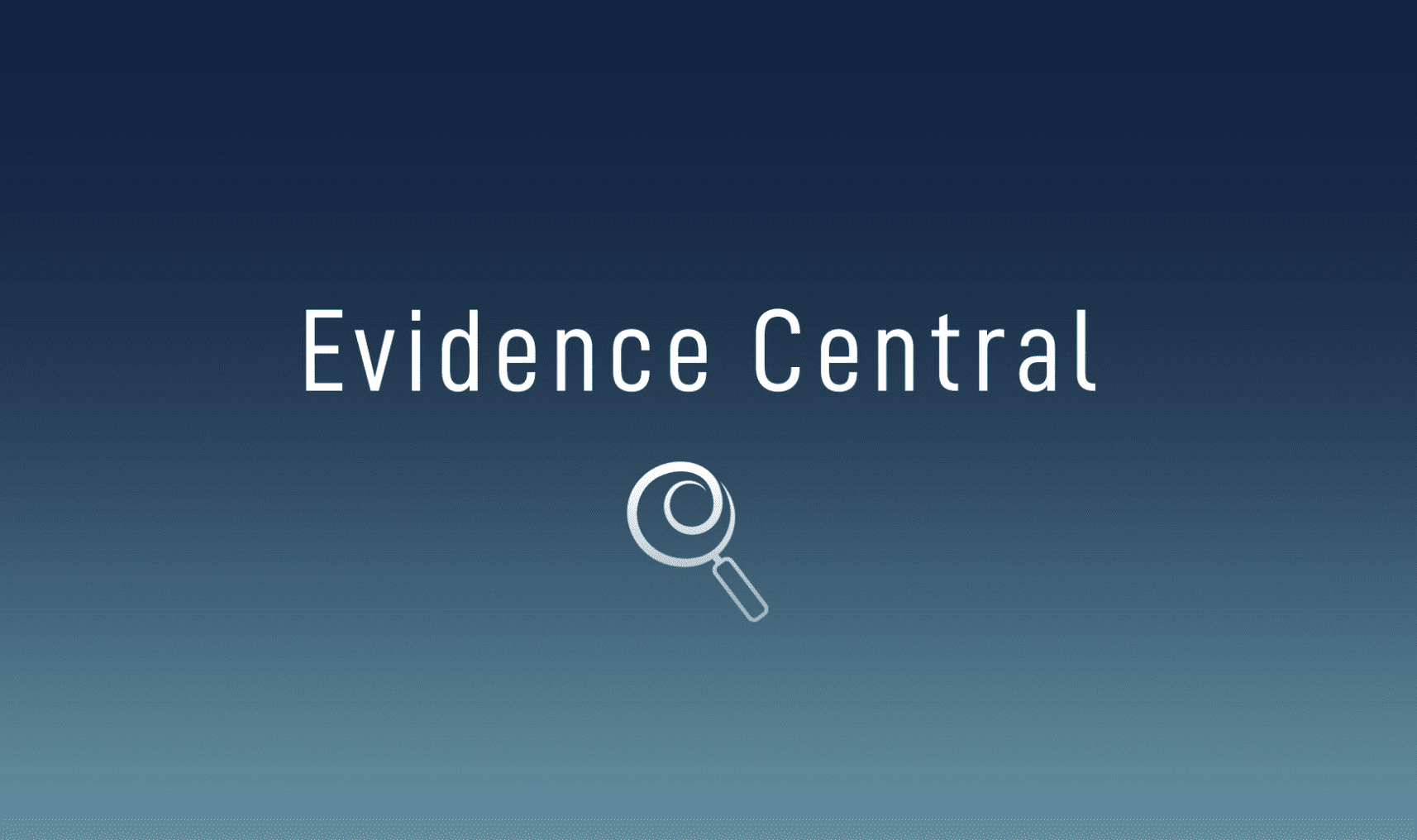 For many decades now, evidences pertaining to the Restoration of Jesus Christ’s Gospel and Church have been brought to light through careful study and analysis by interested scholars and researchers. These evidences largely help authenticate Joseph Smith’s revelations about the ancient world, including his translations of ancient texts like the Book of Mormon, Book of Moses, and Book of Abraham. Other evidences come from analysis of the miraculous foundational events pertaining to the history of The Church of Jesus Christ of Latter-day Saints, such as the translation of the Book of Mormon or the experiences of the Three and Eight Witnesses.

Carefully studying this evidentiary data can enrich, inform, and ultimately strengthen faith in Jesus Christ and in the Restoration. Unfortunately, most of these evidences are scattered throughout scholarly books and articles that many Latter-day Saints and other potentially interested readers may not know exist. Furthermore, many evidence-related publications can be quite lengthy and filled with technical concepts and academic language. To help make this body of research more accessible and understandable to the general public, Book of Mormon Central has developed a new website called Evidence Central, which has been made possible through the generous support of the Charis Legacy Foundation..

Evidence Central has already begun the process of identifying, categorizing, and helpfully summarizing this research. Part of this effort has involved the creation of well-documented and richly illustrated articles that summarize particular evidences related to the Restoration. These short articles (each one referred to as an “Evidence”) strive to accurately and simply describe the nature and value of each Evidence without overstating its significance.1

At launch, Evidence Central has published more than 100 Evidences, all of which pertain to the Book of Mormon. We have plans to publish hundreds more and to expand their scope to include Joseph Smith’s other revelations about the ancient world.

Because this is a lot of information to keep track of, Evidence Central is also creating interfaces (via web applications) that will allow users to access and navigate these Evidences in a variety of ways. The first of these interfaces has already been created and is currently the home page for Evidence Central. It allows users to explore Evidences by category, which is a great way to get an overall feel for what types of evidence exist and how they relate to one another.

Along with ongoing efforts to improve this interface, plans are already in place to create several more. We hope that when completed these interfaces can appeal to a wide range of audiences, and that they will give users different ways to identify, navigate, and evaluate the many evidences of the Restoration.

On June 8, 2017 Book of Mormon Central created a YouTube channel called BMC Studios. This channel features videos that highlight various categories of evidence which support the Restoration. Because this channel closely aligns with the purposes and content of Evidence Central, BMC Studios channel has now been rebranded as Evidence Central. You can also receive updates about Evidence Central through our Facebook page.

How Can This Resource Help You?

Evidence Central can appeal to a variety of audiences. First and foremost, it can help members of The Church of Jesus Christ of Latter-day Saints who for whatever reason may be struggling to maintain their faith in the Restoration. For Latter-day Saints with strong and vibrant testimonies, Evidence Central can give them the tools they may need to help others who are struggling with doubt, particularly if that doubt is partly fueled by concerns over Joseph Smith’s calling as a prophet.2 Plus, it never hurts to strengthen one’s own testimony in a variety of ways. As Elder Jeffrey R. Holland has put it, “truly rock-ribbed faith and uncompromised conviction comes with its most complete power when it engages our head as well as our heart.”3

This resource can also be helpful for Latter-day Saint scholars and others who may be interested in the intellectual defense of Latter-day Saint beliefs. The evidences of the Restoration are vast and varied, and even scholars with many years of experience may find it valuable to have these evidences so helpfully categorized and summarized. Moreover, in many instances, Evidence Central offers new evidentiary details, analysis, and synthesis that is original and unique to our website.

Finally, Evidence Central may be an effective missionary tool in some situations. While this resource should never replace the primary message of the Restoration, as outlined and explained in Preach My Gospel, it might in some cases help resolve concerns or doubts that stand in the way of gaining or retaining a testimony. Hopefully, an awareness of such evidences can help create a situation in which a spiritual witness can flow into the heart and mind of an honest seeker of truth, unimpeded by unnecessary intellectual doubt or disbelief.4

How Can Evidence Strengthen Testimonies?

We acknowledge that a testimony of Jesus Christ and the Restoration should be primarily grounded in personal spiritual experiences—or spiritual evidence. However, God has also approved of seeking other types of knowledge, particularly in cases where individuals are struggling with their faith: “as all have not faith, seek ye diligently and teach one another words of wisdom; yea, seek ye out of the best books words of wisdom, seek learning even by study and also by faith” (D&C 109:7). Evidence Central helps fulfill this divine mandate by making relevant evidence from some of the “best books” more accessible and understandable than ever before.

It should also be noted that a number of Church leaders have approved of defending our faith by supplementing our testimonies with intellectual reasons or evidence.5 For instance, Elder Jeffrey R. Holland has taught,

Our testimonies aren’t dependent on evidence—we still need that spiritual confirmation in the heart of which we have spoken—but not to seek for and not to acknowledge intellectual, documentable support for our belief when it is available is to needlessly limit an otherwise incomparably strong theological position and deny us a unique, persuasive vocabulary in the latter-day arena of religious investigation and sectarian debate. Thus armed with so much evidence … we ought to be more assertive than we sometimes are in defending our testimony of truth.6

While these evidences certainly don’t “prove” that Jesus is the Christ or that Joseph Smith was a true prophet, they demonstrate that the spiritually-grounded testimonies held by so many Latter-day Saints are also supported by a diverse and robust body of scholarly research. Latter-day Saints have many good reasons—both spiritual and intellectual—to exercise faith in Jesus Christ and the Restoration.7

For further information about Evidence Central, see the FAQ at its website.8

1.Evidence articles are similar to the short articles called KnoWhys that Book of Mormon Central is known for producing. However, they differ in several ways. KnoWhys focus on informing readers about a particular topic in order to help them better understand its doctrinal or spiritual application to their lives. Not all KnoWhys present evidence-related content, and even when they do, that content is often mixed with other informative and devotional research. Evidence articles, by way of contrast, are specifically designed to help readers understand the nature and significance of a particular evidence of the Restoration. Even when they cover the same content as a KnoWhy, Evidence articles typically present that information differently.

2.Elder Neil L. Andersen has taught, “The negative commentary about the Prophet Joseph Smith will increase as we move toward the Second Coming of the Savior. The half-truths and subtle deceptions will not diminish. There will be family members and friends who will need your help.” Neil L. Andersen, “Joseph Smith,” General Conference, October, 2014, online at churchofjesuschrist.org.

3.Jeffrey R. Holland, “The Greatness of the Evidence,” Chiasmus Jubilee, August 16, 2017, online at bookofmormoncentral.org. For a transcript of this talk, see “Elder Holland Speaks at Book of Mormon Chiasmus Conference,” at newsroom.churchofjesuschrist.org.

4.As stated by the philosopher Austin Farrer, “Though argument does not create conviction, the lack of it destroys belief. What seems to be proved may not be embraced; but what no one shows the ability to defend is quickly abandoned. Rational argument does not create belief, but it maintains a climate in which belief may flourish.” John W. Welch and J. Gregory Welch, Charting the Book of Mormon: Visual Aids for Personal Study and Teaching (Provo, UT: FARMS, 1999), chart 8.

6.Holland, “The Greatness of the Evidence,” online at bookofmormoncentral.org. For a transcript of this talk, see “Elder Holland Speaks at Book of Mormon Chiasmus Conference,” at newsroom.churchofjesuschrist.org.

7.See 1 Peter 3:15: “be ready always to give an answer to every man that asketh you a reason of the hope that is in you.”

8.Much of this blog post was adapted from information provided in the Welcome Page and FAQ at Evidence Central.