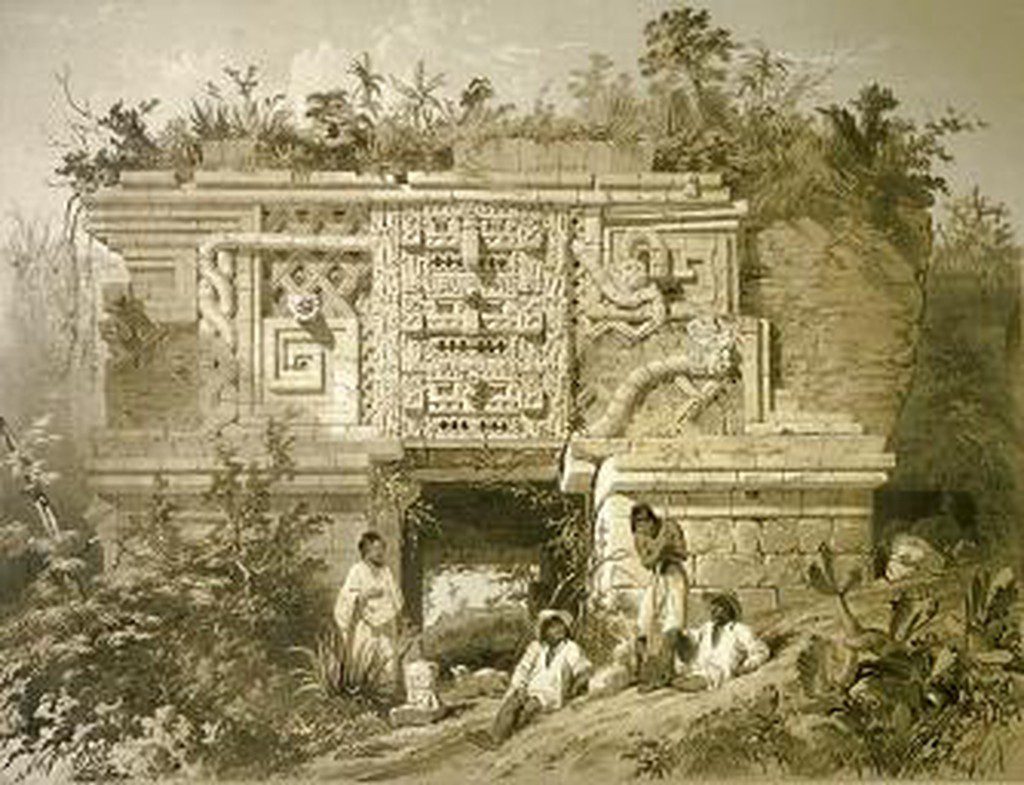 Nauvoo “Times and Seasons”: Searching for Book of Mormon Lands

Annually, October 1, is the anniversary of a little known event in early Church history that I believe, in consequence of significant research progress into 2019, now deserves recognition for identifying a region of major Book of Mormon lands and for initiating Book of Mormon archaeological historic research.

In a Times and Seasons editorial, October 1, 1842, the Prophet Joseph Smith after progressive study announced a discovery that the Book of Mormon “land southward” is located in Central America (Mesoamerica), which would be from the Isthmus of Tehuantepec as the narrow neck of land, south to Panama or at least Costa Rica, which as the Prophet pointed out, fits the description in Alma 22: 32 as the land that is “nearly surrounded by water.” [1] Joseph’s information resulted from studying an exciting book by explorer John Lloyd Stevens, Incidents of Travel in Central America, Chiapas and Yucatan, 1841, that for the first time was bringing major exposure to the outside world of magnificent ancient Maya ruins hidden in the jungles of Central America. And keep in mind, Joseph knew that in the Book of Mormon “the history of ancient America is unfolded” [2]  Can you sense his enthusiasm and flag waving to research it out?

John Lloyd Stephens and the Birth of American Archaeology

In 1830, American archaeology was unknown. John Lloyd Stephens, a New York Attorney, became an explorer when he traveled to Europe in 1834, then to the Middle East, returning to NY in 1836. He wrote several books about his travels on the other side of the Atlantic that became best sellers in America. In 1839, President Martin Van Buren commissioned Stephens to be a Special Ambassador to Central America. So Stephens, accompanied by artist and architect Frederick Catherwood traveled to British Honduras (now Belize) where they first came across Maya ruins at Copan.
John L.Stephens [3]

Joseph Smith Jr. at 14 years old was considered “uneducated”. Steadily he became an avid reader of history, politics, novels, and poets as well as studying foreign languages, primarily Hebrew and German.  During 1839-1842 as the Saints were establishing the city of Nauvoo, the Prophet Joseph Smith led his people in business, church administration, and temple building. [6] In 1839, the leaders of the Church began publishing the Times and Seasons periodical (the same year that John Lloyd Stevens began his explorations in Mesoamerica). Its motto, “Truth will prevail,” expressed a goal to promote truth, and correct falsehoods, and was the main organ for publishing truths pertaining to the restored gospel to the Church members and the world. Many of the Prophets revelations, and his Book of Abraham translation, for instance, appeared in print for the first time in the Times and Seasons. In the spring of 1842 (May 11), in consequence of too many errors appearing in print, the Prophet Joseph Smith took over the editorship and announced his personal responsibility for the contents of the paper. [7]

During the next six months he endeavored to raise the paper’s standard of excellence (May-Nov. 1842). One of the distinctive features of Joseph’s six month editorial career was the attention given to antiquities as they might relate to the Book of Mormon. In the November 15, 1842 edition, he announced that Elder John Taylor should be the Editor to maintain the high quality of excellence that had developed. [9]

Shortly after Stephens’ 1841 Incidents of Travel in Central America, Chiapas and Yucatan (Vol. I and II) on Mesoamerica hit the book market, Joseph received them as a gift and commented in his personal Journal History about their importance to the Book of Mormon. On June 25, 1842, Joseph recorded in his Journal that Stephens and Catherwood had succeeded in collecting in the interior of Middle America “a large amount of relics of the Nephites, or the ancient inhabitants of America treated of in the Book of Mormon,” which relics had recently landed in New York. [10] While the relics were judged to be of the “Nephites,” that was of course unknown, but illustrates Joseph’s frame of reference at that early date. The ruins of ancient Maya civilizations were completely shrouded in mystery, yet he held the key in the Book of Mormon to unlocking the lost history of ancient America civilizations.

In the September 15th 1842 issue of the Times and Seasons, an extract from John Lloyd Stephens on the antiquities at Palenque, Mexico was published with editorial comments. The scripture about the narrow neck of land geography in Alma 22:32 was cited, implying reference to the Isthmus of Tehuantepec which is not far from Palenque. The next issue two weeks later (October 1, 1842) [1] followed up with specific details that show studied progress to try and locate Book of Mormon lands and ruins. That front page editorial is particularly significant as the Prophet’s last and most specific statement on geography while he was the official editor, so it deserves our attention.    Map of Mesoamerica showing antiquities + Palenque –       [11]

The October 1, 1842, editorial titled “Zarahemla” precedes an extract from Stephens on the site of Quirigua in Guatemala. The opening statement expresses his active interest in exploring possible locations of Book of Mormon lands: “Since our ‘Extract’ was published from Mr. Stephens’ ‘Incidents of Travel,’ & c. [preceding September 15 issue], we have found another important fact relating to the truth of the Book of Mormon. . . .The city of Zarahemla, burnt at the crucifixion of the Savior, and rebuilt afterwards, stood upon this land as will be seen from the following words in the book of Alma.” [1]

The editorial then quotes Alma chapter 22: 32 about the land located southward of the narrow neck of land being nearly surrounded by water. The second page of Stephens’ book contains a map of Central America charting his explorations from Costa Rica northward to Tabasco on the Gulf of Mexico near the Isthmus of Tehuantepec as the “narrow neck of land,” and into Yucatan. [1]

The editorial continues: “It is certainly a good thing for the excellency and veracity of the divine authenticity of the Book of Mormon, that the ruins of Zarahemla [land not city] have been found where the Nephites left them.” [1]

Joseph also stated: “It will not be a bad plan to compare Mr. Stephen’s ruined cities with those in the Book of Mormon; light cleaves to light, and facts are supported by facts. The truth injures no one. . . .” [1] Joseph Smith had the courage to press forward in Book of Mormon archaeology/history research, “to assist the Saints in establishing the Book of Mormon as a revelation from God,” which was his last statement before the Oct. 1, 1842 extract.

The Prophet, as he was concluding his editorial career, seems to assume the Saints would continue to seek knowledge from researching antiquities to add material witness of the authenticity of the Book of Mormon. At least, that is how I read it. As such, I propose Joseph’s initial study and comments of Stephens’ writings in the Times and Seasons in 1842, was the beginning of Book of Mormon archaeology, and may have even been the first invitation to pursue archaeological investigations of Stevens’ ruins in Middle America.

The Book of Mormon exploration challenges were not idle words. Seven months later President Smith’s clerk delivered from his office a proclamation to the Times and Seasons, dated May 15, 1843, titled “To the Saints Among All Nations,” announcing that according to “divine direction,  . . . it appears to be the duty of the members of the Church of Jesus Christ of Latter Day Saints, to bring to Nauvoo, their precious things, such as antiquities, . . . petrifactions [fossils] as well as inscriptions and hieroglyphics, for the purpose of establishing a Museum of the great things of God, and the inventions of men, at Nauvoo.” [13]

This Museum development would obviously have included collections that explore possible Book of Mormon antiquities, but due to limited knowledge, it would have been very circumstantial. Broad interest included all nations and peoples past and present. What this says to me is that knowledge from the past in any specific area of interest, including Book of Mormon studies, should be inclusive not exclusive. In other words, it can best grow and be understood and accepted, not in isolation, but in proportion to knowledge expanding in neighboring areas from the past to the present. Knowledge of Book of Mormon history and culture is now beginning to be understood and appreciated within Mesoamerican civilization. As we are able to discover more accurately where and how it fits, research is also reaching outward to explore migration relationships of Mesoamerican-Book of Mormon peoples to neighboring ancient cultures in North and South America.

Just as Stephens’ exploration of ancient Maya ruins was the beginning of American archaeology, from the perspective of the early Saints, Stevens opened the door to exploring Book of Mormon lands. Some of the Classic Maya ruins that Stevens explored and Catherwood drew are post period Book of Mormon. However, in recent years Mayan archaeological research exploration is revealing that many Maya ruins overlay earlier Book of Mormon period ancient civilizations that were settled in Nephite-Mulekite times, as well as earlier Jaredite times as described in the Book of Mormon.

John Taylor, as editor of the Times and Seasons in 1843, expressed the view that the Lord may have designed the coming forth of the Book of Mormon before any knowledge of related ruined cities was known, so that the world could produce a material witness. And it seemed miraculous to him that Stephens’ discoveries of ancient Maya ruins came so soon, about 10 years after the publication of the Book of Mormon.

I pay tribute to the Prophet Joseph Smith and his associates for the vision they gained so early about where to explore, and for their conviction that it is important and worthy of our dedication and sacrifices to pursue archaeological, geographical, and historical research of lands of the Book of Mormon.

The United States is the promised land foretold in the Book of Mormon—a place where divine guidance directed inspired men to create the conditions necessary for the Restoration of the gospel of Jesus Christ. It was the birth of the United States of America that ushered out the Great Apostasy, when the earth was darkened by the absence of prophets and revealed light. It was no coincidence that the lovely morning of the First Vision occurred just a few decades after the establishment of the United States. L. Tom Perry, Ensign, Dec 2012 p29

Thanks for information new to me. The more I learn about the veil between what Joseph knew by divine intervention and what he didn't know because of the limitations of mortality and information available at those contemporaneous times, the more I am awed by the spiritual insight it allows us in understanding the role of a prophet and the example it can be to each of us: we can gain at least a glimpse of spiritual truths even when limited to mortal perspective forced upon us with everything we learn while mortal.