“My Presence Shall Go With Thee”– Come, Follow Me for Sunday School: Exodus 24; 31-34 | Meridian Magazine 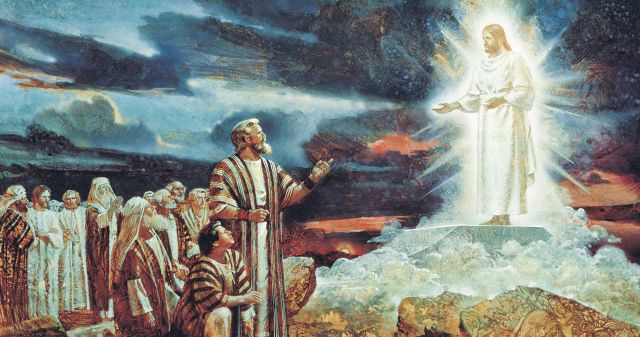 There are two kinds of people: Those who repent, and those who refuse to repent.

“What about the righteous? Aren’t they a third kind?”

No, to be righteous is to be repentant. When we take upon ourselves the name of Christ, we enter into a covenant with Him that we are “willing” to keep His commandments. But to be “willing” to do a thing and to actually do it are not always the same. That’s why when we take the sacrament, we are also promising to repent when our willingness fails us.

Then, when we are in the process of repentance, the Lord promises “my presence shall go with thee” (Exod. 33:14).  President Russell M. Nelson has said:

“Too many people consider repentance as punishment—something to be avoided except in the most serious circumstances. But this feeling of being penalized is engendered by Satan. He tries to block us from looking to Jesus Christ, who stands with open arms, hoping and willing to heal, forgive, cleanse, strengthen, purify, and sanctify us” (“We Can Do Better and Be Better,” April 2019 General Conference).

When we are repentant, therefore, we are in the healing, cleansing, sanctifying presence of the Savior.

Every covenant consists of an oath and a blessing for keeping the oath; a penalty for breaking the oath; and a sign or token to symbolize the oath.

For example, the Sabbath is a sign of the covenant. “My sabbaths ye shall keep,” the Lord says, “for it is a sign between me and you throughout your generations; that ye may know that I am the Lord that doth sanctify you” (Exod. 31:13). When asked why I keep the Sabbath, I reply that it is a token of the covenant I have made with my Heavenly Father. It is a symbol of my commitment to honor Him and to keep my covenant. It is a sign of my love for Him. Of course, Sabbath-keeping blesses me with peace of the spirit and a closer relationship with Him.

President Nelson says, “In my much younger years, I studied the work of others who had compiled lists of things to do and things not to do on the Sabbath. It wasn’t until later that I learned from the scriptures that my conduct and my attitude on the Sabbath constituted a sign between me and my Heavenly Father. With that understanding, I no longer needed lists of dos and don’ts. When I had to make a decision whether or not an activity was appropriate for the Sabbath, I simply asked myself, ‘What sign do I want to give to God?’ That question made my choices about the Sabbath day crystal clear” (“The Sabbath Is a Delight,” Ensign, May 2015, 130).

The Lord also defined the penalty for breaking the Sabbath covenant: “Every one that defileth it shall surely be put to death: for whosoever doeth any work therein, that soul shall be cut off from among the people” (Exod. 31:14). This penalty is harsh, and it is still in effect. Unless they repent, those who persistently desecrate the holy Sabbath will die the “second death”—which is to be cut off from the presence of the Lord (see Alma 12:16).

The Israelites in the wilderness caught a man gathering wood on the Sabbath. Unsure of what to do with him, they brought him to Moses, who inquired of the Lord: “And the Lord said unto Moses, The man shall be surely put to death: all the congregation shall stone him with stones without the camp” (Num. 15:35).

But centuries later, when the hungry disciples of Jesus walked through a wheat field on the way to the synagogue on the Sabbath, they “plucked the ears” and ate them. The Pharisees were watching and asked, “Why do they do on the sabbath day that which is not lawful?” The Savior replied, “The sabbath was made for man, and not man for the sabbath” (Mk. 2:23-27). In other words, the Lord intended the Sabbath as a blessing of rest and recommitment, not as a “list of dos and don’ts.”

Why, then, the difference between the responses of Moses and Jesus to these situations?

Obviously, there must have been a crucial distinction between the motives of the wood gatherer and the disciples of Christ. The wood gatherer seems to be flaunting his indifference to the Lord’s commandment by doing what should have been done beforehand. He exemplifies the “stiffneckedness” of the house of Israel (Exod. 33:3); thus, his punishment served as an example to the people of the death that awaits the proud and the hard of heart.

A key purpose of the law of Moses was to soften the hearts and necks of Israel. “The Lord God saw that his people were a stiffnecked people, and he appointed unto them a law, even the law of Moses” (Mosiah 3:14). Although we don’t know, we might assume from his act of open defiance that the wood gatherer was unrepentant, and “if a man repenteth not . . . mercy hath no claim on that man” (Mosiah 2:38-39). His fate is a caution to those who break their covenants through pride or indifference.

By contrast, the disciples of Christ were going about the Lord’s work, on their way to worship in the synagogue. They were hungry, and the law of Moses specifically permitted them to take a handful of grain as they went (see Deut. 23:25). Necessary work is lawful on the Sabbath, such as “preparing food with singleness of heart” (Matt. 12:11; D&C 59:13). So the intent of the heart matters in questions of justice and mercy.

Now, as we read the Old Testament, we might ask, “Why were the penalties for breaking the covenant so harsh?”

Moses set down this law: “Thou shalt give life for life, eye for eye, tooth for tooth, hand for hand, foot for foot, burning for burning, wound for wound, stripe for stripe” (Exod. 21:23-25). The law of justice requires exact compensation for damage—not retaliation but perfect restoration of that which was lost or hurt. “The work of justice cannot be destroyed,” says Alma, “or God would cease to be God” (Alma 42:13). So, the strict work of justice was encoded in the law of Moses.

In practice, however, the penalties were probably not implemented very often, according to historians: “In fact, there is little evidence that many of these sanctions were ever actually carried out in ancient Israel. Only in the case of premeditated murder was there the added stricture of ‘Do not accept a ransom [satisfaction] for the life of the murderer who deserves to die’ (Num. 35:31)” (Walter Kaiser, Jr., Peter H. Davids, F.F. Bruce, and Manfred T. Brauch, Hard Sayings of the Bible, Downers Grove IL: IVP Academic, 1996, 162).

The law required death for some twenty offenses, but in nearly every case offenders could offer a “ransom”—money or other property in restitution—to save their lives. The exception: Because a murderer could not restore life, his or her life must be taken.  The word “ransom” means “redemption.” The Hebrew word in Numbers 35:31, kopher, is related to the word kippur, meaning “covering” or “atonement.” In other words, repentant persons should make what restitution they can as a token of their repentance, while the Atonement of Christ “answers the ends of the law unto all those who have a broken heart and a contrite spirit” (2 Ne. 2:7).

On the other hand, those who refuse to repent out of pride or a hard heart face the full penalty of the law on their own. The Lord does everything possible to convince the unrepentant to change. He pleads with them through the prophets, He shows them the consequences of their actions through plague and warfare, He “suffers long” with them because His essence is charity. But when their “iniquity is full,” the flood of consequences cannot be held back. “In that day that they are fully ripe in iniquity they shall perish” (2 Ne. 28:16): The law of justice requires it.

For this reason, Israel was commanded to destroy whole peoples, including the Amalekites and the Amorites (Canaanites). Centuries before, the Lord had told Abraham that his descendants would suffer “in a land that is not theirs” (Egypt) for four hundred years—“until the iniquity of the Amorites is full” (Gen. 15:13-16). Not until the totally degraded peoples occupying Canaan were doing their worst—among other things, burning their own children as an offering to their gods—did the Lord let the armies of Israel loose upon them.

Of course, the Lord took no pleasure in their destruction and no doubt wept over them: “Wherefore should not the heavens weep, seeing these shall suffer?” (Moses 7:37).

One reason the Lord wanted repugnant practices swept from the Promised Land was to protect the covenant people from their influence. Unfortunately, that influence was strong. When Moses went up Mt. Sinai for forty days to receive the law of the Lord, the Israelites backslid into idolatry: “When the people saw that Moses delayed to come down out of the mount, the people gathered themselves together unto Aaron, and said unto him, Up, make us gods, which shall go before us; for as for this Moses, the man that brought us up out of the land of Egypt, we wot not what is become of him” (Exod. 32:1). So they made a golden calf, threw a party, and got drunk.

We see this pattern too often in the Old Testament whenever Israel is put to the test.  “Our fathers dealt proudly, and hardened their necks,” says the prophet Nehemiah,” and hearkened not to [the Lord’s] commandments” (Neh. 9:16). We see it today among those who say in their hearts, “The Lord delayeth his coming . . . [they] eat and drink with the drunken” (Matt. 24:48-49).

Fortunately, after Moses chastised them, the Israelites repented: “They mourned: and no man did put on him his ornaments. . . . all the people rose up and worshipped, every man in his tent door” (Exod. 33:4, 10). Although guilty of gross violation of their covenants, they humbled themselves and the Lord forgave them.

Years later, Nehemiah praised the Lord for the mercy shown to repentant Israel: “When they had made them a molten calf, and said, This is thy God that brought thee up out of Egypt, and had wrought great provocations; yet thou in thy manifold mercies forsookest them not in the wilderness: the pillar of the cloud departed not from them by day, to lead them in the way; neither the pillar of fire by night, to shew them light, and the way wherein they should go” (Neh. 9:18-19). Like the Israelites in the desert, we need that light to guide us through our mortal journey.

Like the Israelites, we too often wander from the path and need to repent. And if we are repentant, “His presence will go with us.” As President Nelson says, “Whether you are diligently moving along the covenant path, have slipped or stepped from the covenant path, or can’t even see the path from where you are now, I plead with you to repent. Experience the strengthening power of daily repentance—of doing and being a little better each day.”