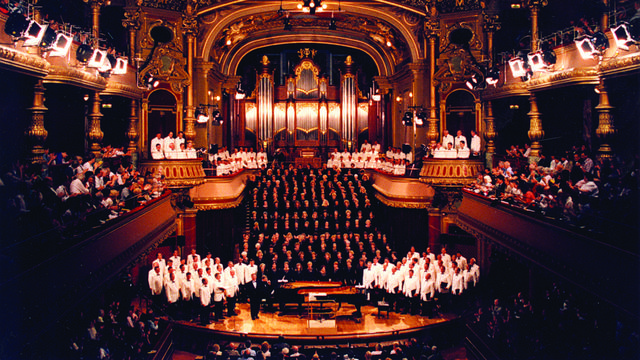 SALT LAKE CITY — For the first time in 18 years, the world-renowned Mormon Tabernacle Choir and Orchestra at Temple Square will perform in Europe. The 20-day tour to eight European cities is scheduled from Monday, June 27, through Saturday, July 16, 2016.

The international tour will kick off with performances in Berlin and Nuremberg, Germany, before heading to Vienna, Austria, and Zurich, Switzerland. Then the choir and orchestra will head back to Germany for a concert in Frankfurt, followed by concerts in Brussels, Belgium, and Rotterdam, Netherlands, before concluding in Paris, France. Venue and ticket information will be announced at a later date.

As president of The Church of Jesus Christ of Latter-day Saints, Thomas S. Monson is an adviser to the Mormon Tabernacle Choir. “Our goal is for the choir and its companion Orchestra at Temple Square to be a shining example of the musical arts to all the world,” said President Monson.

“With the announcement of this European tour, I am delighted that these noted ensembles will have the opportunity to touch the hearts of people in multiple nations through their magnificent music,” added President Monson. “This tour will be an important step forward as the choir and orchestra continue to build bridges of friendship and understanding across the globe as ambassadors of The Church of Jesus Christ of Latter-day Saints.”

Choir president Ron Jarrett said, “One of my primary goals when I became the choir’s president in 2012 was to start touring internationally again.” He continued, “Through social media we have been able to reach audiences far and wide. Now with this tour, we are thrilled that for the first time in nearly two decades international audiences will be able to enjoy the music of the choir in person.”

“With the challenges of today’s world, we are excited to share the joy and peace the music of the choir brings, which knows no boundaries of age or nationality,” added Jarrett.

The choir and orchestra usually tour every two years. So it came as a complete surprise when, just after the choir returned on July 7 from a successful 10-day tour to the Atlantic Coast, the choir’s president announced next year’s international tour to the performers during their Thursday evening rehearsal.

The Mormon Tabernacle Choir first performed in Bavaria, Germany in 1973.

“It was a very emotional and heartfelt reaction,” said Jarrett. “The choir and orchestra members are all volunteers and literally dedicate their lives to blessing the lives of others through music. This is more than a dream come true for them; it is a humbling, well-deserved honor.”

Since its first tour outside of Utah in 1893, the choir has toured extensively across the United States and abroad. In addition to its five previous tours to Europe, it has performed in music capitals from Israel and Russia to Japan and Australia. Its travels have also included performances at the inaugurations of six U.S. presidents. A full complement of the orchestra has traveled on tour with the choir since 2005.

The 360-voice choir, accompanied frequently by the 200-member orchestra, can also be heard weekly as part of the “Music and the Spoken Word” broadcast. This 30-minute program is the world’s longest continuing network broadcast and currently airs on over 2,000 radio, TV, cable and satellite stations worldwide.

The choir and orchestra are active recording artists with their own recording label, Mormon Tabernacle Choir®. They are currently completing work on a new full-length recording of Handel’s “Messiah,” which will be released in March 2016.