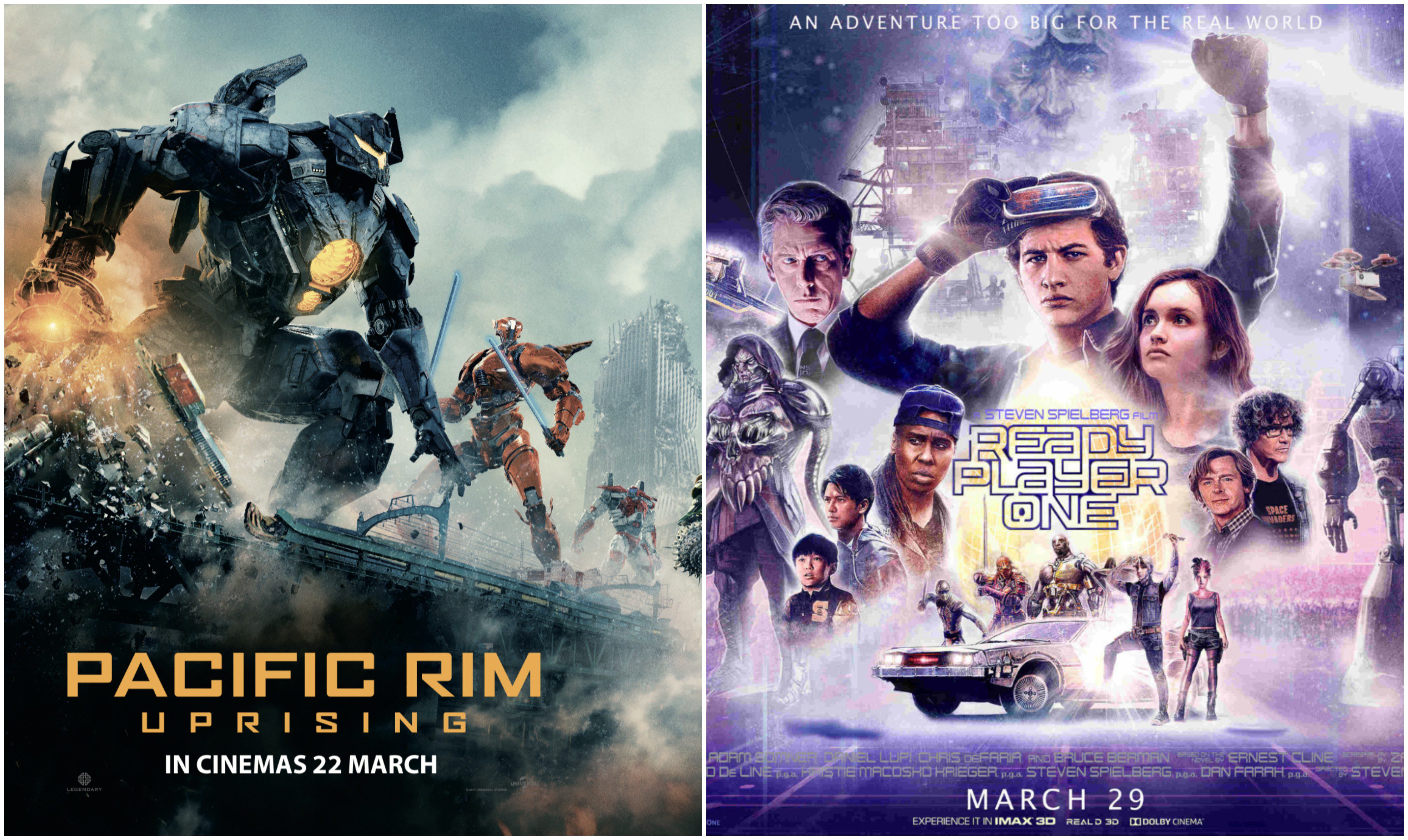 Mormon Moviegoers Reviews for Your Weekend: ‘Ready Player One’ and ‘Pacific Rim: Uprising’

‘Ready Player One’ as reviewed by Trina Boice:

WHAT’S READY PLAYER ONE ABOUT?

The creator of the largest virtual reality world ever, called the OASIS, dies and leaves a challenge to anyone who can find three invisible keys that lead to a hidden Easter egg to win a fortune and ownership over the OASIS. Directed by Steven Spielberg, it is full of imagination, fun, action, romance, humor, and a moral lesson. Game on! (Pre-order the film here)

If you’re not into video games, this movie is probably not for you. I don’t really play video games, but I still really enjoyed it. I have four sons who played video games for many years growing up, so I was exposed enough to most of the characters that make an appearance in this movie that I got a kick out of it all. One of my sons is now living his dream as a 3D character artist for the hugely successful video game company Blizzard.

In case you’re wondering, The Church of Jesus Christ of Latter-day Saints does not oppose all video games. There are many that are clean, challenging, and fun. Elder M. Russell Ballard of the Quorum of Apostles explained: “One of the ways Satan weakens your spiritual strength is by encouraging you to spend large blocks of your time doing things that matter very little.” (“Be Strong in the Lord,” Ensign,July 2004, 13). Parents need to help kids learn how to moderate their time playing video games, as well as choose games that follow the guidance of the Thirteenth Article of Faith.

The movie itself is classic Spielberg with absolutely fantastic action sequences and imagination. The special effects are really well done and blend easily from virtual reality environments into scenes with people in reality. Older folks will probably claim the movie is on sensory overload (they’re right), but the younger crowd will feel like they’re right in the middle of playing a video game.

The movie is overflowing with references that span several decades of movies, music, and pop culture, focusing mostly on the 1980’s. While the main character is looking for the grand prize, there are TONS of fun Easter eggs for the audience to look for and enjoy during the entire film. At one point, there is a scene with a famous Anime motorcycle that Spielberg is notorious for having rejected 30 years ago, dismissing it as “unsellable” for film. It’s fun to see how he now embraces and celebrates it on the big screen.

There is some humor and heart in the film with most of the comic relief provided by a scary-looking, yet hilarious character named I-R0k, voiced by T. J. Miller. Tye Sheridan did a great job as the protagonist Wade/Parzival, although the character arc doesn’t stretch as much as some movie critics would like. Alvin Silvestri offered an energizing and fun musical score. Originally, Steven Spielberg’s favorite composer, John Williams, was going to tackle the project, but he had to step away to finish his work on another Spielberg film, The Post.

The dystopian real world where the protagonist lives is ugly and dreary, which makes the lure of the colorful, exciting virtual world that much more appealing. Satan is quite skillful at dangling objects and lives in front of us that make us doubt what we have and want something else (see “How Do I Resist Temptation?” New Era, Dec. 2013). Parents will worry that their kids will want to play even more video games after watching this popcorn flick, but the final message will ease their minds.

There are a LOT of exposition scenes that tell us what’s happening and the movie drags a little bit towards the third act. If you can, try to see the movie in 3D, but it’ll still be fun without the glasses and extra fee. If you loved it and want more, check out the book that it’s based on, written by Ernest Cline. The movie adds to and deletes from the source material, frustrating true fanboys, but they both have something to offer. Cline actually mentioned Steven Spielberg in the original novel.

“Ready Player One” is rated PG-13 for tons of violence, bloody images, partial nudity, profanity, and some suggestive material. I was worried that the movie would glorify video games and encourage kids to plug into technology even more, but the message in the end is that we all need each other and real life.  I thought the ending was actually very sweet.

Things to be aware of:

‘Pacific Rim: Uprising’ is reviewed below by Jonathan Decker.

A decade after mankind triumphed over alien monsters, a new threat forces us to suit up in giant robot suits and fight back (Rent or buy it here)

Trading in Idris Elba and Charlie Hunnam for John Boyega and Scott Eastwood, this “new generation” sequel lacks the directorial flourishes Guillermo del Toro brought to the first film and the characters, while well-performed, are caricatures of every man vs. apocalypse movie you’ve ever seen. Still, when the monsters are unleashed and soldiers in giant robot suits get to battling them, there’s plenty of seat-rattling, eye-popping fun to be had.

There are a handful of moderate profanities, a raised middle finger, a briefly shirtless man, and plenty of robot vs. monster violence (with some alien blood and implied human casualties.

Do not undervalue the young and inexperienced; they may have talents and strength that we don’t see (see Alma 53:20-21). Don’t run from tragedy and pain; face what you’ve gone through head on in order to heal.

For more monster-on-the-loose fun, check out the original King Kong! Rent or buy it here.

Jonathan Decker is the clinical director of Your Family Expert. He is a licensed marriage and family therapist, husband, and father of five. Jonathan earned a masters degree in family therapy from Auburn University as well as a bachelor’s degree in clinical psychology from Brigham Young University. He is an actor, author, and television personality.