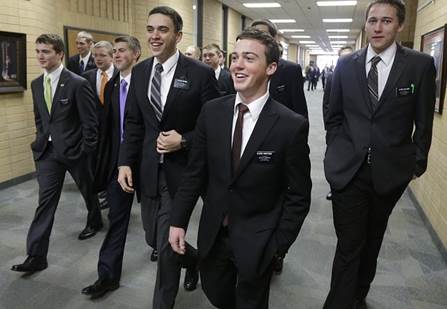 Missionary Work Over the Internet and at the Door‏

We can never fully realize the influence that we can have on other people.  Late one evening, Jessica was reading on the internet about religions and somehow landed on the Mormon.org website.  She read with interest about the restored gospel, and then chatted on-line with some missionaries located at the MTC in Provo, Utah. Eventually she got the courage to request that missionaries be sent to her home in Virginia.

My companion and I received the referral from Salt Lake City the next day as a text message on our cell phone.  We quickly drove to the address provided and knocked on her door.  We hoped that she would still be interested!  Fortunately, Jessica was happy to see us on her doorstep and was very receptive to our message.  Later as we started the more formal discussion, she loved the lessons.  She came with us to the local Church services the following Sunday and enjoyed the sermons and the spirit she felt in sacrament meeting.

We then invited her to be baptized.  After praying about such an important decision, she replied, “Well there is no sense in waiting!”  We were all very excited for her.   Her testimony was quickly blossoming and it was beautiful to behold.

But then one day, during the lesson regarding the law of chastity, Jessica explained to us that her boyfriend wanted her to move in with him.  She was seriously considering the idea, particularly since she was living on her own and it was very expensive.  After explaining more to her about the law of chastity, we told her that she knew what the right choice was and that it was important to obey God’s commandments.  She cried and said that she couldn’t make such a difficult choice at this time.  Things went quickly down-hill after that.

Jessica stopped attending church meetings and I was soon transferred out of the area. Jessica then moved to another city to live with her parents.  We lost contact with her, but the Lord knows all His sheep.  Even when we wander He knows where we are and what we need.

Months later, I received a letter from Jessica with the glorious news that she had been baptized.  She had somehow miraculously found the missionaries who were working near her parent’s home in another part of the state (located in another mission) and she had turned her life around.  She made the difficult decision to say no to her boy-friend, and the spirit confirmed to her that she should join the church.

After being baptized she immediately went to the temple to perform baptisms for the dead.  She then received her patriarchal blessing, received a calling to serve in her ward, and then decided to submit her application to serve a full-time mission for the Church.

We may not always see the fruits of our labors, but no effort is wasted in the service of the Lord.  He is the Master Gardener, and knows and loves each of His children.  Occasionally we are blessed to see someone we love accept the gospel, and set down deep spiritual roots. But many times, such as the missionaries in the MTC who taught Jessica over the internet late one night, they may never know all the results of their labors in this life.

Experiences like these have strengthened my conviction that this is the Lord’s true church, restored again on the earth through the Prophet Joseph Smith.

Your stories always bring tears of joy to my eyes. Having sent out 2 sons on missions and grandsons preparing to leave, I feel the Spirit very strong, even through the internet. I am so happy for Jessica and for the missionaries who took time and patience with her. How pleased our Heavenly Father must be and how he waits patiently for all his sons and daughters to enter into the fold.