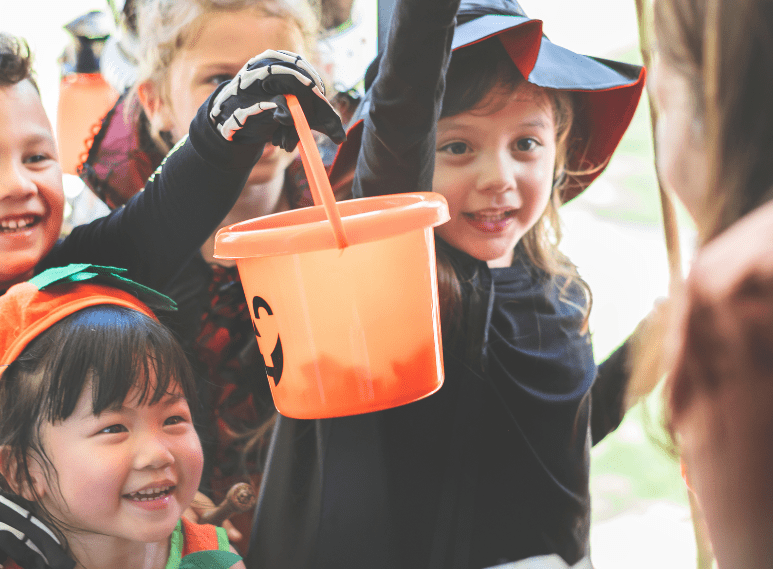 As school was ending on Friday, Lenny stopped by my locker to see me.  “Do you want to join us for some Halloween fun tomorrow?”

I didn’t know what he meant by helping kids stay healthy, but I knew I couldn’t go.  I had already promised my parents that I would carry out our family tradition.

My parents didn’t care much for Halloween.  Traditional trick-or-treating was out.  My father was not about to let his children roam around the neighborhood begging for anything, especially candy.  When I was young, we children had felt left out of the fun of the season.  That was why my parents came up with a plan on how we could celebrate the holiday in a way they felt was appropriate.

My mother made lots of homemade divinity candy and tons of cookies.  Then we dressed in costumes, and my mother drove us around the community, stopping only at the homes of the elderly.  Instead of begging for treats, we took them some.

Many of them were widows and were lonely.  They would invite us in and share stories, and it seemed to make life better for everyone.

When I became old enough to drive, I was the one who drove my younger brother and sister and me.  But this year my younger siblings had parties to go to, and it was left to me, alone, to carry on the family tradition.  I had already promised my mother that I would.

“You aren’t going around visiting old people again, are you?” he asked.  When I nodded, he laughed.  “You’re seventeen years old.  That kind of stuff is for kids.”  When I said I still planned to do it, he just shook his head.  “It’s your loss.  You’re going to miss out on all of the fun.  Maybe if you hurry you can catch the end of the party.”

He laughed again, and, along with all of the other guys with him, teased me a bit more before heading off to catch the bus home.

All day Saturday, as I worked, I thought about it.  I had never been to a Halloween party, and I kept telling myself that it would be okay if I skipped visiting the elderly this once.  But then I would remember how much some of the widows looked forward to my visit, and I knew it did matter.  I considered that maybe if I hurried, I could still have time at the party, too.

That evening, my mother prepared a box for me with lots of plates full of candy and cookies covered with plastic wrap.  On a piece of paper she listed out each house I was to visit.

As I stopped at each home, I was always invited in.  Often I was offered hot chocolate, and the visits would go on longer than I planned.

I saved the home of Mrs. Levin for last.  She was a sweet little widow whose children lived far away.  She was very lonely and loved having company.  My hope of catching some of the party faded as she told me about each of her children and then started sharing stories about when she and her husband were young.  I realized I wouldn’t be missed at the party, but my visit made a big difference to Mrs. Levin.

It was really late when I left Mrs. Levin’s home, and I figured the party was probably over, so I just headed home.  Even though I felt disappointment at missing the party, I had enjoyed my evening.

Lenny wasn’t at church the next day, so I found his mother.  “Where’s Lenny?” I asked, laughing.  “Is he still in bed from staying up too late partying?”

But there was no humor showing in her face as she answered.  “He and the others with him were arrested for mugging little kids for their Halloween candy.  They’re still in jail.”

Suddenly I knew what he meant by helping some kids stay healthy, and I was glad that that was one party I had missed.

Love this story. I had a similar experience my senior year in high school. My friends and I would often go hunting on Saturdays. One weekend, however, one of my friends had to work on Saturday so the group decided to go on Sunday again. My friends badgered me all week to go with them - I was tempted. I wanted my mother to be the "heavy" and tell me I couldn't go, but she said something to the effect of "You know how I feel about it, but you have to make your own decision." I decided not to go. Not only did I have an enjoyable Sabbath, but found out the next day that my friends ended up stranded in the desert with a flat tire. They didn't get home until the wee hours of the morning; their parents were worried sick about them (no cell phones in those days). I "missed" an outing that would have had a very painful outcome had I chosen to compromise my values.