Military Chaplains and the Book of Mormon | Meridian Magazine 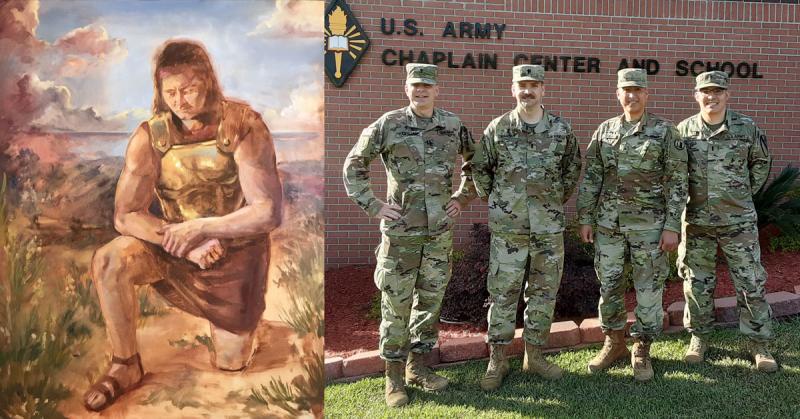 “Now behold, Helaman and his brethren were no less serviceable unto the people than was Moroni; for they did preach the word of God, and they did baptize unto repentance all men whosoever would hearken unto their words.”
Alma 48:19

Earlier this year, two of Book of Mormon Central’s associates went off to Fort Jackson to train as U.S. Army Chaplains. Noé Correa is part of our Spanish team and frequently contributes to BMC’s Spanish content. Noé graduated from Nazarene Theological Seminary and will become a National Guard chaplain. Tyson Yapias has helped on many projects behind the scenes including Chiasmus Day in 2017 and the ScripturePlus app. He graduated with his MA degree from BYU in 2019 and left BMC to become an Active Duty chaplain.

What is a Chaplain?

Chaplains can be found in all types of environments such as healthcare, hospice, police, prison, university, and military, to name a few. A chaplain’s role is that of a religious leader and pastoral counselor. Within the United States military, the Army, Navy and Air Force each have chaplain branches so that servicemembers can receive religious support. Chaplains are non-combatants who counsel soldiers after they face moral injuries and ethical dilemmas that war so often brings. Chaplains are also there to minister religious rites and sacraments in combat environments. Often, chaplains can be found praying praying for their soldiers before combat. During and after combat chaplains can be seen ministering to the wounded and dying. While chaplains have been part of the United States military since the American Revolutionary War, it was not until the Spanish American War (1898) that the first Latter-day Saint chaplain was appointed. During World War I, three more Latter-day Saints were called to be chaplains. Since then more and more Latter-day Saints have answered the call to serve for both God and country.

“Chaplains” in the Book of Mormon

In the Book of Mormon, we see examples of men who exemplify the characteristics of chaplains, even if they do not bear that official title. Mormon describes how the Nephites were led in battle by Captain Moroni, “a strong and might man . . . who was firm in the faith of Christ” (Alma 48:11–13). From the scriptures we see that Captain Moroni was a fierce warrior, not afraid to engage the enemy himself. At the same time, he was also a righteous disciple of Jesus Christ who encouraged his people to embrace faith in God. While Amalickiah garnered power and armies to fight against the Nephites, Moroni “had been preparing the minds of the people to be faithful unto the Lord their God” (Alma 48:7). Moroni understood, as chaplains do, that in times of great crisis, turning to the Lord can calm fears and give courage to do the right thing.

Another Nephite leader with chaplain-like qualities is Helaman, the son of Alma. Helaman commanded both the 2,000 stripling warriors and the remainder of the Nephite veteran army after the death of their commander (Alma 58). Helaman’s forces were in desperate need of supplies and reinforcements. The Lamanites took advantage of Helaman’s dire situation and repeatedly harassed them (Alma 58:6). It was in these “difficult circumstances” (Alma 58:7) that Helaman and his soldiers began to despair and be filled with fear (Alma 58:9).

Like a good chaplain, Helaman saw that his soldiers needed a morale boost. “Therefore we did pour out our souls in prayer to God, that he would strengthen us and deliver us out of the hands of our enemies, yea, and also give us strength that we might retain our cities, and our lands, and our possessions, for the support of our people” (Alma 58:11). Helaman knew that faith would strengthen them in that difficult time. With that faith “it came to pass that the Lord our God did visit us with assurances that he would deliver us; yea, insomuch that he did speak peace to our souls, and did grant unto us great faith, and did cause us that we should hope for our deliverance in him” (Alma 58:12). With this newfound resolve, Helaman and his battle-worn army went out against the Lamanites and were victorious. Chaplains know that faith can be empowering when nothing else seems to be going right.

After Mormon describes Captain Moroni as one who has the power to shake hell (Alma 48:17), he also describes other righteous men who “were no less serviceable unto the people than was Moroni; for they did preach the word of God” (Alma 48:19). It is rare to see stories of chaplains as great warriors or hear of a chaplain’s dramatic acts of heroism (though there are a few).1 Yet, chaplains are no less serviceable for military servicemembers because chaplains preach the word of God and are willing to go with soldiers into the most difficult of circumstances in order to lend that religious support.

For more information on the requirements to become an LDS chaplain see: https://www.churchofjesuschrist.org/military/chaplains?lang=eng

1.Prior to World War 2, criteria to be awarded the Medal of Honor included “combat with the enemy.” As such, the Four Chaplains of the U.S.S. Dorchester were excluded from receiving it. Therefore, Congress created a unique award for the Four Chaplains. For their story see: http://fourchaplains.org/four-chaplains/ . Nine other chaplains have earned the Medal of Honor. See: https://mohmuseum.org/chaplains/