Meet the Branch President of the Town Krešimir Ćosić Made Famous

From the Editors: We met this amazing man, Danijel Kolega, in our recent trip to Croatia–he is remarkable and so faithful. Meridian is sponsoring another cruise through the islands of Croatia this next September. To learn more about it (tell them Meridian sent you): CLICK HERE.

Having grown up attending branches of the Church of Jesus Christ of Latter-day Saints, I’ve watched Branch Presidents and other branch leaders up-close and personal as they toiled in the olive orchards to nourish, graft, and harvest the Lord’s vineyard. They’re a special breed of goodness.

These branches are so foundational and so much has come from them. My father was an Air Force officer in the 1950’s and 60’s, so we attended small branches or new small Wards in Spokane, WA; Dayton, OH; San Antonio, TX; Bellevue, NB; Champaign, IL; Frankfurt, Germany; and Long Beach, CA. We met in rented halls where we often had to come early to clean up the ashtrays and beer bottles before church. Today, in or close by every one of those cities, there’s a temple. It all began with the branch leaders.

A few months ago, we were privileged to attend the Zadar, Croatia Branch. Our group more than tripled the congregation but branch members were so joyful and accommodating to all the American visitors. In particular, the Branch President, Danijel Kolega, couldn’t have been more impressive. Danijel is not only the Zadar Branch President but the first counselor in the district presidency. He spoke to the congregation alternating between Croatian and English even though most of the Croatians spoke perfect English.

Recently, I interviewed Danijel. He tells so much of the struggle for religious freedom and other freedoms for Croatians the past 2,000 years and how his ancestors were instrumental in the fights for freedom in World War I & II, and then during the post-war communist takeovers. He loves to discuss his country and the gospel.

His deep roots nourished his testimony and love of God and country. When Danijel was only 14, he went with his mother and older brother to the local branch. The elders in suits put him off for some reason, but he liked the sisters. His investigation of the Church took several years, but he persisted until one day he realized he was feeling the Spirit and it all resonated with him. He was baptized a member of The Church of Jesus Christ of Latter-day Saints when he was 19. His older brother never joined but his younger brother is now the Branch President of the neighboring Split Branch.

Danijel served a full-time mission from 2013 to 2015 in Anaheim, California.

His wife, Antonija, is also Croatian and joined the church about a year after they started dating. Six months later in April 2018, they were sealed in the St. George temple. They have been blessed with two beautiful children: a 3-year-old girl, Savannah, and a 3-month-old son, Andreas Mate.

Danijel is a marine engineer, and they live in a house by the sea on Ugljan island across the inlet from Zadar.

As a youth, one thing that initially attracted him to the Church was the news that Kresimir Cosic, a national hero, belonged to The Church of Jesus Christ of Latter-day Saints – and was even a church leader.

Danijel tells many stories about “Kreso’s” conversion and the great help he gave in establishing the Church in Croatia. A story that greatly affected Danijel and other Croatians about “Kreso” is the dream or vision that “Kreso’s” mentor, Hugh Nibley had. Here’s what Danijel shared with me:

“At the 1972 Olympic Games in Munich, Kreso said he started to feel very uncomfortable with his considered move into professional basketball and the wild world that it contained. He reported that although he’d joined the Church in 1971 and did have an excellent testimony, he felt he should have much more depth of testimony if he was to go into professional sports. Kreso wrote, “I always knew that there was life before this life. And I knew that far more than that there is life after death…I prayed for one thing specifically. I prayed that if I want to go to the Olympics, I must know beyond a doubt the impressions I have, that there is a life before birth and that I really lived there and that I always have a feeling that somebody is watching over me here…I really wanted to know that for sure. And I wanted to know it beyond doubt.”

“I had never told anyone of my desire for a belief beyond doubt, but as I was praying for that (he was living at the time in the Travelodge in Provo), Brother Hugh Nibley who had baptized me, came to the Travelodge. He knocked on my door once and then just came in. He said, “Well, I have a message for you. I must tell you something.” I was glad to see him and hear his thoughts, so I sat down to listen. He said, “I’ve not told this to anyone, but in 1936 when I was in the mission field in Germany, I was at the train station, waiting (for the train).”

He described a vision. “I got … just taken from there….” He saw himself “completely and normally going to heaven…” He was brought to a very big council discussing what is going to be in the future. The meeting was proceeding with “many of the brethren.” Hugh’s grandfather [who was in the First Presidency] was there. In the group there were patriarchs, ancient worthies, Jacob among them. They were planning, as it were, a big new push. This was after World War I and just before World War II.

Hugh was impressed with the man sitting at the head of the table. “He looked at me very, very seriously. There was no smile. It was a straight look, right in my face.” Hugh saw that he was making sure Hugh focused on him. The message came to Hugh’s mind from the man, “Get serious. This work is important.”

Hugh explained that, “One day, some time ago, it was raining when you came into my office.” Hugh told him he recognized immediately that “You were the man who was the one at the top of the table. And that I was taken into that dream to make sure that you joined the church.”

That was the beginning of an extensive series of Gospel conversations Kreso had with Hugh. Whenever Kreso came to Hugh with a question, Hugh dropped whatever he was doing. If he was in a meeting Hugh ended the meeting. If he was teaching a class – he dismissed the class to answer Kreso’s questions. Hugh knew Kreso had a great work to do and had known it since 1936. He just had to wait until the 1970’s to find out that serious man was Kreso. 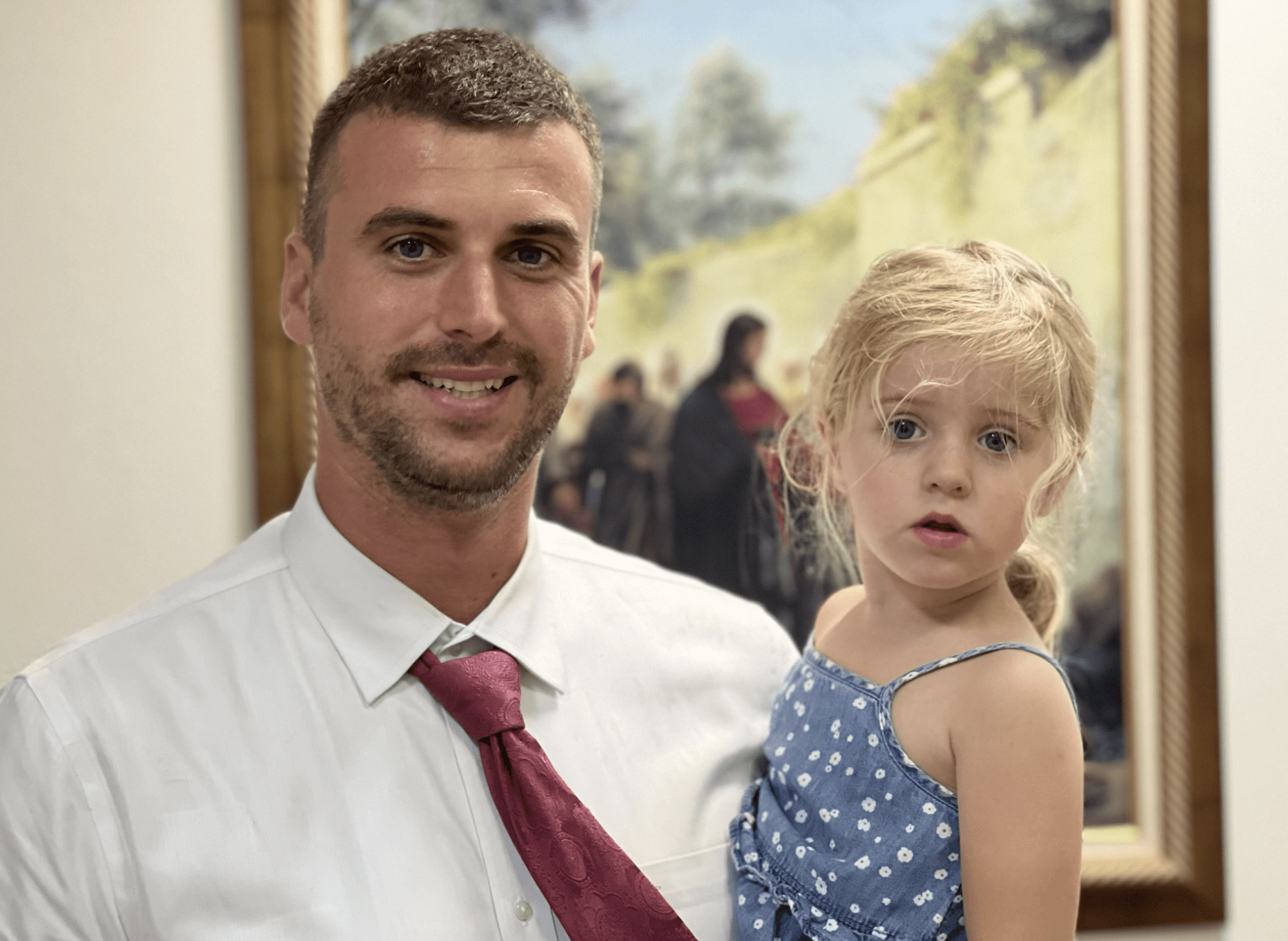 The Zadar Branch is relatively small but filled with some amazingly dedicated members. Nedjeljko Miso Ostarcevic and his wife Ankica Ostarcevic were the first couple that joined the church in the former Yugoslavia. They were the true Croatian pioneers. Miso was a teammate of Kresimir Cosic when they played on the club team of Zadar, winning 3 national championships, and a national cup together. Kresimir taught them about the church and baptized them. Church meetings were held in the home of Miso and Ankica for many years.

We had a chance to meet them while visiting the Zadar Branch with our group last Summer. They had been living for years in St. George, but, together, felt a strong prompting that it was time to sell all and move back to their hometown of Zadar with the express purpose of helping the Church in Zadar and Croatia grow. Ankica is a particularly outgoing and vibrant member missionary while Miso is a dedicated teacher of the Gospel. As Danijel pointed out, “They are of great help to us in our branch and in the district as well. They often drive to all the branches across the country to strengthen the local members. They really are our stars and we do really need their wisdom and faith here. It is a blessing to have them here with us.”

When asked about the size and activity of the Zadar Branch, President Kalega stated, “We average around 15 to 20 people at our Sunday meetings, but the numbers go up to 70 people during the Summer. You must understand that Croatia has a population of only 3.8 million people but this year 20 million tourists visited Croatia, which means that we have five times more visitors than people who live in the country! This is reflected in our attendance numbers as well.”

He added, “Many of our local members don’t forget to attend meetings even while on vacation. You really need to give them credit for that.”

I asked him if he had any thoughts to share with readers of Meridian Magazine and he quickly jumped at the chance to say, “One thing is for certain: our country’s people and it’s beauty are not hidden anymore.”

“Croatia was for many decades the best kept secret. Please come to Croatia if you wish to see the Mediterranean as it once was. It’s a small country for a great holiday. If you wish to walk the streets of towns that were established by Romans; if you wish to find peace; if you wish to admire the majestic coastland, the true artwork of the Lord’s creation in the land of thousands of islands – take the challenge and make sure you don’t miss out. And do come visit our Zadar Branch. You are surely welcome!”

President Kolega beamed as he told me those stories and proudly told of his beautiful country. He has the spirit of a Branch president. From spiritual leader to youth leader, to patron of the widows and disabled, to inspiration to the missionaries, Branch Presidents like President Kolega are the ultimate chief, cook and bottle washers of the Church of Jesus Christ in the many small branches of Christ’s church.

If you would like to see the podcast I had with President Kolega, just go to https://www.bucketlistcruisesandtours.com/croatia–dalmatian-islands.html and click on his photo-link.

Truly, President Kolega is a great servant of Christ just as so many Branch presidents are. They make a difference.

SPECIAL TRAVEL NOTE: In mid-September 2023, Elizabeth and I are returning to Croatia for another private yacht cruise and tour. You can come – we max out at 30 people – and you’ll have a chance to meet President Kolega and the Saints in Croatia. And you’ll see the country they’re so proud of. Go to www.BucketListCruisesandTours.com and see the details (tell us that Meridian sent you). We’re hoping Maurine and Scot Proctor will once again be with us for at least a portion of the tour but their schedule is tight. They gave an outstanding fireside to the Branch on Temples and we hope they can do so again.

Loved this peek into the church in Croatia! We were a part of this trip and felt it a privilege to meet these faithful saints. What an incredible example of dedication and faith. Highly recommend this trip! Cruising along the Croatian coast and exploring her islands brought many unanticipated delights! It was the adventure of a lifetime!