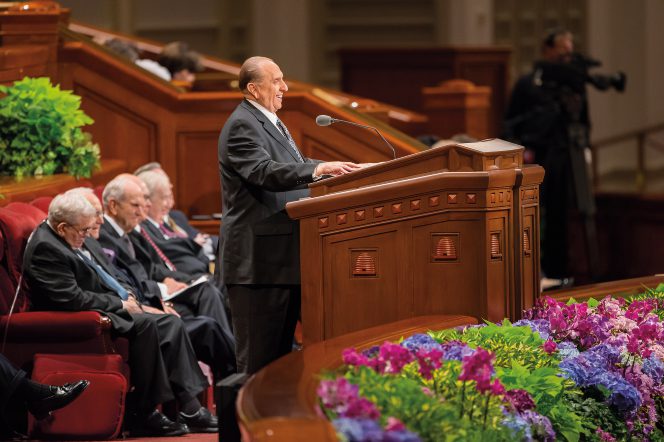 In 1986, the Peruvian economist Hernando de Soto Polar published his first book, The Other Path. The title of the book was a direct attack on the Shining Path, a ruthless communist insurgency in Peru. Because of their brutality and their failure to improve the lives of the people who lived under their control, the Shining Path never had widespread support among Peruvians. But de Soto understood that it’s not enough to recognize deviant paths. Sometimes a new path is needed.

And so, in The Other Path and in his work since, de Soto focuses his energy on carving out a new path. He analyzes differences in economic development across time and nations and showed how peaceful legal reforms and greater participation in well-regulated free markets was the real path to greater prosperity for the poor. De Soto’s economic theories have greatly influenced me (as you can see in this article I wrote with Walker Wright: No Poor Among Them), but his example of debating constructively made an even deeper impression. Although this story comes from a very extreme period of history, the lesson is universal: In times of confusion and conflict, the answer is not criticism alone. It is creation.

Many members of the Church are going through confusing and controversial times right now as the Church’s positions on social issues conflict with popular trends. The Church has taken and continues to take hits because of its staunch opposition to gay marriage. This opposition has been reiterated many times, including again at the most recent General Conference (here and here, for example). And yet at the same time, the Church has increased outreach efforts to gays inside and outside the Church. In late 2012 the website mormonsandgays.org was launched. Joshua Weed described his reaction as a gay Mormon this way:

This was the website —the statement created and published by the church — that I had been yearning to see all my life. It contained real footage of real stories of real people whose lives had been touched by the issue of homosexuality, but who also had experienced the joys of the Atonement. It spoke of love, of Christ-like acceptance. It admonished families to reach out to their loved ones, to be inclusive. It counseled ward members to love and above all be accepting.

A similar two-track story has played out in the Church’s interaction with feminist critics. On the one hand, the Church has taken a relatively hard line against Ordain Women. On the other hand, a woman prayed in General Conference for the first time in April 2013 and Elder Uchtdorf referred to the October 2014 General Women’s Meeting as part of the “worldwide general conference.” After some confusion, that position was officially confirmed by the First Presidency on October 30.

The twin social issues of gay marriage and feminism can be tied to yet another online controversy: revamped religion curriculum at BYU. A lot of the discussion centers on whether the new curriculum will de-emphasize the scriptures, but some of it focuses on the nature of new classes like one that will be taught on the family. This new class, which looks like this at BYU-I, will focus on “The Family: A Proclamation to the World.” One of the class’s six units will reinforce the Church’s commitment to gender essentialism. Another unit focuses on the duties of husbands and wives, which will likely emphasize the Church’s commitment to gender roles and affirm its opposition to same-sex marriage.

How does one make sense of all these facts?

The Bloggernaccle, which skews significantly to the left of ordinary American membership, has one narrative. According to this view, we are witnessing the messy and unsightly process of the Church being dragged—kicking and screaming—into modernity. Hardliner holdouts among the General Authorities either don’t understand or don’t care about the costs to the Church (both in terms of public perception and turmoil in the lives of members) of the widening gap between a progressive, tolerant world and their hopelessly outdated folk traditions. Such an interpretation holds out hope of change—rapid or gradual—to bring the Church into line with enlightened, tolerant, sensible modern views of gender and sexuality.

The template for this narrative is the history of the racial priesthood ban. The recent Race and the Priesthood article at LDS.org pointed out that the racial ban was never based on any specific revelation or canonized doctrine, and proponents of gay marriage and female ordination point out that there is not really a specific revelation or canonized doctrine on those topics either. The clearest document is the Proclamation, but that—they point out—isn’t canon. In doing so, they gloss over the fact that gender is a deeply intrinsic element of the human condition and a much more significant aspect of Mormon theology than race ever has been or ever could be.

This narrative is also essentially the result of importing the consensus view of the American left into a Mormon context: America started out with some great ideals but failed to live up to them. The Civil War ended slavery, the Civil Rights movement ended Jim Crow, and now the gay rights and women’s rights movements are carrying forward the march of progress and equality. The tactics and rhetoric of Ordain Women make a lot of sense in this context. The script they are reading from has the Church playing the role of the segregationist South.

As is often the case, the most important part of this narrative is not what it says explicitly, but what it assumes indirectly. First, there is an unspoken tendency to view the Church with the kind of embarrassment that one might reserve for a racist elderly relative. This is a much kinder and gentler way of ignoring the prophets than stoning them to death, but insofar as dismissing them as out-of-touch involves tuning them out, it amounts to much the same thing from the perspective of members.

Second, there is an unquestioned assumption that the only kind of progress possible is the kind of progress imagined by the left-wing of American politics, and that if you’re not on that specific train going down those specific tracks you must be stuck at the station going nowhere at all. Thus we often hear that we have to decide between either accepting the agenda of social progressivism or defending the status quo. We have to embrace these specific changes—things like gay marriage and female ordination to the Melchizedek Priesthood—or no changes at all.

It’s time for a new narrative. Here is one that I have in mind.

First, let’s establish that being conservative means something very different in a Mormon context than it does in other contexts because our tradition is one of change. From the pride cycle, to the rise and fall of dispensations, to the Restoration—still a work in progress—Mormonism embraces change at such a fundamental level that conservation of the past can never be the whole story. In a Church that expresses a commitment to future revelation in its Articles of Faith, the status quo is never a defensible long-term position. We’re always moving; the question is which path we take.

Second, let us concede that our leaders are not perfect and their statements are not infallible. Let’s not allow that concession to erode entirely our faith in the mantles these men and women wear, however. Bishops and relief society presidents, General Authorities and the General Relief Society Presidency and Board should be given a degree of deference over and above whatever they may claim by virtue of their own wisdom or training purely because of the offices they hold. If we do not do our part to heed our imperfect leaders, than we render ourselves incapable of being led by the Lord as a community, no matter how sincerely we may attempt to seek Him out as individuals.

Taken together, these principles can shed new light on the events I outlined above. Where we might be tempted to see contradictions, and therefore symptoms of a Church caught between being mired in the past and dragged towards a morally unassailable future, we could instead see synthesis. Maybe the leaders mean what they say in their staunch defense of the traditional definition of marriage combined with the imperative to treat all of our brothers and sisters with respect and Christ-like love.

Maybe instead of half-measures and compromises between patriarchy and one particular conception of feminism, the Church’s evolution on the role of women laying down a new set of tracks; one that embraces essential differences between men and women and finds greater nobility in incommensurate complementarity than simplistic equality.

Joseph Smith modeled a new path and defied categorization. We need to live up to that legacy and refuse to allow our discipleship to fall into either of two ruts: facile progressivism or frightened conservatism. Mormonism defied the hyper-patriarchal 1840s with the doctrine of a Heavenly Mother and co-exaltation of men and women. Against the current of today’s hyper-individualism, the Church’s re-commitment to chastity, the sanctity of life and the primacy of family fill the same role. The Lord has always used His prophets to show a new way forward. Let’s try to live up to that.

This is a thoughtful article, which I enjoyed reading. I just wanted to add one comment about he nature of change in the LDS church. It seems to me that there is a history of tension between LDS leadership and progressive members that is often at the root of change in the church. Compromise positions are often forged through the dynamics of this tension. For example, the Church's acceptance of broader civil rights for African-Americans was initially sparked by some very intense exchanges between progressive members and Church leaders, followed by many letters from African saints desiring access to the ordinance of baptism. The interaction eventually led to Declaration 2. So, there is a role for members of the Church to petition their leaders for further revelation. I think this is an important role, and wish it were more openly accepted in LDS hierarchy. Unfortunately, this dynamic is more often confrontational than cooperative. Members are not normally given access to general church leaders, and must therefore rely on confrontational tactics to gain attention. I think Church culture could benefit immensely of there were an open, honest forum where normal members could petition Church leaders directly. Of course change is always difficult and messy, so perhaps confrontation is unavoidable.

This was exactly what I needed to read today. Very eloquently put.