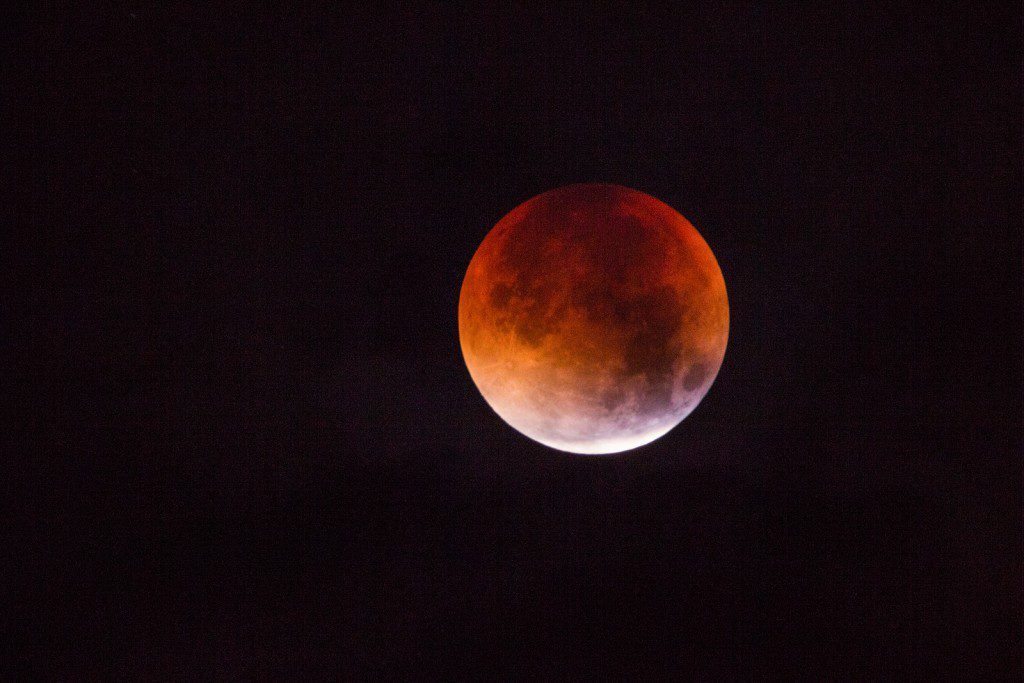 Calendar and celestial alignments often accompany “above and beyond” miracles that are considered to be major signs and wonders that fulfill prophesy. Examples include the three hours of darkness over all the earth and the lunar eclipse at the Lord’s Crucifixion plus the night without darkness at His birth. Both His birth and death were aligned with the Passover holy day on the Hebrew calendar as well as holy days on many other sacred calendars.[i]

We had a great view of the fourth “blood moon” total lunar eclipse on September 27, 2015 on the evening that started the holy day of the feast of Tabernacles. It is amazing to see the dim red moon and realize that this is a full moon that in a short time will revert to again being almost too bright to look at comfortably in good binoculars.

Even though this eclipse is a rare alignment, it is still a predictable celestial event. History has shown that truly great events in religious history couple these predictable calendar and celestial alignments with other events that scientifically we cannot explain.[ii]

Picture of one step in the partial phase of the 27 Sep 2015 lunar eclipse taken by Logan Millett in Mesa, Arizona.

Gold Standard of Interpretation of Signs and Wonders

One way to avoid deception or Chicken Little “end of the world” “the sky is falling” traps is to pay particular attention to the living prophets and how they give prophetic interpretation of true signs and wonders.[iii]

In the Book of Mormon, Samuel the Lamanite prophesied of the signs of the Lord’s birth and his death including the night without darkness at His birth and the calamitous three hour world-wide storm at His death. (Helaman 14:4,10)

The prophet Nephi, grandson of Helaman (II), then chronicled the fulfillment of these prophesies. (3 Nephi 1:15, 8:19)

One true prophet gives us the prophesy and another true prophet interprets its fulfillment. An ideal deception-proof formula!

The Apostle Peter’s Explanation on the day of Pentecost

Another great example is when the chief apostle Peter explained on the holy day of Pentecost how several parts of the prophesies of the prophet Joel were being and had been fulfilled.

A representation of “the Descent of the Holy Spirit on the Apostles.”[iv]

“This is that which was spoken by the prophet Joel; And it shall come to pass in the last days, saith God, I will pour out of my Spirit upon all flesh: and your sons and your daughters shall prophecy, and your young men shall see visions, and your old men shall dream dreams:” (Acts 2:17 quoting Joel 2:28)

The pouring out of the Holy Ghost was one phase of fulfillment of Joel’s prophesy that was happening right as Peter was speaking and the multitude heard him speak in their native languages. Peter then quoted Joel’s further prophesy that had just had one fulfillment seven weeks earlier on the day of the Lord’s Crucifixion and evidently would have other fulfillments in the future.

“And I will shew wonders in heaven above, and signs in the earth beneath; blood, and fire, and vapour of smoke: The sun shall be turned into darkness, and the moon into blood, before that great and notable day of the Lord come:” (Acts 2:19)

As well as being aligned with the holy day of Passover, the Crucifixion day included a partial lunar eclipse at sunset after Jesus was put in the garden tomb. The blood-red moon was clearly visible in Jerusalem.[v]

“Darkness over the Whole Earth”

The darkness that covered the land from 12:00 until 3:00 p.m. at the crucifixion was not just a local storm.

The Greek historian Phlegon described what happened during the Roman years from July 32 AD to June 33 AD.

“There was ‘the greatest eclipse of the sun” and that ‘it became night in the sixth hour of the day [i.e., noon] so that the stars even appeared in the heavens. There was a great earthquake.”[vi]

Just as the night without darkness at Jesus’ birth, we have no scientific explanation for these three hours of storms and darkness stretching across the earth. With both of these “above and beyond” signs plus many celestial and calendar alignments, the weekend of the Atonement and Resurrection must indeed qualify as the most impressive and statistically improbable few days of all time.

As impressive as the tetrad of blood moons are and as likely that these rare events may have some prophetic fulfillment, a truly significant last days sign will likely also be accompanied by additional superlative signs such as the night without darkness or the storm and darkness covering the whole earth in the meridian of time.

This year the yearly Easter calendar alignment is very similar to the Resurrection weekend, including a full lunar eclipse this year and with other calendar holy day alignments. Shouldn’t this event be considered as an additional powerful testimony of the Atonement and Resurrection of Jesus Christ, one of many last days signs that will come to pass during the years, decades or scores of years yet to come before the Redeemer’s Second Coming?[vii]

Perhaps we should pay attention to the Primary children singing with such emotion and faith pointing out the true approach as we seek to understand the signs of His coming:

First picture of this article showing the eclipse 27 Sep 2015 above Washington Monument.

“The scriptures assert that important historical events are synchronized with “holy days” on the Hebrew calendar. Ancient Americans used a calendar based on the planet Venus that they claimed was created before the foundation of the world to chronicle key earthly events. Dr. John P. Pratt’s latest article, “Twelve Steps from Christ to Adam,” briefly shows how these two calendars working together can be used to discover important historical dates and to testify of the truth of the Biblical chronology and the life and Gospel of the Lord Jesus Christ.”

If one really wants to consider important historical dates accompanied by calendar alignments and other signs, I would hope that the reader would go through the 12 steps from Christ to Adam and consider the derivation of some of these dates contained in this document that summarizes John Pratt’s lifetime of research into ancient calendars.. Note that not only do we see signs associated with these dates that we have no scientific explanation of like major signs of the exodus and Christ’s birth and death, but important events in prophets’ lives such as births, ordinations and deaths are an important group of these dates.

“Other prophecies of doom are in full flower on the Internet as well just now. Jonathan Cahn has promoted in his book The Harbinger that 13 September 2015 was to be a day of financial crisis and stock market upheaval. The fourth Blood Moon, which fell on the first day of the Feast of Tabernacles, Sept. 27, was also considered a sign of disaster. This has caused enough worry among some that the LDS Church issued an official statement:”

“On April 15, 2014, a total lunar eclipse will occur on the same day as the Jewish Passover on the Hebrew Calendar. Three other lunar eclipses will also closely align during the next two years with the Passover and Tabernacles sacred feast days. Various publications such as Minister John Hagee’s book (“Four Blood Moons: Something is about to Change”) have trumpeted this rare set of four events as a significant sign of the fulfillment of latter-day prophesy. This article will analyze these coming events double checking the claimed alignments and examining the visibility of the eclipses in Jerusalem.”

RPMNote: An example of a date that I thought would surely have a visible additional spectacular and miraculous event attached was Monday 6 April 2009. This anniversary date of the crossing the River Jordan to begin the conquest of the land of Canaan in 1422 BC also was an anniversary date of Isaac’s birth as well as the date of Christ’s birth. The Jubilee year was in the middle of the financial collapse that had been in progress for several years. I really thought that something more might be in the works, but the weekend came and went without any kind of spectacular sign or wonder. This emphasized for me that many times great calendar alignment dates may simply be another witness of the original event, such as Isaac’s birthday or the crossing of the River Jordan and have no further sign or wonder attached. Or, it might be another manifestation that some of the most significant dates mark the birth into mortality of one of the Lord’s valiant servants. It might be many years later that we could indeed find that 6 April 2009 may have been an important birthday for another prophet like Isaac.

Please read one of John Pratt’s most interesting articles entitled “Joshua’s Seventieth Jubilee” that discusses the significance of this date in religious history.

“Soon we can celebrate seventy jubilees since Joshua crossed the River Jordan.”

“There were many key events in the history of Israel which occurred during the final year in the wilderness and then shortly after crossing the Jordan. Let’s consider several of them so that we might remember each during the coming jubilee year.”

“As stated repeatedly in my past articles, I have no idea if anything special might happen on that date. It is only being reported here so that in case something of religious significance does occur, it will be a witness that God had planned it millennia ahead of time. In fact, the birth of Isaac was also unique in scripture in that God actually prophesied to Abraham the exact day on which Isaac would be born, being exactly one year from that holy day (“set time” in Gen. 17:21). Thus, the birth of Isaac seems to have been on a special day indeed.”

RPMNote: Note that John Pratt does not imply that any modern event need be involved. For him, just remembering these wonderful and miraculous historical events would be certainly enough of a sign and a wonder even if nothing in current events is actually connected with the alignment packed dates discussed in this article. Given this description of modern significant calendar dates that may just be powerful testimonies and witnesses of the original event, it becomes even more difficult for us to judge fulfillment of prophesies without prophetic guidance from a Nephi or a Peter and the perspective that the event’s historical context may provide us years into the future.

There is an obvious scientific explanation for the catastrophes/darkness/greatest eclipse, which is a larger body than the moon passing the Earth. www.MormonProphecy.org