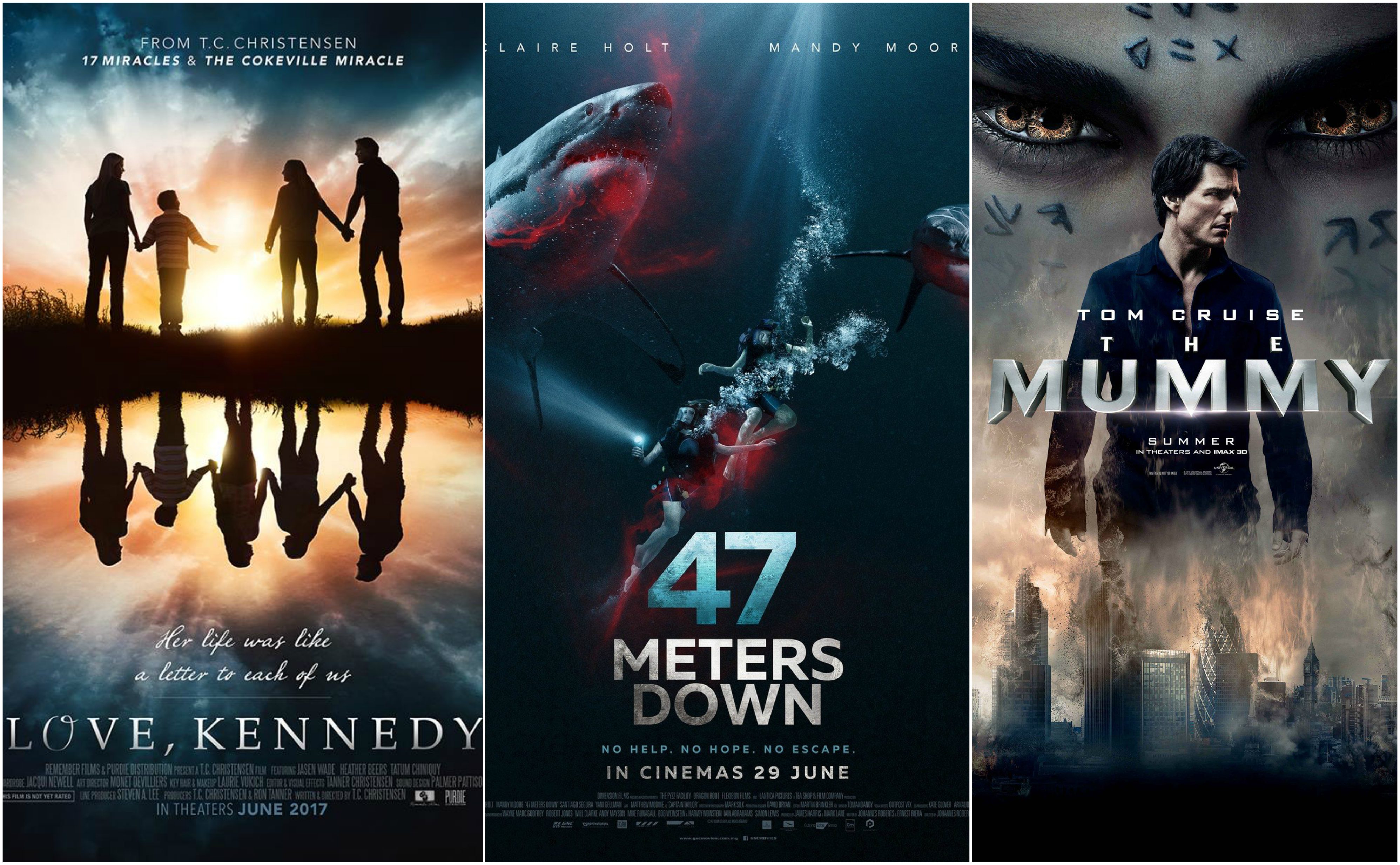 I’m getting caught up on my summer movie reviews for you fine people. Coming next week I’ll weigh in on Spider-Man: Homecoming and Despicable Me 3. For now, let’s take a look at three flicks now in theaters.

Authors note: I review for artistry, content, and moral messages. The letter grade is for entertainment value, not content. I share Gospel parallels for those who wish to use cinema to launch a discussion.

A terminally-ill teen inspires a community with her love and faith in this new film by T.C. Christensen (17 Miracles, Ephraim’s Rescue, The Cokeville Miracle). Based on a true story.

To see a T.C. Christensen film in a crowded theater is to experience surround-sound sniffling. This powerhouse tear-jerker is sure to inspire you to be a better person. Basing his film on the biography Kennedy’s Hugs, the director filmed on-location at the family’s home and the high school where the events actually took place. With the family helping to guide the script and members of the community playing themselves in supporting roles, there’s feel of authenticity that Hollywoodized “true stories” can’t touch.

Jasen Wade (The Cokeville Miracle) conjures up powerful, raw tenderness as a father who adores his little girl. Heather Beers (Charly) effectively captures the heartbreak and hope of a mother witnessing her child struggle and inspire. Tatum Chiniquy studied video of the real Kennedy and worked with the family to craft a performance that is more than imitation: it’s a recreation that does justice to a real person. The film displays a simple visual beauty that doesn’t draw attention to itself yet serves the story. A few supporting parts aren’t amazingly-acted and a few jokes don’t land, but most of the humor and emotion register strongly. Christensen is to be commended for telling the story as it happened instead of creating melodramatic conflict or watering down the religious elements so vital to Kennedy and her loved ones. Don’t miss it. (Opens in Arizona, Nevada, and Idaho July 14th).

Love, Kennedy is rated PG for thematic content involving terminal illness, including images of a deathly sick teen and moments of screaming and seizures. It has no offensive content. If you go, I recommend leaving younger children at home as this is a serious drama.

Life is short; do as much good, share as much love, and help as many people as you can (see Alma 34:32). Love and honor your parents (see Exodus 20:12). Kindness and compassion can help individuals and families to endure anything (See 2 Peter 1:5-8). Your actions can inspire positive change in others (see 1 Timothy 4:12). Through the Atonement of Christ all will be resurrected (see 1 Corinthians 15:22) and families can be together forever.

Thriller finds two sisters running out of oxygen and surrounded by man-eaters when their shark cage sinks to the bottom of the ocean.

If you can embrace that this film has more in common with fictional monster movies than actual shark behavior (or scuba diving, for that matter), it’s a real nail-biter. The premise is simple. The characters are paper-thin. Some of the dialogue is unintentionally laughable. The shark effects don’t quite pass muster when the characters are near the surface (they are excellent, however, in the dark depths). Yet, for popcorn B-movie entertainment, 47 Meters Down satisfies with terrifying execution. The suspense is nearly-unbearable at times, and stars Mandy Moore and Claire Holt do a fine job of eliciting audience sympathy. Director Johannes Roberts masterfully preys on audience fears of drowning and being devoured. The use of space and silence is brilliant. It’s no Jaws, but those desiring a shark-thriller fix will find what they need here.

47 Meters Down is rated PG-13. It has one harsh profanity, a few moderate profanities, and misuses of God’s name scattered throughout. Young women drink beer and kiss men they’ve just met. A woman is briefly seen in a bikini and men are shirtless as they swim. Several people are attacked by sharks; there is some blood and a few rapid gory glimpses of bitten legs, blood in the water, etc. but mostly the film focuses on generating thrills through near-misses and increasing tension over the fear of drowning and attack. Some people die. If you go, go with teens and up.

In times of trial, loved ones can help keep hope alive (see Doctrine and Covenants 81:5). Stay calm in crises so that you can think more clearly. “So many times young people are enticed to go to the very edge or even beyond it. With only a precarious toehold, it is easy to be seriously injured or even die. Life is too precious to throw away in the name of excitement” (President James E. Faust, “Acting for Ourselves and Not Being Acted Upon,” October 1995 General Conference). Jonathan’s note: I’m not against shark-diving, but it needs to be done safely unlike in this film.

A soldier-of-fortune unearths a cursed mummy, unleashing evil and drawing the attention of an agency that fights monsters. Pre-order on Bluray/DVD here or Instant Video here.

Expectation is everything. By the time I saw The Mummy it was sitting ugly at 15% on Rotten Tomatoes. I expected a train wreck, and while the film is a mess, it’s an entertaining mess. To be transparent about my biases, I’m a fan of Tom Cruise, female characters in strong roles, and Universal Studios monsters, so I was probably destined to enjoy this one. Cruise is reliably dedicated (even if his character is underwritten), Sofia Boutella is equal parts glamorous and grotesque in the title role (it works somehow), and the creature effects are genuinely thrilling.

Despite its modern trappings, the film has the visual sensibilities of a classic horror film. The stunts and action are exciting. There’s a surprisingly solid moral message at the end. The humor is about 50% successful. Russell Crowe shows promise in his role, even though his presence smells of world-building and one too many “cooks in the kitchen.” The plot is convoluted, the dialogue leans towards the melodramatic, and the love interest is too “damsel-in-distress” for a modern film. Still, for those with certain tastes there’s much to enjoy here, at least enough to look forward to the next film in Universal’s “Dark Universe.”

The Mummy is a strong PG-13 with more horror elements than the trailer suggests. It is not for children. An evil Egyptian princess kills a baby offscreen and stabs a man and woman in bed (we don’t see the stabbing, but there is blood splatter). She strips nude to make a pact with the god Anubis (who is later described to be the same being as Satan in Judeo-Christian beliefs), her breasts and buttocks barely obscured. We briefly see her obscured rear end. A man wakes up naked in a body bag; we see him from the front, standing with his hands over his privates. A man has visions of the mummy in her beautiful human form, kissing him and speaking with him in bed (no sex or nudity). There’s some innuendo about a one-night-stand. There are a handful of moderate profanities. There is plentiful horror/action violence, with monster attacks and fighting. Persons are dried up by the mummy’s kiss as she sucks away their life force and turns them into mummies. Persons are covered by rats, spiders, and insects. If you go, go with teens and up.

Evil can only be overcome when people use their free will to choose good (see Helaman 14:31).

Oddly, you can have the “true-story inspiring teenage girl” aspect of Love, Kennedy with the shark attack action of 47 Meters Down (because, really, who wouldn’t want such a mash-up?) in Soul Surfer, which you can rent or buy here.

If you’re into Universal monsters but want something a bit more quality (and less intense) than The Mummy, check out the classic Bride of Frankenstein, which ranks a whopping 100% at Rotten Tomatoes! Rent or buy it here.

For more of Jonathan’s movie reviews, along with his relationship tips as a licensed marriage and family therapist, please visit www.yourfamilyexpert.com. For can’t-miss movies that adhere to Mormon standards, check out his book 250 Great Movies for Latter-day Families. You can see Jonathan at this year’s BYU’s Education Week, where he’ll be presenting on “Stepfamilies and Adoption in the Gospel” August 22-25