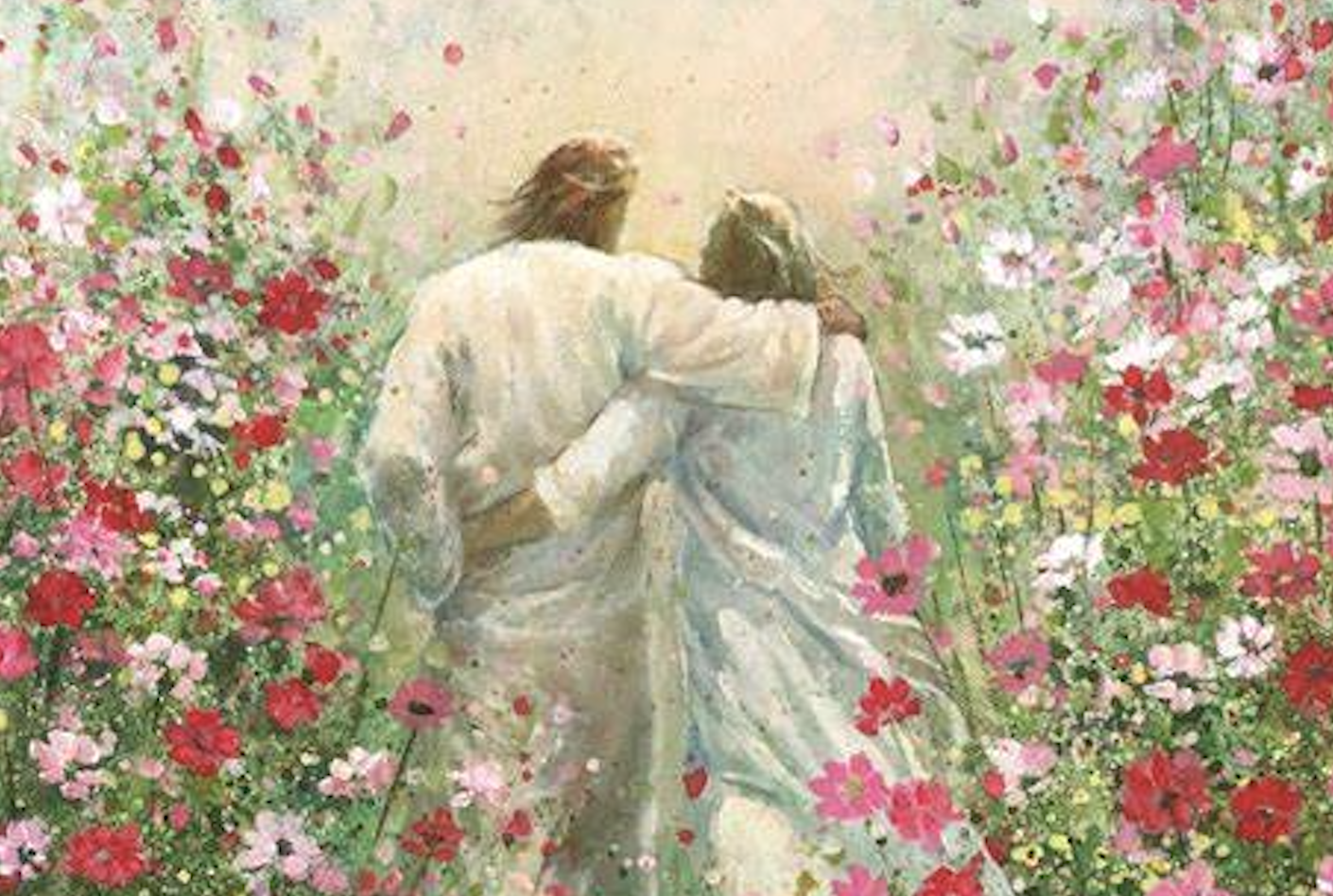 The feelings we have when we fall in love are some of the most tender we will experience, but they become especially poignant when we are given a sure knowledge that this person is a “soul mate” pre-arranged from pre-mortality to be our future spouse.  I want to share 5 such stories from readers such as you…

(I recently wrote about pre-mortal promises, https://latterdaysaintmag.com/premortal-promises/  but this article will focus on undeniable knowledge some have received on who they should marry).

“I just saw my husband and I don’t even know who he is!”

William Toft was a convert to the Church in 1972.  At that time his future wife was on a mission in California.  He wrote,

“On the day I was baptized she [my future wife] had an unusual feeling and wondered what it meant. She called home and found out everyone was fine.  Nevertheless, the feeling persisted and she noted it in her journal…

“Fast-forward to June 1974.  She returned from her mission to northern Texas to live near her married sister and attend nursing school.  One day while attending stake conference with her sister’s family, sitting way in the back in the cultural hall she saw me. She immediately “recognized” me.  She just knew that I was to be her husband.  She couldn’t find out who I was after the conference ended, and was very frustrated.  I left not knowing any of this.

“When her sister came out to her car after conference was over she found [my future wife] sitting in the car crying.  “What’s the matter,” she asked.  Answer:  “I just saw my husband and I don’t even know who he is!”

“Time passed.  She eventually was assigned to a Singles Family Home Evening group; it’s the group I was a part of.  The first time she attended, the group met at my home!  It had been almost 5 months since she first saw me.  We finally met!…

“As we got to know one another, she asked me when I was baptized.  When I told her she checked her journal and found out it was the day she had those unexplainable feelings while on her mission.

Special and often unexplainable feelings and events are part of the discovery of soul mates.

David Gross shared an interesting tale of the magnetism he felt when he first met his pre-mortal love, He wrote,

“It was 1975 when I was 16, a non-member and not interested in any religion when I met Sally who was a member. I immediately felt something that I can only describe as a magical experience or attraction. For me, it was like the ending of the play “Saturday’s Warrior.” I wanted to be with her like two magnets. Through her influence I gained a testimony and she agreed to marry me at age 19. We have seven children, are happily married and looking forward to an eternity together.” [ii]

This unique magnetism is not always noticed by both parties initially, but eventually the forever feelings are manifest…

“I joined the Church in 1962 at 16. My parents were smart, responsible people, but my mother had NPD and our family was dysfunctional and full of contention. At 15, I had felt a deep emptiness and wondered if religion might fill the void. I began to attend the various churches of my friends and enjoyed them all, but the void was never filled, until I was invited to a youth conference of The Church of Jesus Christ of Latter-day Saints. —The second I crossed the threshold of the church building, a feeling washed over me that I was in the right place—forever!

“As the time approached to go off to college, my parents wouldn’t allow me to go to BYU, because they didn’t want me to meet and marry a ‘Mormon.’ I went to another university and went up days before school started for freshman orientation. It only took a couple of days there for me to realize I was in “sin city” and that it was going to be a tough year.

“Just before classes started there was a welcome dance. I was asked on a date. I asked my date if he knew any Mormons—I was desperate to find some.  He answered that he did; he had roomed with an LDS guy who was really a ‘straight-arrow.’ In fact, he was there at the dance and he would introduce me.

“As we walked across the floor, I suddenly KNEW I was about to meet my future husband…

He left on a mission not liking me at all, but guided by my feelings I found a way to transfer to BYU, and when he got back, he was instantly smitten and things moved very fast. We’ve been married 54 years. In priesthood blessings we were told that he loved me in the pre-existence. So this wasn’t love at first sight, but love even before first sight [iii]

As Gayle discovered, priesthood blessings and dreams can sometimes help in understanding these past relationships…

“Forty three years ago, when my stake president set me apart as a missionary, he blessed me to know that I would work with, and take the gospel to individuals that I knew in the pre-existence.  It stuck with me.  I met several of them on my mission.  One became my companion.

After my mission I stayed closely in touch with that mission companion. He liked racing motocross and had a race in Delta on a Saturday. I decided to take a first date to watch him race. I told my date of our friendship and background, but not of the pre-existence connection yet.

“That following Monday this same girl and I went on a run together and the topic came up about my former missionary companion. I then told her the rest of the story. She looked like something hit her hard and said, “I need to show you something.” She went home, and then met me at my house…

(“While on my mission I had 2 vivid identical dreams. I dreamt that I was sitting on my bed and my girlfriend (whoever that would be at the time) showed me her patriarchal blessing and that it said that she and her husband (to be) promised each other that they would find each other on earth and be sealed. )

“When my new girlfriend (of 9 days) arrived at my home, she had me read a few of the following paragraphs from her blessing which confirmed the dream I had:

‘I further give you instructions of that principle in which you are to find your eternal companion. I promise you that you did converse with him in the spirit world. You did covenant with him that you would come and find one another here upon this earth, establish a home bring forth children…through the Holy Ghost you will know of a surety when this individual comes into your life…he will have served a mission…’

“After reading it the tears flowed. She already knew and was waiting for my reaction.  I then said, “I guess I don’t need to ask you to marry me!” She sweetly shook her head, and we were engaged.

“We were married 3 months later. I’ve had a lot of spiritual experiences in my life but none have been stronger than that one in March of 1982.” [iv]

I also want to share an account of a marriage that was planned in pre-mortality as an act of true love, but that didn’t pan out in the usual way…

A Mission to Marry in Pre-mortality

“I live in UT, but spent 21 years living further east.  During that time, we moved my son and his young family from Utah to back east which we hoped would give him a better chance of attending nursing school. He and his wife were not doing well together and one day he sat with me in the family room weeping about the difficulties he was going through, and the marital breakup that was coming.

“The mama bear in me began to well up, but the Lord stepped in and enlightened me with the knowledge that our son had, in pre-mortality, accepted a mission to marry this particular young lady because he was her best hope to work out her salvation. He had agreed and was working hard to help her.

“We have learned a lot from our former daughter in law. Her choices have been very destructive, but there is always hope. I can finally say that I wish her well and honestly pray that she will turn her life around at some point. We are all in this together and all trying the best we can in any given situation” [v]

As heartbreaking as that story was, it shows that some divine marriage agreements were made pre-mortally, even if they are difficult or even disastrous in this realm.   But the underlying pre-mortal motivation was always love.

New dimensions are opened when the veil parts and we recognize those who we will be intimately associated with in this life.  These experiences give some of us undeniable knowledge of who we should marry.  It is a love that will echo forever. One day we’ll all see how our pre-mortal loving comes to fruition in this realm and transcends into the next.