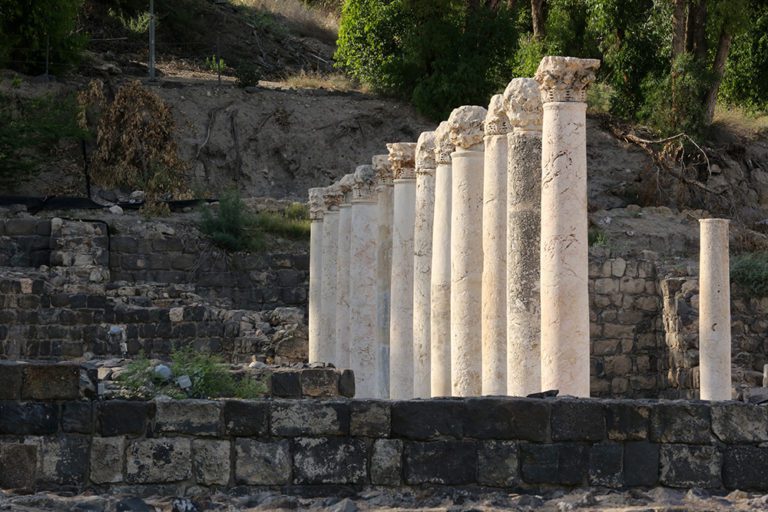 I am the law and the light. Look unto me, and endure to the end, and ye shall live; for unto him that endureth to the end will I give eternal life… This is the law and the prophets, for they truly testified of me. [1]

Every week we have the sacred privilege of coming unto Christ at the sacrament table. We are commanded to “go to the house of prayer and offer up [our] sacraments upon my holy day” [2] At that moment we come into the presence of the Lord and account for ourselves, repenting of our sins and taking upon ourselves a covenant to keep His commandments so that we may have His spirit to be with us. If we do these things properly, we are purified; and if we persist in keeping the commandments, we need never be without His presence.

Imagine being denied access to the sacrament table. Imagine losing the privilege of coming unto Christ to be purified of Him.

“Build unto the Lord a House”

That was the situation of the Jews for 70 years after the Babylonian destruction of the temple in 586 B.C. The house of the Lord lay in ruins. The sacred ordinances of the Aaronic priesthood, which gave access to the blessings of the Atonement, could not be performed.

Because of Israel’s persistent sinfulness and unwillingness to repent, the Lord allowed the temple to be destroyed rather than see it desecrated.  It was only when the blessings of the temple were no longer available to them that the house of Israel began to realize what they had lost. “By the rivers of Babylon, there we sat down, yea, we wept, when we remembered Zion.” [3]

So imagine their delight when a new king over Babylon, Cyrus the Great, was moved upon by the Lord to allow the Jews to return to Jerusalem.  By this time, most of them had no memory of the holy city. Still, they yearned for the lost privilege of coming into the presence of the Lord and receiving their purification.

As the Prophet Joseph Smith taught:

What was the object of gathering the Jews, or the people of God in any age of the world? … The main object was to build unto the Lord a house whereby He could reveal unto His people the ordinances of His house and the glories of His kingdom, and teach the people the way of salvation. [4]

Avid to regain access to the ordinances, the Jews began to gather once again. Eventually, some 50,000 of them trekked westward from Babylon, across what is now Iraq and Jordan, over a four-month period and arrived at the mountains of Judea to reconstruct the holy city. (There is an interesting parallel here between the Mormon trek west, which also took approximately four months in 1847, and the return of the exiled Jews to Jerusalem.)

All of Them Were Pure

“Then rose up the chief of the fathers of Judah and Benjamin, and the priests, and the Levites, with all them whose spirit God had raised, to go up to build the house of the Lord which is in Jerusalem.” [5] Within a year they re-laid the foundations of the ruined temple, but two decades passed before the temple was completed.

For many years they were forbidden to work on the temple because their neighbors misrepresented their intentions to the imperial government of Persia. At length, however, King Darius I permitted the building to proceed.

The Aaronic priesthood was set in order, the sacraments offered, and the people once again purified by righteous observance of the Passover. Once again, after decades of apostasy and exile, the Jews were gathered, as Joseph said, “to build unto the Lord a house whereby He could reveal unto His people the ordinances of His house and the glories of His kingdom, and teach the people the way of salvation.”

Nehemiah Rises Up to Build

Much work remained. The holy city was vulnerable to attack because the city walls were in ruins. The Lord inspired a high royal official, the Israelite Nehemiah, to ask of the king leave to move to Jerusalem to restore to the city its defenses. Nehemiah found the people discouraged.

Then I told them of the hand of my God which was good upon me; as also the king’s words that he had spoken unto me. And they said, Let us rise up and build. And they strengthened their hands for this good work. [7]

The neighbors of the renewed gathering of Israel were hostile. Apparently, their interests were threatened and they schemed to prevent Nehemiah from raising the city walls.

Elder Boyd K. Packer explains the significance of this story:

The prophet Nehemiah rallied the people to rebuild the wall about the city. Their enemies were amused. Sanballat mocked them and said, “Will they revive stones out of the heaps of rubbish?” Tobiah the Ammonite said, “Even that which they build, if a fox go up, he shall even break down their stone wall.” (Neh. 4:2–3.)

When the enemies saw that the wall was nearly up and that it was strong, they became worried. Sanballat and Geshem invited Nehemiah to meet with them… But Nehemiah said, “They thought to do me mischief. And I sent messengers unto them, saying, I am doing a great work, so that I cannot come down: why should the work cease, whilst I leave it, and come down to you?” (Neh. 6:2–3.)

Their defense was simple and effective: “We made our prayer unto our God, and set a watch against them” and then went about the work.

And that is what we should do — go about our work, strengthen the wards and the stakes, the quorums and the families and the individual members. We have a work to do. Why should it cease while we do battle with our enemies? Brethren, set a watch and make a prayer and go about the work of the Lord. [8]

Building up Zion and her defenses would not be easy for the newly gathered Israelites. Their enemy Sanballat and his minions resolved to stop the building by force. When Nehemiah heard of this, he redoubled their defenses:

We returned all of us to the wall, every one unto his work.  And it came to pass from that time forth, that the half of my servants wrought in the work, and the other half of them held both the spears, the shields, and the bows, and the habergeons; and the rulers were behind all the house of Judah. They which builded on the wall, and they that bare burdens, with those that laded, every one with one of his hands wrought in the work, and with the other hand held a weapon.  For the builders, every one had his sword girded by his side, and so builded. [9]

In every age when the people of God set out to build up Zion, the enemies of God do their best to stop it. The circumstances in Jerusalem of Nehemiah’s time were almost duplicated when the Saints at Kirtland were trying to build the temple there.  The mob was so determined to stop the building that the Saints had to arm themselves even while carrying on the work.

Joseph [Smith labored] in the stone quarry, quarrying rock with his own hands, and the few then in the Church, follow[ed] his example of obedience, and diligence, wherever most needed; with laborers on the walls, holding the sword in one hand to protect themselves from the mob, while they placed the stone and moved the trowel with the other. [10]

Ezra Teaches the People the Way of Salvation

Once the city was secured, the people called a solemn assembly under Nehemiah’s direction. They invited the prophet Ezra to teach and expound to them the Law of Moses.

Ezra, known as “the Scribe,” is an extremely significant figure in the story of Israel. An Aaronic priest, he was among the returned exiles determined to rebuild Zion. In later generations, he has come to be highly regarded among the Jews as the one who restored the lawful pattern of worship to the Jewish people.  According to the Jewish Encyclopedia, “Ezra was worthy of being the vehicle of the Law, had it not been already given through Moses. It was forgotten, but Ezra restored it.”[11]

A great deal of Jewish literature is associated with Ezra. There are three apocryphal books of Ezra and a well-known Apocalypse of Ezra. According to tradition, Ezra received a vision of the Savior rewarding the righteous Saints in heaven:

I, Ezra, saw on Mount Zion a great multitude, which I could not number, and they all were praising the Lord with songs. In their midst was a young man of great stature, taller than any of the others, and on the head of each of them he placed a crown, but he was more exalted than they… Then I asked an angel, ”Who are these, my lord?” He answered… “These are they who have put off mortal clothing and put on the immortal, and they have confessed the name of God; now they are being crowned” … Then I said to the angel, “Who is that young man who places crowns on them?” He answered and said to me, “He is the Son of God, whom they confessed in the world.” [12]

Ezra became the spiritual leader of the returned exiles as they sought to restore the ancient faith of Israel. In this capacity, he was invited by Nehemiah to teach all the people.

Surrounded by the elders, Ezra stood “upon a pulpit of wood, which they had made for the purpose,” and read from the Law “from morning until midday.” The makeshift platform was probably positioned just below the southern wall of the temple so that Ezra could see the people in an open area that sloped down toward the “water gate,” located at the extreme south end of the city (“all the people gathered themselves together as one man into the street that was before the water gate”).[13]

As they read, they discovered that they should at that particular time of the year observe the Feast of the Tabernacles, when all Israel was required to live in temporary booths, or “tabernacles,” to memorialize the time when the children of Israel dwelt in tents at the foot of Sinai and heard Moses expound the revealed law of God. [15]

So on the second day of the assembly, “they went forth… and made themselves booths, every one upon the roof of his house, and in their courts, and in the courts of the house of God, and in the street of the water gate.” [16]   The teaching continued through the week-long festival, “and there was very great gladness.”

This revealed pattern of teaching continues. As in the time of Ezra, the Saints meet in the Conference Center and Tabernacle in the shadow of the Temple to hear prophets “teach the people the way of salvation.”

The episode of the restoration of the temple in Jerusalem foreshadows our time of restoration. The house of Israel is gathering again, as was done anciently.  The ordinances of the Lord’s house are once again available, as anciently. And once again, as in the time of Ezra and Nehemiah, Israel is blessed with the inspiration and direction of living prophets.  We can, like those ancient Saints, come to the house of prayer and offer up our sacraments as they did. We can be purified through the Atonement of Christ as they were. We should, like those who built up Zion anciently, have “a mind to work” and build up Zion in our day.