Lesson 13: "This Generation Shall Have My Word Through You" | Meridian Magazine 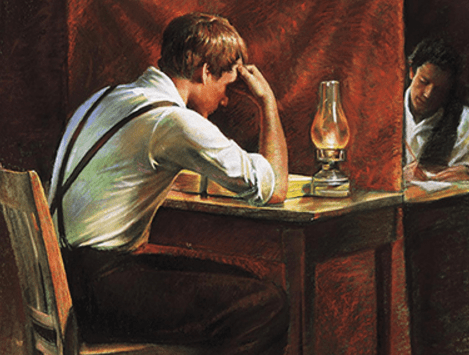 Lesson 13: “This Generation Shall Have My Word Through You”

The Doctrine and Covenants is an invitation to all people everywhere to come unto Christ. In the revelations of this book “one hears the tender but firm voice of the Lord Jesus Christ” inviting all to come unto Him “preparatory to his second coming.” [1]

The Lord Jesus Christ called Joseph Smith to tell the world the truth about Himself and His Father’s divine plan for us. “This generation shall have my word through you,” the Lord told him (D&C 5:9-10).

As President Harold B. Lee said:

“With the restoration of the true gospel of Jesus Christ and the establishment of the Church in the dispensation of the fulness of times, we were given instructions by revelation, the magnitude of which, as the late President Brigham H. Roberts explained, was not merely as to whether baptism should be by immersion or for the forgiveness of sins, but the rubbish of accumulated ages was swept aside, the rocks made bare, and the foundations of the Kingdom of God were relaid.'” [2]

The revelations of Jesus Christ through the Prophet Joseph Smith and his successors are the foundation stones of His Church.  The cornerstone of truth is the fact that the Father and the Son spoke to the Prophet in that First Vision at Palmyra, New York. President Gordon B. Hinckley describes the significance of that vision:

“For more than a century and a half, enemies, critics, and some would-be scholars have worn out their lives trying to disprove the validity of that vision. Of course they cannot understand it. The things of God are understood by the Spirit of God. There had been nothing of comparable magnitude since the Son of God walked the earth in mortality. Without it as a foundation stone for our faith and organization, we have nothing. With it, we have everything.”

What fundamental truths-most significant of all-were restored through the Prophet Joseph? What are the revelatory “foundation stones” of the Kingdom of God? What deeply felt questions do they answer?

Does God exist? And if so, what is He like? The Prophet’s vision in the sacred wood provided him a correct understanding of the nature of the Godhead. Later revelations confirmed this understanding for all:

This revelation opens to the eyes of the world the startling fact that the God of the Universe lives, that He is like us, and that His Son Jesus Christ is also a resurrected being of flesh and bones.

What is the origin of man?

What is our origin? Along with a true understanding of God, the revelations also give us a true understanding of ourselves, our origin and our future. We learn the glorious truth that God is the Father of our spirits, and that we once lived in His presence. We learn that we are eternal, intelligent beings endowed with an infinite potential.  “Man was also in the beginning with God. Intelligence, or the light of truth was not created or made, neither indeed can be” (93:29).

What is the future of man?

What is our future? Will we live again? If so, what kind of life will it be? The revelations make clear that all will be resurrected because of the Atonement of Jesus Christ: “The spirit and the body are the soul of man. And the resurrection from the dead is the redemption of the soul. And the redemption of the soul is through him that quickeneth all things, in whose bosom it is decreed that the poor and the meek of the earth shall inherit it” (88:15-17).

We learn that the sanctified will inherit the earth, as Jesus promised anciently, and that the earth itself will be glorified “that bodies who are of the celestial kingdom may possess it forever and ever; for, for this intent was it made and created, and for this intent are they sanctified.” Thus, those who live “the law of Christ” will find themselves in a kingdom of celestial glory for eternity.

How do we become sanctified through the law of Christ?

To be “sanctified through the law of Christ” is to receive a place in His celestial kingdom. But how do we become sanctified so that we might come into His presence?

The answer is clear. The Doctrine and Covenants teaches us how to qualify ourselves for the ordinances of salvation administered through the priesthood of God.

The restoration of the Melchizedek Priesthood and the ordinances through the Prophet Joseph Smith made our sanctification possible.

“This greater [Melchizedek] priesthood administereth the gospel and holdeth the key of the mysteries of the kingdom, even the key of the knowledge of God. Therefore, in the ordinances thereof, the power of godliness is manifest .

And without the ordinances thereof, and the authority of the priesthood, the power of godliness is not manifest unto men in the flesh; for without this no man can see the face of God, even the Father, and live” (84:19-23).

From this we learn that without the ordinances of the priesthood-baptism, the gift of the Holy Ghost, the “mysteries” (the temple endowment) [3] -we cannot see the face of our Father in Heaven or, in other words, enter into His presence.

Who has the authority to administer the ordinances?

The Doctrine and Covenants teaches that the Presidency of the Church and the Twelve Apostles hold the keys of the ordinances.

“The twelve traveling councilors are called to be the Twelve Apostles, or special witnesses of the name of Christ in all the world-thus differing from other officers in the church in the duties of their calling….

“The Twelve … officiate in the name of the Lord, under the direction of the Presidency of the Church, agreeable to the institution of heaven; to build up the church, and regulate all the affairs of the same in all nations, first unto the Gentiles and secondly unto the Jews.

“The Twelve being sent out, holding the keys, to open the door by the proclamation of the gospel of Jesus Christ, and first unto the Gentiles and then unto the Jews” (107:23, 33, 35).

The sacred ordinances of salvation can only be performed under the authority of the Presidency and the Twelve and those delegated by them.

Where do we receive the ordinances of salvation?

The Lord revealed to the Prophet Joseph Smith the necessity of a house set apart for the administration of the ordinances, a temple “built unto His holy name”:

“And again, verily I say unto you, how shall your washings be acceptable unto me, except ye perform them in a house which you have built to my name? …

“Therefore, verily I say unto you, that your anointings , and your washings, and your baptisms for the dead, and your solemn assemblies, and your memorials for your sacrifices by the sons of Levi, and for your oracles in your most holy places wherein you receive conversations, and your statutes and judgments, for the beginning of the revelations and foundation of Zion, and for the glory, honor, and endowment of all her municipals, are ordained by the ordinance of my holy house, which my people are always commanded to build unto my holy name.

“And verily I say unto you, let this house be built unto my name, that I may reveal mine ordinances therein unto my people; for I deign to reveal unto my church things which have been kept hid from before the foundation of the world, things that pertain to the dispensation of the fulness of times” (124:37, 39-41).

What about those who die without knowledge of the gospel?

The justice of God requires that all who wish to receive the ordinances shall have the opportunity to do so. As a result, provision must be made for those who never have the opportunity in mortality. Baptism and the other necessary ordinances can be performed for them by proxy in the House of the Lord, as Joseph Smith explains:

“And again, in connection with this quotation I will give you a quotation from one of the prophets, who had his eye fixed on the restoration of the priesthood, the glories to be revealed in the last days, and in an especial manner this most glorious of all subjects belonging to the everlasting gospel, namely, the baptism for the dead; for Malachi says, last chapter, verses 5th and 6th: Behold, I will send you Elijah the prophet before the coming of the great and dreadful day of the Lord: And he shall turn the heart of the fathers to the children, and the heart of the children to their fathers, lest I come and smite the earth with a curse.

I might have rendered a plainer translation to this, but it is sufficiently plain to suit my purpose as it stands. It is sufficient to know, in this case, that the earth will be smitten with a curse unless there is a welding link of some kind or other between the fathers and the children, upon some subject or other-and behold what is that subject? It is the baptism for the dead. For we without them cannot be made perfect; neither can they without us be made perfect. Neither can they nor we be made perfect without those who have died in the gospel also; for it is necessary in the ushering in of the dispensation of the fulness of times, which dispensation is now beginning to usher in, that a whole and complete and perfect union, and welding together of dispensations, and keys, and powers, and glories should take place, and be revealed from the days of Adam even to the present time. And not only this, but those things which never have been revealed from the foundation of the world, but have been kept hid from the wise and prudent, shall be revealed unto babes and sucklings in this, the dispensation of the fulness of times” (128:16-18).

Even little children in the Church understand these truths today that the Lord has provided in His mercy a way for every one of us to return to our Father’s presence, whether living or dead.

Truly, the Doctrine and Covenants lays down the plain foundation of God’s divine plan for us and serves as a witness of a merciful Father in Heaven who is willing to bless us with all that He has if we are faithful in a few things.

Whoever selected the depiction of Joseph purporting to translate through a curtain: Shame! I could be wrong, but I don't believe there is ANY basis for showing the translation process in that manner. We should stop perpetuating that myth, that mischaracterization of the actual process.