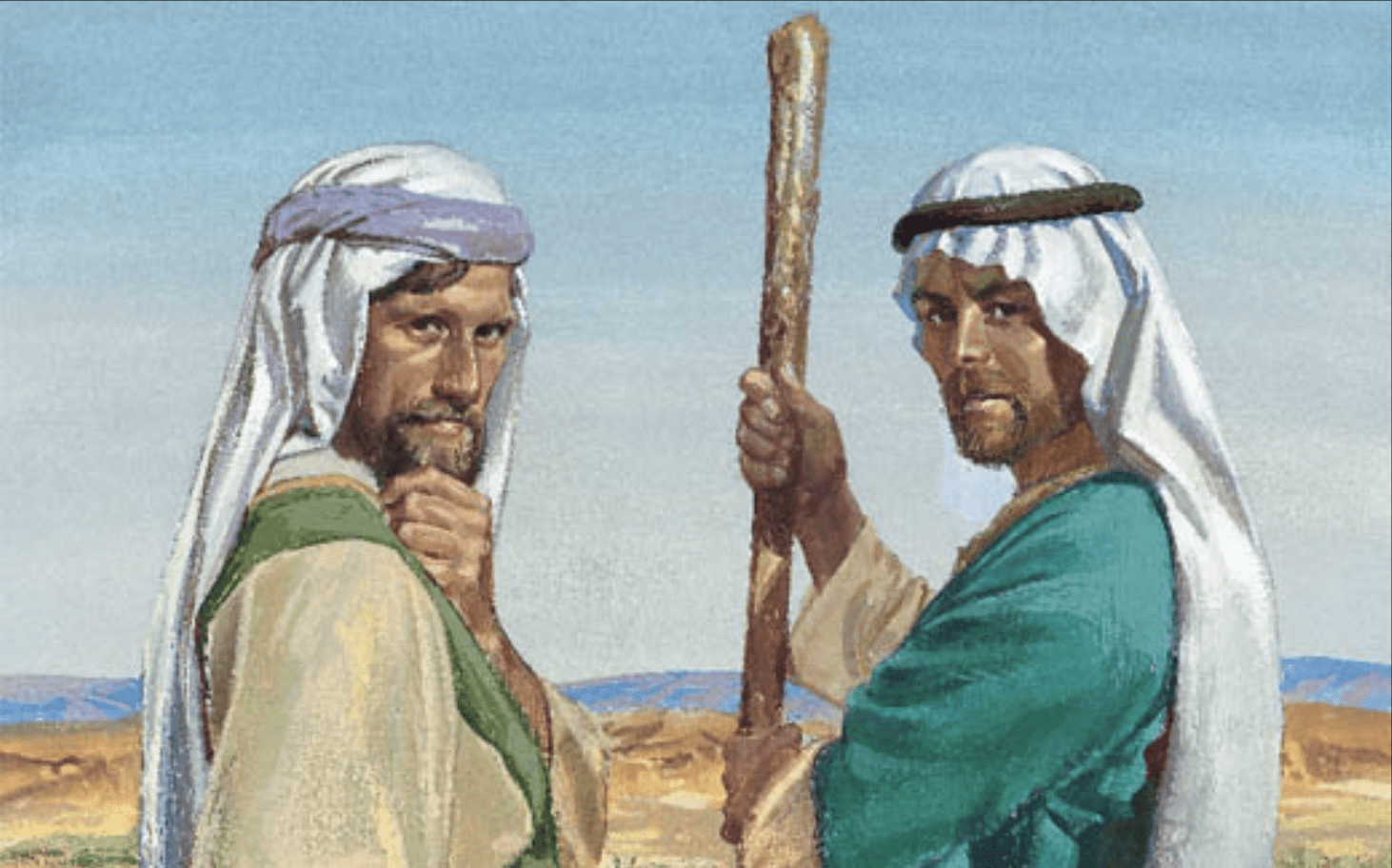 Learning from Laman and Lemuel

Anytime we identify only with the heroes of a scriptural story, we may be walking away from an important invitation to grow. It is by seeing ourselves in flawed people that we come to understand what we yet lack and what the Lord would have us do to develop spiritually. This may be especially true of our relationship with Laman and Lemuel.

We typically sit in Sunday School class or family scripture study and cluck at Laman and Lemuel’s rebelliousness. We identify with Nephi and the good guys. We consider ourselves more spiritual and devoted than those contrary brothers. However, making harsh judgments about them shows that we don’t understand them or the culture from which they came.

King Josiah’s reforms had a dramatic impact on Jewish culture. Around 622 BC, Josiah found the book of the law (probably the same law in the book of Deuteronomy) in the temple in Jerusalem. This led him to make major changes in religious practice including “removing pagan altars and idols from the Temple, destroying rural sanctuaries and fertility cults, and centralizing worship at the Temple of Jerusalem” (Encyclopaedia Britannica).

One of the effects of the Josian reforms was to focus the people on the written law. One side-effect of this change was to diminish any expectation of continuing revelation. Thus, it was perfectly natural, when Nephi inquired of Laman and Lemuel, “Have ye inquired of the Lord?” (1 Nephi 15:8), that they would respond “We have not; for the Lord maketh no such thing known unto us” (1 Nephi 15:9).

What they may have been saying was, “Are you serious? We have the law! We don’t need your dreams and visions. We follow the law faithfully and you desecrate it with your religious innovations.”

Laman and Lemuel may have been fully religious—in following Jewish law and custom according to Josiah’s reforms. In the context of Judaism at the time, Lehi and Nephi were the religious innovators, the apostates, the rule-breakers. In fact, that is one reason Nephi rejoices in Isaiah. Isaiah was a pre-Josian revelator who delighted in his visions of a coming Messiah. Nephi wanted to be like Isaiah.

Laman and Lemuel were scandalized by Lehi and Nephi’s religious innovations. They saw their revelations as suspect. They saw Lehi and Nephi as breaking the sacred tradition from Deuteronomy.

If that is true, there is a clear parallel with modern Christianity and the Restoration. Joseph was the outlier. He defied all religious rules and traditions of his time.

Joseph tells of being in the company of one of the Methodist preachers when he “took occasion to give him an account of the vision which I had had. I was greatly surprised at his behavior; he treated my communication not only lightly, but with great contempt, saying it was all of the devil, that there were no such things as visions or revelations in these days; that all such things had ceased with the apostles, and that there would never be any more of them” (JS-H 1:21).

The Restoration opened the heavens in wonderful ways—but in ways that disturbed and offended the religious people of Joseph’s time—and even most Christians today.

Our instinctive answer may be, “I gladly welcome all the revelation God has sent and is sending.” Maybe.

The Prophet Joseph reported of the saints in his time: “I have tried for a number of years to get the minds of the Saints prepared to receive the things of God; but we frequently see some of them, after suffering all they have for the work of God, will fly to pieces like glass as soon as anything comes that is contrary to their traditions.” (Joseph Smith, Teachings of Presidents of the Church: Joseph Smith, p. 520).

What traditions keep us from receiving new counsel from the leaders of the Church? More difficult questions: What keeps us from seeking and receiving revelations like Lehi and Nephi? How are we doing at recording and acting on the impressions that come to us every day? Do we seek counsel from departed ancestors and heavenly visitants? Do we carefully test new ideas by the Spirit? Do we feel encircled in the arms of His love?

Joseph offered this bracing challenge: “God hath not revealed any thing to Joseph, but what he will make known unto the Twelve & even the least Saint may know all things as fast as he is able to bear them.”

Wow! I certainly have not received all that Joseph received!

I absolutely believe that God does not send revelation for our amusement. He sends what we need, what we are ready to use, and what we will guard carefully. And almost all of us live beneath our privileges.

So, before we dismiss Laman and Lemuel as slackers, we might ask ourselves, are we doing better than they at inquiring of the Lord, seeking heavenly counsel, and following it? Sometimes we may be more like Laman and Lemuel than we realize.

Maybe God is inviting us every day to receive His counsel and guidance for the journey of life. Perhaps we are wandering in mists of darkness when we could be guided by the heavenly light of personal revelation to partake of the sweet fruit of the love of God.

Thanks to Barbara Keil and Annie Foster for their contributions to this article.

This article is thought-provoking! I have reconsidered my understanding of the word "tradition." We usually think of tradition as the transfer of information or culture from one generation to another. However, in our modern day, I think tradition can also refer to the transfer of information or culture from one person or group to another. Under this definition, some of the traditions that have come into vogue today are social media, and our reliance upon the news media for our understanding of what is happening in the world. Sometimes, these sources of "truth" are in direct opposition to the Lord's sources of truth, which are scripture, prophets, and personal revelation.

Although we may be like Laman and Lemuel in many ways, I wonder why did they think so often that murdering a family member was the solution? If they were faithful Jews, wasn't murder considered a sin in their religion? I'm not sure how religious they really were.