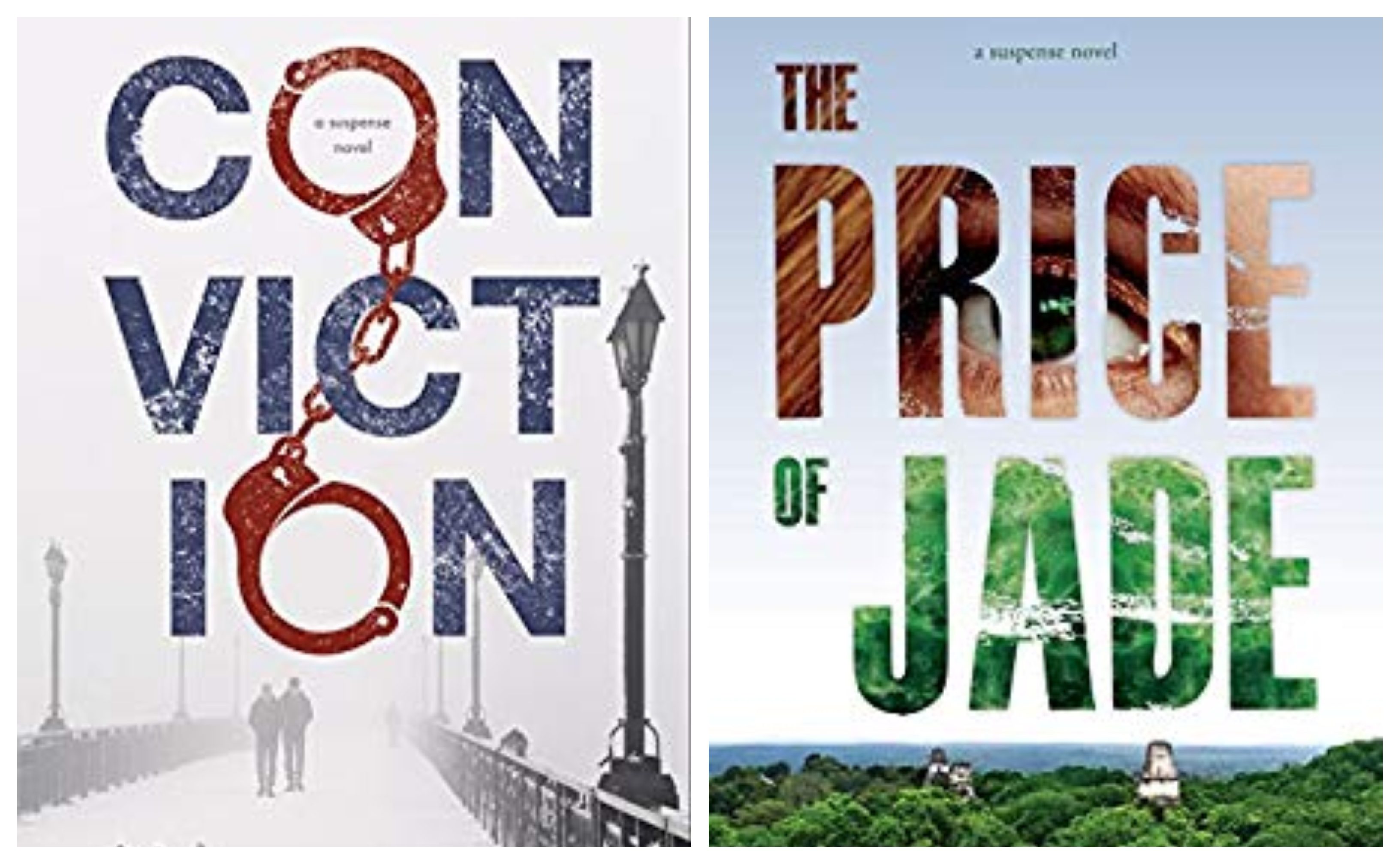 It’s always exciting to discover new writers and when those writers deliver powerful, well-told stories, I want to tell everyone. Such is the case with Robbin J. Peterson, author of Conviction and Liz Hastings, author of The Price of Jade. Both books draw heavily on recent real events which attracted worldwide attention and both will keep readers absorbed until the last page.

It’s not often that two missionaries from the same small town are called to serve in the same mission at the same time. They also fly from Utah to the Ukraine together. The problem is they have a negative history. Back in high school Neal Christensen was involved in a revenge prank perpetrated by Brett Tyson’s ex-girlfriend. She blamed Brett for the mean-spirited prank which cost him the football scholarship he had been counting on. Neal hadn’t confessed his part and cleared Brett. Now as a missionary his conscience prompts him to tell the truth, both to Brett and to his mission president. On the flight, he finally confesses and apologizes to Brett which widens the gulf between the two. When he tells his mission president, he fears he will be sent back home. Instead he is instructed to write a letter to his parents, to Brett’s parents, and to their former high school principal, who was the victim of the prank, to tell them what really happened.

Living in Ukraine is nothing like Neal expected and learning the Russian language is particularly difficult for him. Following an odd experience with his companion, police officers barge into their apartment in the middle of the night. Neal is beaten and hauled off to prison, accused of stealing a six million dollar ring from the museum he and a group of other missionaries had visited that day. He befriends an old man with whom he shares a cell. He also learns to more fully rely on the Lord. His mission president is his only visitor.

A month later he leaves the brutally staffed holding facility for a quick trial and a sentence of twenty years in a prison labor camp. It’s 2013 and while there, Russia, in cooperation with pro-Russia Ukrainians, invade that portion of the country near their border which includes the town where the prison is located. Chaos, smoke, and death are everywhere. Neal’s only chance of survival is to make his way across the war torn country to the mission home in Kiev. Along the way he joins forces with another refugee, the sister of a fellow prisoner.

Conviction is a compelling story. It’s one readers won’t want to set down for any reason. It’s near history and based on the experiences of several real people. It’s easy to sympathize with and care about young men set down in a world with which they’ve had little to no experience. The mission president, a few locals, and some of the prisoners are easy to admire for their strength and determination. The background and setting for this story is as real in detailing a high school prank gone wrong as it is in recounting the brutality of war.

A major element of Conviction is the spiritual journey taken by Neal as he progresses from a boy who let someone else take the blame for his actions to a strong man with absolute trust in the Savior who will willingly give his life for others and take responsibility for his own actions. Even the title is a play on words, meaning both conviction for a crime and conviction as a fixed or firm belief. This book is recommended for those who enjoy an exciting, action-packed story, those who like a suggestion of romance, and especially for those who enjoy the intricate development of a true testimony of Christ’s love. Though the events occurred as recently as 2013, I think History buffs will like this one too.

Robbin Jensen Peterson lives in California. She attended Snow College and is a graduate of Utah State University. Conviction is her second book.

THE PRICE OF JADE by Liz Hastings

Debut author Liz Hastings’s first novel The Price of Jade will leave a lasting impression on readers. This contemporary suspense novel begins with the real massacre of hundreds of Achi Maya natives in Guatemala by the army of their own government in 1982. The victims were mostly women and children. The story then jumps forward to an American family preparing for a Book of Mormon Tour vacation in Guatemala. Mother and daughter are ready to fly out, but the father is delayed a few days because of business concerns.

Matt works for a company that deals in precious gem stones. Gradually he has let work consume his time and attention. He has a private arrangement with a man he met while serving a mission for the Church in Guatemala who discovered a large cache of jade following the 1998 hurricane. Matt is the go-between who arranges the import of the small jade shipments for his company. The man in Guatemala wishes to keep the location of the jade secret even though the company and others would like to acquire all of the jade in one lump amount. Matt drops everything and grabs a quick flight to Guatemala when he receives a desperate emergency call from his wife.

Cathy, the mother starts out frustrated with her husband’s delay. She feels like he always puts work ahead of her and their daughter. She’s frustrated, too, by her daughter’s sulky, rude behavior. She blames that on her husband as well, since he’s the one who disapproves of the daughter’s boyfriend, tactlessly laid down some strict rules, then left for work leaving her to deal with the fallout and travel alone with the pouty girl. Being unable to speak or understand Spanish, she is at a distinct disadvantage when her daughter disappears.

Melissa is seventeen and fancies herself in love with Josh who encourages her to do things she knows her parents would disapprove of. She doesn’t want to go to some South American country. She figures the trip is just an excuse to keep her away from Josh and cram church down her throat. In an act of defiance, she wanders off from the tour group with a native boy while her mother is on her phone talking to her dad. Her action proves disastrous as she is kidnapped, tied up, and thrust in a deep, dark hole with little food or water.

Raul works for the tour company. He was a very young soldier when he fell in love with a village girl. Destroying villages and murdering the inhabitants sickened him so he deserted the army, but was too late to save the girl he loved. More than three decades later he becomes involved in the search for another missing young woman.

The characters are not always likable, but they are realistic. The setting for the story is executed in vivid detail, becoming part of the story, deepening and enriching the reader’s experience. Background details are conveyed as needed and without stopping the story. The author sustains the tension level throughout the story and builds the plot in a convincing manner. The ending was the only troublesome area. Not enough information was given to clarify why the final clue mattered in solving who was behind the kidnapping. Also the final happy event felt too contrived. Overall, there are more pluses than minuses in The Price of Jade, and I predict this is a new author worth watching, one who will quickly capture a strong following.

Liz Hastings is a Wyoming native who attended BYU and currently lives in Utah. She is married and the mother of seven children.

THE PRICE OF JADE by Liz Hastings, Published by Covenant Communications, Inc., 263 pages, soft cover $16.99. Also available on CD and for eReaders.