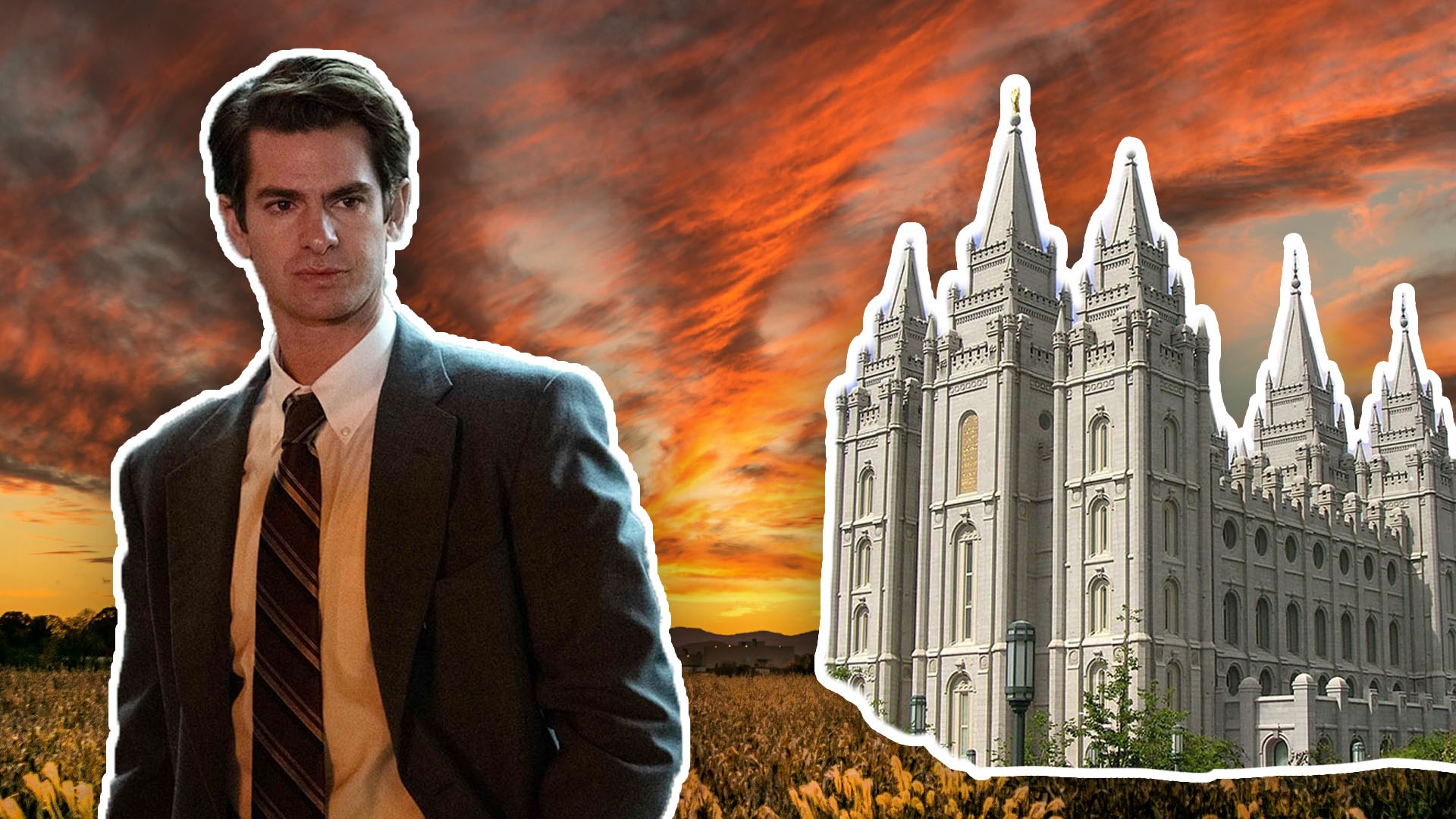 To view this post and have access to all the listed resources, visit Book of Mormon Central.

Hulu’s newest miniseries Under the Banner of Heaven presents an imaginative retelling of the harrowing murder of Brenda Lafferty in 1984 by Dan and Ron Lafferty, former members of a splinter group from the Fundamentalist Church of Jesus Christ of Latter-day Saints (FLDS Church). Starring Andrew Garfield as a fictional Latter-day Saint detective, the TV series explores the possible causes of such violence and the cultural background of the Latter-day Saint or Mormon movement.

Curious viewers may be interested to know how the violent crime of the Lafferty brothers intersects with the teachings and influences of the Church of Jesus Christ of Latter-day Saints. Others may be curious about how accurately the series portrays Latter-day Saints and fundamentalist splinter groups.

Viewers should be aware that in addition to adult content (this TV-MA show portrays frontal nudity, violence, and profanity), this series may portray the faith in ways that are at odds with historical reality and the lived experience of millions of Latter-day Saints. The religion of the criminal perpetrators is depicted as extreme with violent proclivities that supposedly stem from their sacred temple ordinances.

We invite any who are curious to learn more about Latter-day Saint topics such as temple ordinances, sacred clothing, events in church history that include violence, and polygamy. Here are just a few perspectives and resources on some of the issues that Under the Banner of Heaven tackles. You can also look forward to new, forthcoming content from Book of Mormon Central on many of these topics.

Reviews from Latter-day Saints on the TV series and book Under the Banner of Heaven:

Violence in the Church of Jesus Christ of Latter-day Saints

The forefront issue in this series deals with the horrific violence of the Lafferty brothers in American Fork, Utah in 1984. The underlying question the series poses is, what influences could have driven people to commit such heinous crimes? The series suggests that a motivating factor to the crime was the “violent” underpinnings of the Latter-day Saint or “Mormon” movement.

We can agree with the producers of this series that the crimes of the Lafferty brothers were reprehensible and wrong. The Church of Jesus Christ of Latter-day Saints is clear in its condemnation of violence and proclaims the gospel of peace. In this past month’s General Conference, President and Prophet Russell M. Nelson urged members of the church to eradicate conflict from their lives, and emphasized that “Any war is a horrifying violation of everything the Lord Jesus Christ stands for and teaches.”

Like all religions, political organizations, activist causes, and social groups, the Church has had members deplorably aberrate from the official teachings of the gospel of Jesus Christ. The Lafferty brothers were excommunicated from The Church of Jesus Christ of Latter-day Saints, joined the Fundamentalist Church of Jesus Christ of Latter-day Saints, and later joined the break-off group The School of the Prophets, before leaving and committing murder. Yet despite the Lafferty brothers disaffecting from affiliation with these religious groups, the series tends to characterize the broader Latter-day Saint movement in a similarly extreme light. Yet, the American Communities Project identified Latter-day Saint communities as “averaging only one-third of the national average” of reported violent crimes per 100,000 people. For more perspectives on violence and religion see the articles below.

One such example of unauthorized and tragic violence is known as the Mountain Meadows Massacre. In 1857 a group of Latter-day Saints in southern Utah attacked and killed 120 members of a wagon train emigrating from Arkansas. Miscommunication with church headquarters, incendiary rhetoric from local religious and civic leaders, heightening military threats from the Utah War, and reports of violence against Latter-day Saints all contributed to the environment that led Latter-day Saints to commit these acts. The leaders of the massacre were excommunicated.

Of the event, President Henry B. Eyring taught, “The gospel of Jesus Christ that we espouse, abhors the cold-blooded killing of men, women, and children. Indeed, it advocates peace and forgiveness. What was done here long ago by members of our Church represents a terrible and inexcusable departure from Christian teaching and conduct.” To learn more about Mountain Meadows Massacre, see the resources below.

The Tarring and Feathering of Joseph Smith

Latter-day Saints have suffered violence at the hands of aggressors since its earliest days, and a particularly well-known example is in 1832, when Joseph Smith was tarred and feathered along with Sidney Rigdon. When a mob ripped Joseph Smith from his bed at the Johnson home in Hiram, Ohio, they had him beaten, tarred, feathered, and abandoned barely breathing in a field. During this episode, there was some intent to mutilate him, but they were ultimately unsuccessful. The Church history volume Saints recounts:

After they had gone some distance from the house, they tore away his clothes and held him down while a man approached with a sharp knife, ready to mutilate him. But the man took a look at Joseph and refused to cut him.

Critics of the church have cited late second-hand accusations that the mob sought to castrate Joseph Smith as punishment for adultery with Marinda Nancy Johnson. However, there is little evidence to support any impropriety with Marinda Johnson, and the leader of the mob, Symonds Ryder, claimed that the reason for the attack was the false threat of Saints seizing private property. Marinda Johnson even later testified that, “during the whole year that Joseph was an inmate of my father’s house I never saw aught in his daily life or conversation to make me doubt his divine mission.” Learn more about this episode in Church history from the following sources.

Polygamy in the Church of Jesus Christ

Under the Banner of Heaven also explores polygamy in the Latter-day Saint movement. The Church of Jesus Christ of Latter-day Saints has not practiced plural marriage for over 100 years, and they believe that marriage between one man and one woman is God’s standing law of marriage. Individuals who currently practice polygamy are outside the authority and beliefs of the Church.

Members of the church practiced plural marriage for more than half a century when Doctrine and Covenants 132 was revealed to Joseph Smith in the 1840s. In addition to plural marriage, this revelation expounded on the doctrines that allowed for couples to be sealed for time and all eternity in the new and everlasting covenant of marriage. Learn more about polygamy with videos from Book of Mormon Central, and articles from the Church.

Since their earliest days, Latter-day Saints have built special houses of worship to perform sacred ceremonies and to draw closer to God. These buildings and ceremonies are not open to the public because of their deep, sacred significance to Latter-day Saints. Members of the church who meet certain standards of belief and behavior can enter the temple to make special promises to God and to unite their families forever in binding ordinances. Those who are not members of the church are welcome to respectfully learn more about what goes on inside Latter-day Saint temples through online resources. They are also welcome to tour certain temples that have not yet been dedicated, such as the Washington D.C. Temple, which is now open for public tours. You can learn more about Latter-day Saint temple ceremonies, with our collection of resources.

Violence in the Temple Ceremonies: The Oath of Vengeance

Under the Banner of Heaven suggests that the murderers’ violent proclivities may derive from violent rhetoric in the sacred temple ceremonies of the Church of Jesus Christ of Latter-day Saints. The covenants in the endowment ceremony are very sacred and are not to be discussed disrespectfully. However, they do not, and never have, explicitly condoned or encouraged members of the Church to commit acts of violence.

After the martyrdom of Joseph and Hyrum Smith, a portion of the endowment importuned Saints to pray to God to avenge the deaths of Joseph and Hyrum Smith, not to avenge their deaths themselves, in accordance with Revelation 6:10 and “imprecatory” biblical Psalms. This portion of the endowment ceremony was removed in the 1920s. David H. Cannon explained that,

“The law of retribution is: To pray the Father to avenge the blood of the prophets and righteous men that has been shed, etc. In the endowment house this was given [as a personal responsibility] but as persons went there only once, it was not so strongly impressed upon their minds; but in setting in order the [script for] endowments for the dead it was given as it is written in [the] 9[th] Chapter of Revelations[,] and in that language we importune our Father, not that we may, but that He, our Father, will avenge the blood of martyrs shed for the testimony of Jesus.” (Devery S. Anderson. The Development of LDS Temple Worship, 1846-2000: A Documentary History. Signature Books. Kindle Edition.)

Learn more about adjustments to the temple endowment ceremony with these articles.

Violence in the Temple Ceremonies: Penalties

Before 1990, the temple endowment covenants included strong admonitions against revealing the most sacred parts of the temple ordinance. Contrary to frequent misrepresentations, they did not require inflicting physical injuries on others or on oneself. The penalties impressed how determined we should be to resist those who would encourage us to violate those temple promises.

Temple covenants follow a formulaic pattern established in the Old Testament for making promises with God that include among other things establishing the terms of the covenant, outlining blessings for obedience, and consequences for disobedience.

While the idea of penalties may sound harsh or foreign, most children have probably already participated in them. If you ever made a pinky promise on the playground as a kid, you may have accompanied it with something like, “cross my heart and hope to die, stick a needle in my eye.” You are not supposed to take those penalties literally, but you are trying to impress upon your friend just how seriously you’re taking that pinky promise. You can learn more about biblical and modern covenant patterns with articles and videos from Book of Mormon Central.

The new Hulu series brings up a lot of fascinating topics in Latter-day Saint history and culture that deserve exploration. Under the Banner of Heaven is a very loose and sensationalized retelling of the story, but Latter-day Saint history and culture is rich and exciting on its own merits. In the last twenty years since the book was published, myriad research and scholarship has come forth illuminating some of these difficult topics in new ways. We invite curious viewers to learn more about these topics such as polygamy, temple ordinances, and violence from the voices and perspectives of Latter-day Saints. We aim to build bridges of understanding instead of walls of division.