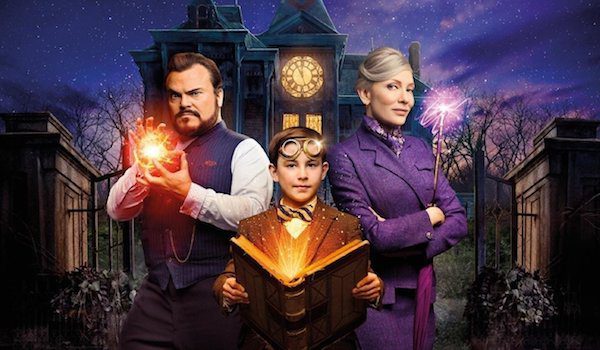 Latter-day Saint Moviegoers: Is ‘The House With a Clock in Its Walls’ Okay for Your Family?

WHAT’S THE HOUSE WITH A CLOCK IN ITS WALLS ABOUT?

A young boy’s parents are killed and so he has to live with his strange uncle, who he learns is a warlock.  Intrigued, he wants to learn magic too, but he’s not quite prepared for what happens next. The house has an inexplicable clock in its walls, left by the evil warlock who lived there before. Together, the boy, his uncle, and the quirky neighbor from next door have to solve the mystery by using their wits and magic powers before it causes the end of the world as they know it.

The House with a Clock in its Walls  is rated PG, but parents and critics alike argue that director Eli Roth has really pushed those boundaries.  He is known for his scary, gory movies, and doesn’t seem to quite have a handle on what’s inappropriate for kids.  Young children could be very frightened by this movie.  Parents need to use good judgement on this, as the rating is pretty deceiving.  Even Jack Black’s character utters the words, “So creepy” during a scene.  Young children may become frightened by pumpkins this Halloween season.

Things to be aware of:

Jack Black and Cate Blanchett’s characters are dear friends, yet they constantly call each other names.  Of course, it’s somewhat endearing and intended to conjure up laughter from the audience, but talk to your kids about the difference between playful banter and rude insults that might hurt other people’s feelings.

There is a handicapped kid with leg braces in a couple of scenes, so there is some brief bullying of him and the main character boy. Profanity is used 3 times.  A topiary griffin poops mulch in the pool and other places. You expect poop jokes when a movie is targeted towards kids, but the tone of this movie makes it seem oddly placed.  Still funny though.  A baby boy without a diaper shoots pee.

The boy in the movie uses a lot of big words, which is great fun for a wordsmith, but could be confusing for young kids. You might need to provide definitions for some of the words for your children.  There’s a lesson for parents in being more patient and understanding with their children. Cate Blanchett’s character says, “Children make mistakes.”

Although a bit out of place and potentially confusing for children, there is an interesting sequence that shows the painful and long-lasting effects of war on families.  The entire plot of the movie takes some turns and can be confusing for kids.

The cemetery scene is super creepy and scary for little kids, unless you’re looking at tombstones to do genealogy! Necromancy is demonstrated and featured in the second half of the movie.  Talk to your children about the resurrection and how it is MUCH different from what they will see in this movie.

Friendship is a strong theme in the movie.  Cate Blanchett’s character states, “I’ve found that all we need in this world is a good friend.”  Another message that carries throughout the film is to “be indomitable.”  We all have battles to fight and we simply need to be brave and walk through them.  Jack Black’s character references Einstein when he said, “Life is like a bicycle. To stay balanced, you have to keep moving forward.”  Good advice.

Another message that the movie tries to hit home is to embrace your weirdness and accept yourself for who you are.  Cate Blanchett’s character explains, “You’re the only YOU in the whole universe.” Society seems to really be picking up on that idea with popular movies like The Greatest Showmanand all of the Marvel movies.

Speaking of Cate Blanchett, she is wonderful in this movie, as always.  Her character bakes a lot of chocolate chip cookies and she announces, “There are very few problems in the world that can’t be helped by a chocolate chip cookie.”  Agreed.  When she encourages the boy to not be afraid to be weird or different, she tells him that it’s the nuts in her cookies that make them interesting.   The uncle lets the boy eat as many cookies as he wants for dinner, rationalizing that they’re “far more delicious” than regular dinner food.  Still agreed.  After seeing the delicious looking cookies several times during the movie, I went home from the theater and baked up a batch myself.

Edward Gorey (perfect last name for a Halloween movie, eh?) did the illustrations for the book, which the movie sets were based on.

If you see this movie in 3D on the IMAX, you’ll be treated to a digital remaster of Michael Jackson’s epic music video to his album feature of Thriller!  Young kids may have never seen it before and might even be frightened by the scary zombies.  I had forgotten how scary it was.  One of these days I’m going to learn that awesome choreography.

I loved the magical backyard starry scene.  I get a kick out of random movie trivia.  For example, when this movie was shipped to theaters, the pseudonym “Kimono” was used.  Ha ha   Jack Black’s character wears one in the movie.  Jack Black is perfect in the role of the weird uncle in this movie.  He’s one of those actors who makes you laugh just by being on the screen.  So, while this movie gets you in the mood for Halloween, viewer beware.

Want a can’t-fail movie night? Pick up a copy of 250 Great Movies for Latter-day Families!

Trina Boice is an author of 23 books and teaches online for BYU-Idaho in the Pathway program.  She received the Young Mother of the Year honor in 2004, an award that completely amuses her 4 sons. She’s a popular international speaker in China and writes movie reviews at www.MovieReviewMom.com  You can find her books in LDS bookstores, on Amazon, and at www.TrinasBooks.com

I saw this movie and loved it! However, I would never take a young child to see it. Much too scary.

This is a PG-13 movie in my opinion. I'm NOT a fan of "horror movies" at all. My idea of the perfect Halloween movie is "Hocus Pocus". My spouse and I loved this movie. Great acting, great humor ("bad kitty" line hysterical), and enough "scary" to make it fun. THAT said, I will not take my 8 yr old granddaughter to see this. She is prone to nightmares and I'm certain several scenes would haunt her. On the other hand, my "tough-as-nails" 12 yr old granddaughter will love this. She loves a good scare, differentiates well between fiction and fact.