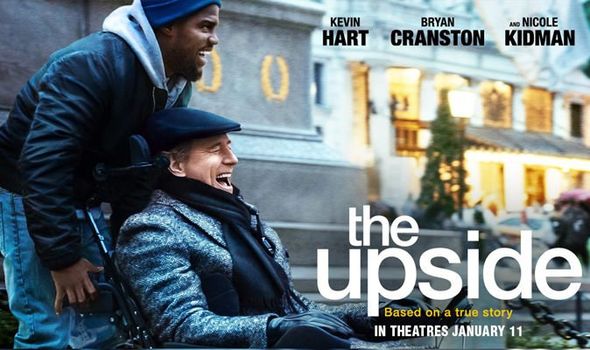 Join the search for Gospel principles in Hollywood movies with this group founded by Jonathan Decker, author of 250 Great Movies for Latter-day Families. For daily reviews “like” us on Facebook!

WHAT’S THE UPSIDE ABOUT?

Kevin Hart plays an ex-con who gets hired by Bryan Cranston’s character, who is a rich quadriplegic needing assistance. The unlikely pair have much to learn from one another and develop a lasting friendship and respect that still exists today…in other words, it’s based on a heart-warming true story! It’s also a remake of a French movie called Intouchables, which was the most successful French film in history in several European countries.

I LOVED it! It’s uplifting, heart-warming, funny, and charming at times. You might even get a little teary-eyed. Sure, there are some plausibility holes in the story, despite it being based on true events. In the end, you feel good and you want to do something good for someone.

The acting in the film is good all around. If you usually don’t like Kevin Hart because he plays the same  screaming character in every movie, you might actually enjoy him in this movie. He did very well with the drama and, of course, shined when he needed to with his comedic chops. He and Bryan Cranston have great chemistry together. Bryan Cranston. Nicole Kidman is fantastic. Aja Naomi King brought impressive depth to her role. I loved the way Julianna Margulies’ character explained the Shel Silverstein book The Missing Piece What a great metaphor in this movie, to which Bryan Cranston’s character replies “That’s really deep for a children’s book.” The film tackles difficult subjects like the death of a loved one, a single mother dealing with a dead-beat dad, paralysis, race, wealth, trust, hope and even love. While some might feel it leans toward preachy, I found it light and inspiring.

There are a couple of scenes that involve changing a quadriplegic’s catheter and all of the humor and awkwardness you would expect that would include. There is profanity a few times, including 1 F-bomb. Two men get high on marijuana and there is some alcohol consumption in a few scenes. You see a tatted-up Kevin Hart without a shirt on. There is a brief expression on a woman’s face who is…ummm…enjoying being in bed with her husband, as well as some talk about a “blue” pill and what happens. Two men spend time with prostitutes and there is talk of pornography in a couple of scenes.

Second chances, the pain of losing a loved one, the limits of wealth in bringing happiness, economic barriers, race, friendship, hope.

WHAT’S HOLMES AND WATSON ABOUT?

This terrible comedy takes the old British “whodunit” characters of Sherlock Holmes and Dr. John Watson, and attempts to modernize them with slapstick humor.  The plot is very thin and, in fact, the audience is told at the beginning of the movie that none of it really matters.  They’re right.

Sadly, it’s just not funny. British author Sir Arthur Conan Doyle would be rolling over in his grave if he ever saw this movie disaster.

IS IT ANY GOOD?    Nope.  Holmes And Watson is just really stupid.  Here’s an indication of how bad this movie is….when Sony tried to sell the film to Netflix, the streaming service declined.  Theaters have reported that there has been an impressive amount of audience members who actually walked out of the Holmes And Watson movie because they thought it was so awful.  It has a mind-boggling low 8% score on the “Tomatometer” on Rotten Tomatoes.

There is a lot of physical comedy and slapstick.  That’s good if you like that kind of humor, but if you’re hoping for more intelligent humor, you won’t find it here. It’s just lazy film-making.  There is some really terrible voice-over dubbing and the editing is noticeably bad.  There are several scenes where they’re eating onions, but you can tell they’re really not eating onions and it just looks foolish.  Audiences are a lot smarter than this movie gives them credit for.  There were a lot of political jabs at the United States and its president.  Once might be funny, but it gets old real fast.  There is also a random, terrible musical number that is simply painful to watch.

It’s surprising that two-time Academy Award nominee Ralph Fiennes said yes to this script.  There is a funny cameo of Billy Zane though.  He had it right…make a 5 second appearance and be done.  Steve Coogan and Rob Brydon are two British comedians who are beloved in their country, yet haven’t had a huge break in the USA.  It’s too bad they picked this slog of a film to be in.

There are some nods to the concepts of friendship and loyalty.  The two characters learn to trust each other and work well together. Another worthwhile message is the classic Sherlock Holmes talent of using logic and deduction to solve problems.  Some of the scenes feature Holmes’ unique skill of picking up on small clues to solve a crime.

If you try to follow the Thirteenth Article of Faith, which reminds us to seek after things that are “virtuous, lovely, or of good report, or praiseworthy,” then you should probably just skip this disappointing film.

Movie Review Mom:  Trina Boice teaches for BYU-I and is an author of 25 books.  You can read more of her reviews at www.MovieReviewMom.com  Because she is a popular speaker in China and loves to travel around the world, she created www.EmptyNestTravelHacker.com  You can see all of her books and win prizes at www.TrinasBooks.com  You can also find @TrinaBoice on Facebook, Instagram, Pinterest, and Twitter.