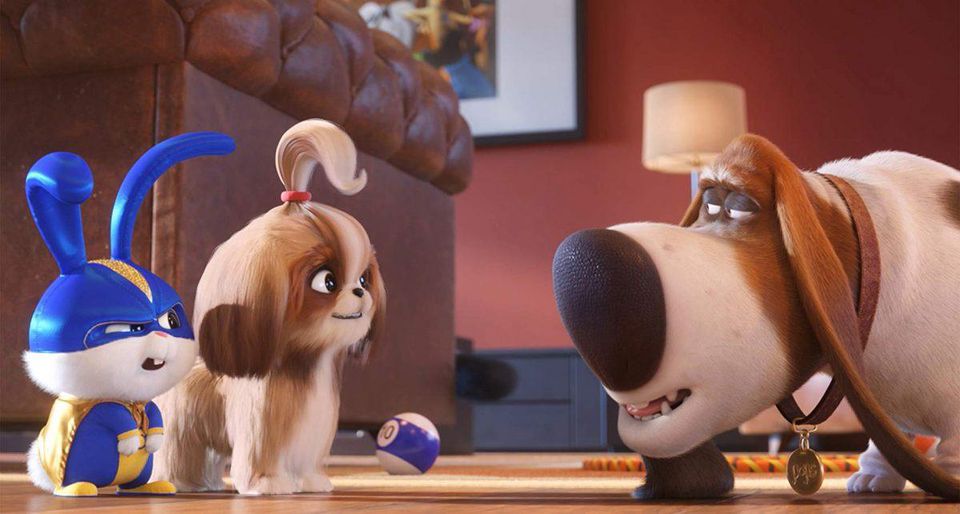 For movie reviews and entertainment news, visit www.MovieReviewMom.com and say hi on our Facebook page!

This doggone sequel is totally adorable and even better than the first in many ways.  Max the dog loves the new baby his owners just had and finds it difficult to cope with the dangerous world that threatens his new best friend.  Max’s other friends also learn lessons of courage on their own adventures.

There are many of your favorite characters from the first The Secret Life of Pets but plenty of new ones to add to the fun. This is Illumination’s first sequel since the Despicable Me franchise. You don’t really need to have seen the first movie to understand this one at all. You can read my review of the first movie at  https://moviereviewmom.com/?s=the+secret+life+of+pets

It’s going to be impossible to write this movie review without using the words “cute” and adorable” a thousand times.  This family-friendly film is so colorful with so many cute details and filled with so many ridiculous moments and funny sequences that you will laugh out loud.

Jenny Slate has the perfect voice for animation too. Her character, Gigi, is totally cute. I mean, seriously, so cute.  Harrison Ford! What a fun surprise.  This is his first animated film.  Another character in the movie is New York City itself.  It looks almost magical and like a great place to live and have an adventure.

Unfortunately, there isn’t really a cohesive plot like in the first The Secret Life of Pets. This film features more of a collection of 3 different adventures the animals go on.  What they have in common are that the pets are friends and know each other, as well as the theme of developing courage in each story.  There is a lot of chaotic, frenzied action which may tire parents out at times.  You might want to sit in a quiet room for a while after listening to Kevin Hart for an hour and a half.  Very young children might be confused when the stories flip in and out.

My niece served her LDS mission in Russia and told me that Russian people are very aware that “bad guys” in American movies are almost always Russian. She said it hurts their feelings.  So yeah, there’s a Russian bad guy in this movie.

First of all, your kids will want a pet after seeing this movie!  Be prepared.  You might need to explain to young kids what catnip is and why it works the way it does on cats because there is a scene where a cat gets “high.”  Some animal cruelty is portrayed by an evil circus man. The film doesn’t necessarily preach an anti-circus message, but your kids might get that impression.  A woman intentionally hits a man with her car.

Developing courage is the strongest theme in the movie.  Rooster (voiced by Harrison Ford) explains, “The first step to not being afraid is acting like you’re not afraid.”  Later, Max the dog (Patton Oswolt) learns, “You never know what life is going to throw at you and you have two choices: run from it or run at it.”  When we want to sit and get comfortable, we stop learning and growing.  It takes great courage to step across our own growth edge each day.  The Book of Mormon is filled with examples and stories of courage, such as the sons of Helaman, who were described as being exceedingly valiant for courage (Alma 53:20-21).

Max also learns, “Everything changes. Nothing stays the same for long.”  Both of those are important lessons for children and adults to learn.  Rather than complain about challenges or be afraid of them, we should embrace them as learning opportunities and accept them as the great adventures they are.  The Secret Life of Pets 2 is a feel-good movie that demonstrates impressive character arcs for pets.  Hopefully, the same growth can be said of us at the end of our lives!