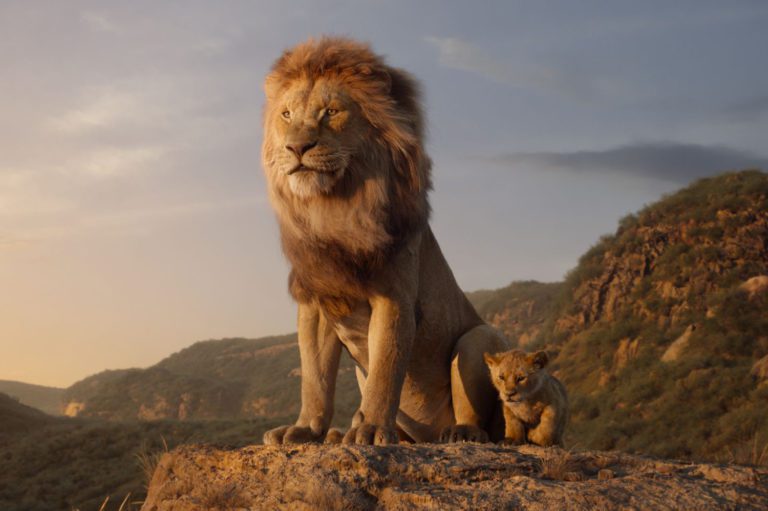 Latter-day Saint Movie Review: How Does “The Lion King” Compare to the Original?

It’s been 5 minutes, so that means it’s time for another Disney remake!  If you’re like me, you’ve probably seen the 1994 original movie The Lion King at least a dozen times, right?  My kids grew up watching it over and over.  The story in a nutshell is that a lion prince is deceived by his evil uncle and exiled from the kingdom until he grows up and accepts his rightful place as king after his father is killed.  Did that synopsis give too much away?  Luckily for Disney, nostalgia sells.

While the virtual reality CGI is truly stunning, even mind-blowing, The Lion King “live-action” doesn’t have quite the magic, emotion, and charm of the sweet animated original. The film is often referred to as a “live action” but it doesn’t actually have any humans in it.  It kind of feels like you’re watching a Disney Nature documentary but with voiceovers from actors. It’s an odd mixture that’s leaving fans disappointed.

The Lion King remake was directed by Jon Favreau, who did an outstanding job with The Jungle Book (2016) (Theatrical) remake, so audiences were expecting great things for this film. In the first movie, we fell in love with the artistry, music, humor, and creativity, while in this second one, what’s most admirable is the technology.

The talented cast includes James Earl Jones, Chiwetel Ejiofor, Beyonce Knowles, Seth Rogen, Keegan-Michael Key, John Oliver, Billy Eichner, Donald Glover, Alfre Woodard, John Kani, Eric Andre, JD McCrary, and Shahadi Wright Joseph.  Unlike the original animated movie, all of the lions are voiced by actors of African descent.  Director Jon Faverau said he wanted to invite James Earl Jones back because his voice sounds like a king who has ruled for a long time.  He’s fantastic and wonderfully familiar in this movie.  Favreau encouraged the actors to improvise a lot. Apparently, quite a bit of what they came up with stayed in the film

The only two other people who reprise their roles from the original movie were Elton John and Hans Zimmer who created the songs and music.  The new highlight is Beyonce, who voices “Nala” and sings a new song that she wrote especially for the movie.  You’ll love her new album The Lion King: The Gift.  Some of the music from the Broadway version are used in this movie as well.  It could be nostalgia speaking, but some of the singing just isn’t as good as the original movie. Seth Rogen comes to mind.  His vocal coach was Pharrell Williams and he admits that Pharrell had a tough time getting him to sing on key.  Another let-down is there is no “Hawaiian War Chant” scene in this remake.  It was deleted due to time constraints, according to Favreau, even though this remake is half an hour longer the original 1994 version.  Instead of the Hawaiian number, Timon starts to sing Be Our Guest from Beauty And The Beast.

Jeremy Irons expressed interest in playing Scar again, but he wasn’t selected. Surprisingly, Benedict Cumberbatch turned down the role!  Chiwetel Ejiofor was chosen and is an equally excellent actor.

This movie is almost a shot-for-shot remake, although several things have been changed from the original movie.  For example, the hyenas in the original movie are more comical, while the ones in this version are more serious and deadly. The hyena, Ed, has his name changed in this movie to the African name Azizi.  The song and scene “Be Prepared” was changed more for political reasons than anything else because of its original Nazi vibe.

A lot of audiences are asking one word: Why?  If this movie is almost the exact same thing as the 1994 version, why bother making another film?  The incredible photo-realism of the movie is what makes the film fresh, but not new.  It’s precisely because of that attempt to make the animals look so real that prevents the animals from showing emotion on their faces and strips the movie from pulling on the heartstrings.

If your kids have seen the animated version and you’re fine with it, then you’re safe to let them watch this version because it’s very similar.  The original is so much better though. If your kids haven’t seen it, introduce it to them.  Take time to chat with your kids about the powerful messages and symbolism in the movie.

Because our Heavenly Father is king, we can learn from the lessons about our royal nature and stepping up to be who we are meant to be.  We can easily be deceived and forget how special we truly are.  Rosemary M. Wixom gave a wonderful talk at the October 2015 General Women’s Session of Conference entitled, “Discovering the Divinity Within.”  She explained that we come to this earth to nurture and discover the seeds of divine nature that are within us.

Another powerful reminder in the movie is that our loved ones continue to live after they leave this mortal existence here on earth.  We can feel their influence and guidance as we look to the heavens.  Even better, because of the resurrection of Jesus Christ, we know we can see them again someday (Mosiah 16:7-8, 11).

Movie Review Mom:  Trina Boice teaches for BYU-I and is an author of 29 books.  You can read more of her reviews at www.MovieReviewMom.com  You can hear her podcast “Daily Inspirational Quotes Hosted by Trina” on Amazon Echo devices and Volley FM.  She has created several popular online courses at www.LifelongLearningEducation.com  Because she is a popular speaker in China and loves to travel around the world, she created www.EmptyNestTravelHacker.com  You can see all of her books and win prizes at www.TrinasBooks.com  You can also find @TrinaBoice on Facebook, Instagram, Pinterest, and Twitter.

While I agree this was amazing technology and thoughtful themes expressed this is not a kids movie. Stay with the earlier one for young children. It is very, very violent-more so than the original. Tender hearted little ones will likely have a hard time with this. This is so real that the violence is even worse. In the animated it was hard enough with Scar and Simba in slow motion. If you have children who deal with night mares this may not be for them.

Sadly, this reviewer missed the beauty behind Lion King. It's her opinion, however, and she's entitled to it, but for the many we know, including ourselves, the Lion King rings with great drama, compassion, magnificent cinematography, and a level of computer-aided technique that transcends anything produced by Disney thus far. Audiences are proving the critics wrong. It's a must-see that touches the heart and rekindles the beauty of the original. The two art-forms were not meant to clash with each other. The new generation of film production in this case is a true compliment to the original. Take with a grain of salt the negatives. See the movie, sit back and enjoy the talent of gifted souls who labor long and hard to entertain us. Disney accomplished it and then some.

By Benjamin Satterfield and Angel Lybbert

In This There Is Safety and Peace