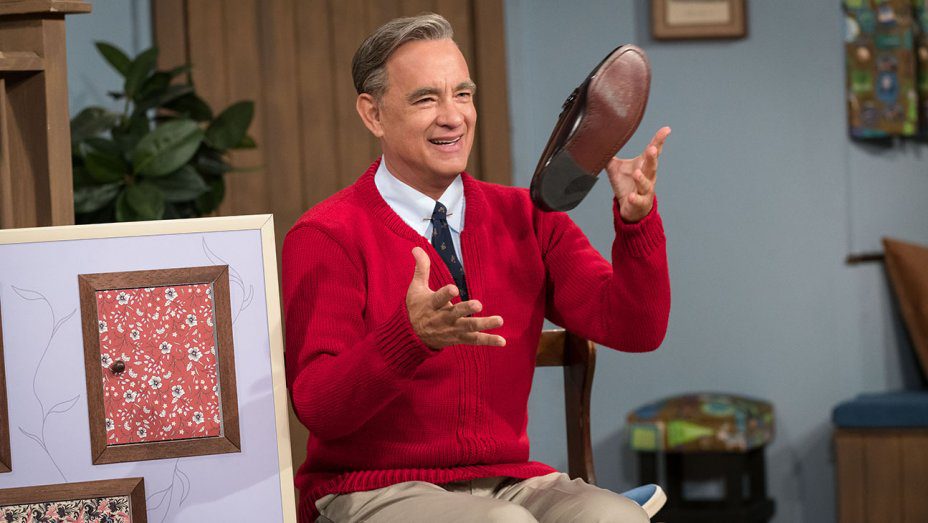 Latter-day Saint Movie Review: “A Beautiful Day in the Neighborhood” Will Make You Want to Be a Better Person

Directed by Marielle Heller, this dramatic and touching film is inspired by the life of Fred Rogers and his friendship with journalist Tom Junod.  Before seeing the movie, I thought it was going to be a biopic, but it’s not at all.  Mr. Rogers wouldn’t have wanted a movie to be about him anyway.  It’s actually based on an award-winning article in Esquire magazine in 1998 entitled “Can You Say Hero?”

When I was a little girl, I remember watching Mr. Rogers Neighborhood on TV and walking up to my TV to kiss Mr. Rogers on the screen.  He made me want to be a better little girl and I loved him for it.  What an extraordinary man he was.  This is one of those movies that will make you want to be better too.

The movie starts out exactly how you want it to with Mr. Rogers walking through that door, singing “It’s a Beautiful Day In The Neighborhood” while putting on that classic red sweater and switching out his footwear.  Joanne Rogers, wife of the late Fred Rogers, said that Academy Award winner Tom Hanks was the perfect actor to play her husband.   He exudes the warmth, authenticity, and kindness that Mr. Rogers did.  It turns out, they are actually sixth-cousins!  You even get to see the real Joanne Rogers in the movie during a scene filmed in a Chinese restaurant. She and the actor who played the original Mr. McFeely are shown as diners in the restaurant.

In the movie, Mr. Rogers explains that he always tried to talk to the camera as if he were looking just one child in the eyes so that it would be personal. Director Marielle Heller recreated that feeling in the Chinese restaurant scene where Tom Hanks looks straight at the camera at YOU.  It’s a really powerful scene, especially when he encourages Lloyd, the journalist, to think quietly about all of the who loved him into being.

It took a long time to write the movie because they wanted to ensure it was accurate. That is to say that the details of Mr. Rogers are accurate, but some of the details in Tom Junod’s life are not (he didn’t get into a fist fight with his father and his sister didn’t have a wedding.)  The rest of the talented cast includes Matthew Rhys, Chris Cooper, and Susan Kelechi Watson.  The puppets used are not the original, but special recreations made by the team at Sesame Street.

The perky piano music in Mr. Rogers’ old TV is still an element of this show, as well as more complicated piano pieces to accompany the drama.  The film seamlessly blends the real city streets with the ones from Mr. Rogers’ neighborhood.

There is an incredibly short, yet powerful, scene where Mr. Rogers kneels at his bed to pray with a notebook of all the names of people he wants to remember to pray for.  Some viewers may wish the movie included more about the life of Mr. Rogers; however, its message is the very essence of his life.  The story is both simple and profound.

Children who think the movie is about Mr. Rogers will be disappointed and probably a bit bored.  There is some serious cleavage in one scene and two men get in a bloody fist fight.  A bi-racial couple has discussions about daycare for their new baby. There are also several scenes of alcohol drinking. You see a man in a hospital bed after he collapses.