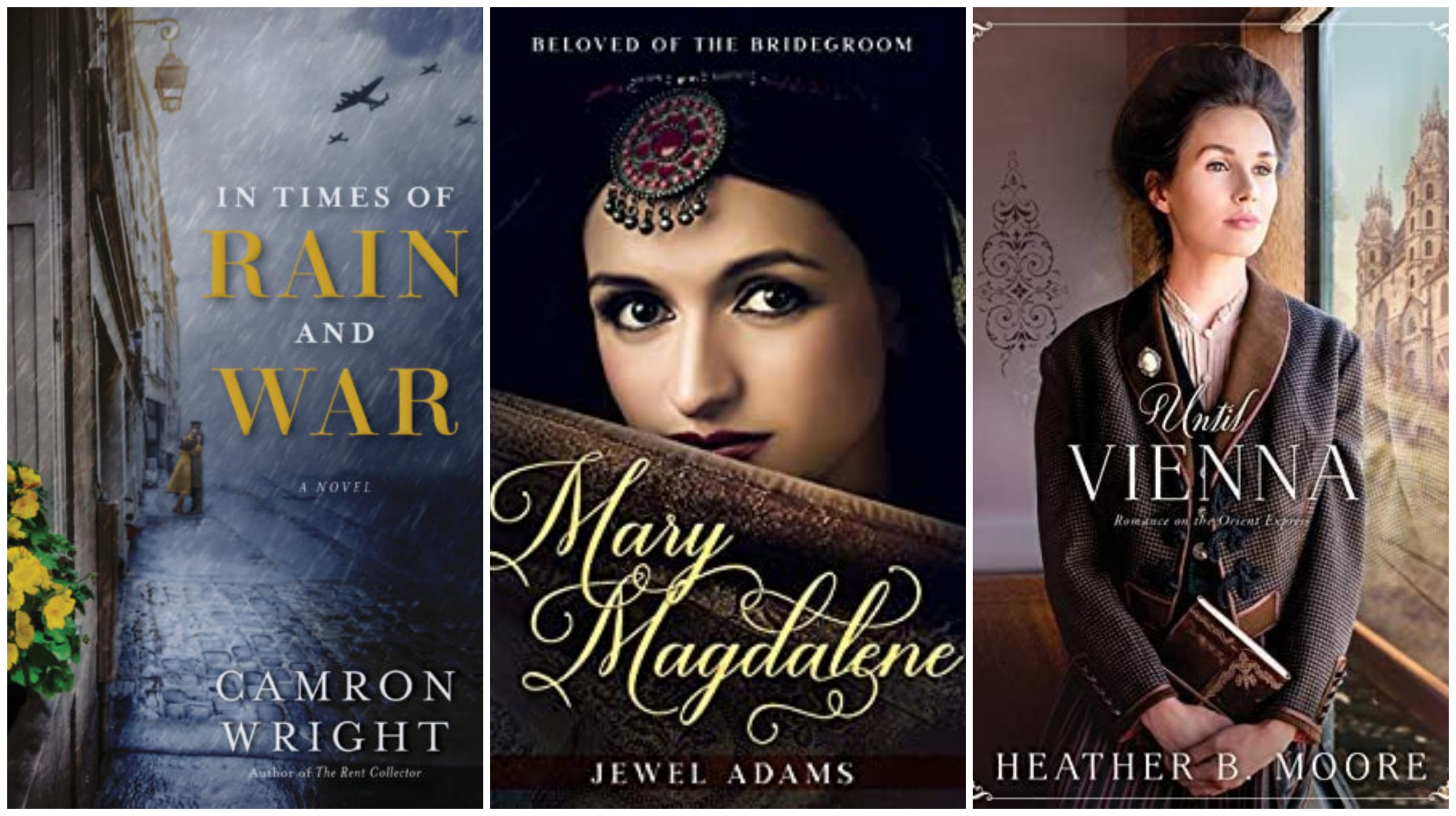 Three memorable new historical novels are introduced this month. In Times of Rain and War by Camron Wright takes us back to Germany and World War II. Mary Magdalene, Beloved of the Bridegroom introduces the reader to a strong conjecture concerning the life of Christ. Heather B. Moore completes the trio with Until Vienna, the third volume in the Romance on the Orient Express series.

IN TIMES OF RAIN AND WAR by Camron Wright

Camron Wright’s newest novel, Times of Rain and War, captures readers hearts and minds as thoroughly as his earlier books, The Rent Collector and The Orphan Train have. It’s the story of a young American soldier, Lieutenant Wesley Bowers sent to England to learn bomb disarmament with a British Bomb Disposal Company prior to America formally joining the war. He leaves behind a sweetheart he hopes return to and marry after the war. It’s also the story of Audrey Stocking, a young German girl hiding in London with her aunt Claire, a girl with even more secrets than she is aware of. She also suffers from debilitating panic attacks and dreams.

The two meet when a bomb lands on the building where Audrey and her aunt are living, but doesn’t explode. The team Wes is working with is called in to disarm the bomb and remove it. The attempt doesn’t go well and there is an explosion that destroys the apartment. Before fleeing the building Wes grabs a few items he thinks might be important to Audrey. Following the experience, the two become friends. Their friendship grows as she continues to work on the program to remove London’s children to safer locations in the country and he learns about and participates in removing and deactivating increasingly more complex bombs.

London is a dangerous place during the bombing blitz, but bombs aren’t the only danger for a German girl living there, who is also Jewish and the daughter of a bomb factory owner back in her native land.  A rigid program is in effect to root out spies and illegal refugees. Wes has his own problems dealing with extreme physical danger as well as anti-American bias by some of those he must work with.

Both Annie and Wes are strong characters readers will enjoy getting to know. Most of the secondary characters are also memorable and realistic. Only Major Leemon seemed a bit stereotyped to me. The background is handled well and the setting in bomb shattered London is accurate and gives a fresh perspective as seen from the various areas where unexploded bombs fall.

Camron Wright was born and raised in the Salt Lake City area and continues to live there with his wife and four children. He has earned top awards for his writing but has worked in other fields as well such as owning several retail stores and even once worked for the McCall Pattern Company. He has an MA degree from Westminster College in Salt Lake City.

IN TIMES OF RAIN AND WAR by Camron Wright, Published by Shadow Mountain, 320 pages, Hardcover $26.99.

MARY MAGDALENE, BELOVED OF THE BRIDEGROOM by Jewel Adams

Those who read and study the New Testament and seek answers to questions concerning the mortal life of Jesus are often left with questions. Members of the Church of Jesus Christ of Latter-day Saints were admonished years ago that there were “plain and precious truths” omitted from the book. In Mary Magdalene, Beloved of the Bridegroom Jewel Adams expresses some of the possibilities concerning those “missing parts” that “might have been” from her personal study, testimony, and familiarity with both Jewish law and the scriptures. She doesn’t claim her fictional story as scriptural truth, but puts it out there as a strong possibility and something to think about. She isn’t alone in the conclusions she’s drawn. Many scholars share those conclusions.

The story begins with a young girl, Mary who lives in Magdala. She is attacked one night as she walks home. Vicious rumors spread about her and she is shunned by the community and even her family. Her engagement is canceled and her hopes for the future are dashed. Only one friend stands by her. After years of isolation she meets Jesus who is about to begin his ministry. There is an immediate recognition between them as if they had known each other previously. One of the first miracles of his ministry occurs at their wedding. For three more years she follows him and his disciples as they travel across the Holy Land and following his death she is the first to see and speak with him after he leaves the tomb.

Here’s where I have always had a problem with the usual account of Jesus’s life. Jewish law at that time required any man who preached in their synagogues to be at least thirty years old and married. There is no mention in the New Testament of Him being denied the right to preach because of the lack of a wife. Neither is there a reference to his marriage. . . or is there? Why was Mary, Jesus’s mother, the one servers turned to because of a lack of wine at a Jewish wedding? Was she the hostess, the mother of the groom?

Adams’ writing is tender and respectful. The characters fit well with the scriptural accounts and the little we know of their personal lives. The story line follows the New Testament order of events and I found few instances where I questioned the possibility of her fictional account being closer to truth than can be proven by conventional means. This small book doesn’t delve into deep spiritual matters, but in its few pages gives the reader much to ponder, a sweet story, and encouragement to trust in the Lord.

Jewel Adams has been writing inspirational romance for over twenty years and has more than forty published works to her credit. She is a much sought after speaker for both youth and adult audiences. She is married and the mother of eight children.

MARY MAGDALENE, Beloved of the Bridegroom by Jewel Adams, Published by Jewel of the West Publishing, 84 pages, soft cover $6.99. Also available for eReaders.

UNTIL VIENNA by Heather B. Moore

Heather B. Moore is the latest author contributing to the Romance on the Orient Express series, a set of four romance novels set around 1900 featuring the famous luxury train that traveled across Europe at that time. Each book is a short novel of less than 200 pages. The first volume, It Started in Budapest was written by Julie Daines, the second, Wrong Train to Paris by Jennifer Moore, and the third, Until Vienna, is by Heather B. Moore. The fourth volume by Jen Geigle Johnson, Song of Salzburg, is scheduled for release in August. Though there are a few reoccurring threads through the stories, they are each a standalone tale and can be read in any order.

Until Vienna features Gigi, a young woman who has been disappointed in love and who isn’t looking for romance. Her main interest is clothing design. She works for an elite clothing shop where she designs and sews women’s fashions. Her aunt Rowena books her along with two other elderly ladies on an art tour of museums in each of the major cities where the Orient Express stops. The timing is inconvenient for Gigi, but arguing with Aunt Rowena is useless. Soon she finds herself aboard the luxurious train where she finds almost all of those on the tour are elderly except for the professor, Clyde Haskins, who leads the tour and lectures on the various art exhibits. She and the professor strike up a friendship, a friendship Aunt Rowena is determined should become much more than friendship. Will Aunt Rowena’s matchmaking efforts succeed?

This story is light and fun. Aunt Rowena is bossy, stubborn, and funny. She’s also tender-hearted and lovable. Both Gigi and Clyde are portrayed well. As are Gigi’s mother and sister. There’s also a mysterious dark haired man on the Express who has shown up in the two previous books. He adds a hint of mystery to the story.

Heather B. Moore is well known for writing with historical accuracy and bringing past events to life in today’s modern world. She is the recipient of numerous first place writing awards. She attended Cairo American College in Egypt and the Anglican School of Jerusalem in Israel. She earned a bachelor of science degree from Brigham Young University. She, her husband, and children live in Utah.

UNTIL VIENNA (Romance on the Orient Express) by Heather B. Moore, Published by Covenant Communications, Inc., 176  pages, soft cover $12.99. Also available for eReaders.