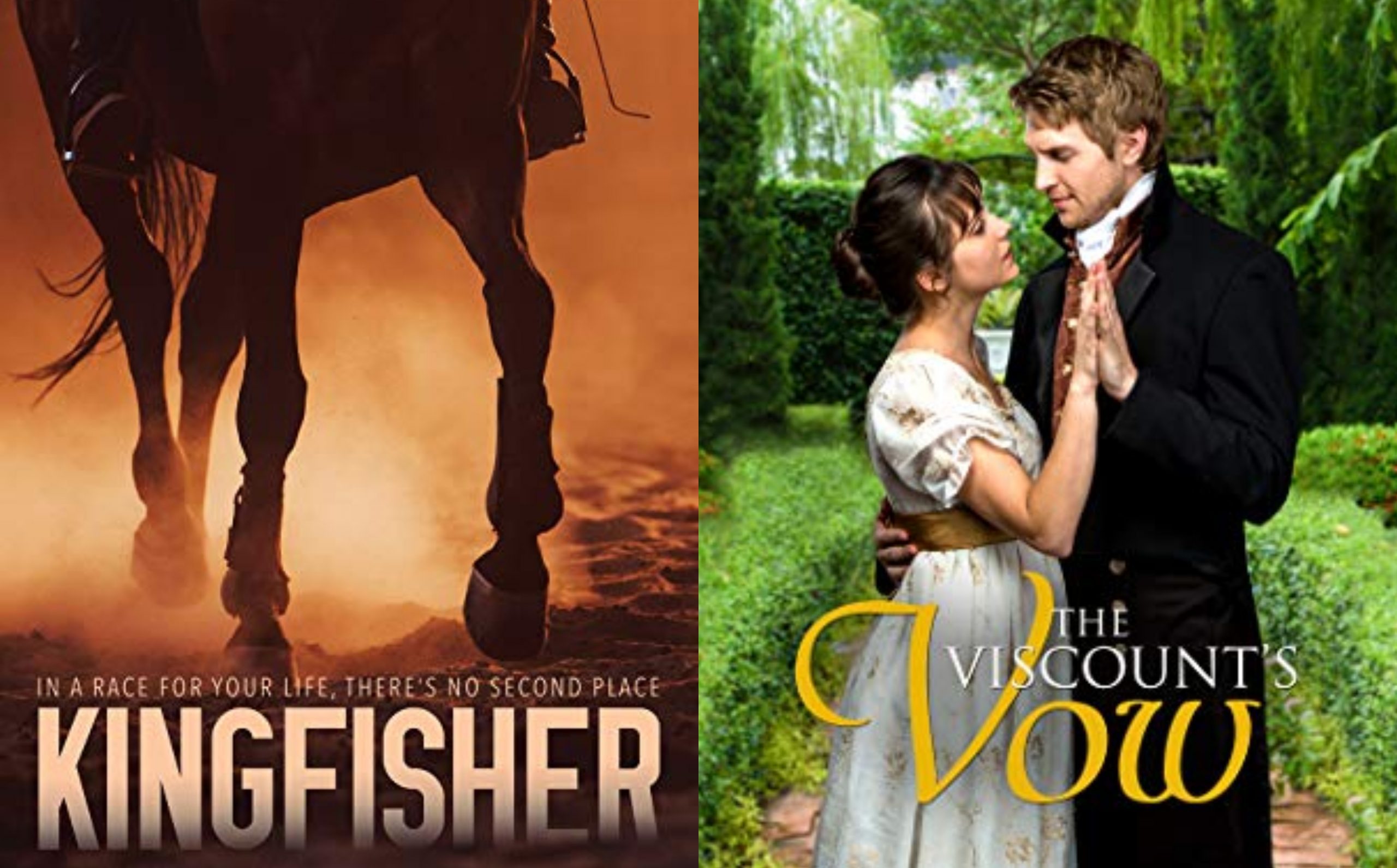 Two authors whose work I and many others enjoy a great deal, have new books out. Clair M. Poulson’s latest novel is Kingfisher which is set around a race horse of that name. Julie Coulter Bellon takes a problem, PTSD, which has received a lot of modern attention, back to a long ago war in The Viscount’s Vow. Both stories are reminders that people of all ages face similar problems and achieve growth as they deal with them.

Kingfisher is the name of a horse in Clair M. Poulson’s latest thriller by the same name. He’s not just any horse, but an exceptional race horse. The story begins with a horse race. Kit Trexler is both the owner and the jockey. He attempts to pass another horse and is met by an illegal maneuver that nearly forces him off the track and to lose precious time and the race. Unfortunately, the judges didn’t see what happened and the few witnesses are dismissed. While the winner, Sam Overmeyer, boasts and ridicules Kit, Kit struggles to not lose his temper. Shortly afterward someone kills Sam’s horse and Kit is accused of the deed. He and his twin sister, Paizlee, hire an attorney and a private investigator.

Sam isn’t content to beat Kit in a horse race, he wants revenge for every slight he ever experienced whether imaginary or real or if Kit is guilty or not. His cousin, Vince who is a police officer backs him up. Kit, who has been injured, hides his horse as Sam’s actions become more threatening and he tries to talk Paizlee out of taking his place riding Kingfisher in the next scheduled race. Paizlee refuses. Paizlee and the PI have become interested in each other and he, too, tries to convince her not to enter the race. When Sam and Vince’s actions land Kit in the hospital, his attorney’s part time assistant stays at his side. He is released in time to travel to California for the race, where all their lives are placed in jeopardy.

Poulson creates characters that seem so real, the reader may find him-or-herself trying to remember when and where they had known each other before. This is especially true for those with a rural or ranching background. This is a high action story, yet there is a psychological factor commonly seen in individuals who never learn to take responsibility for their actions. The setting is authentic ranch, racing world, and rural Western small town. The background experiences that led to the various characters present situations are presented well. I enjoyed this book a great deal and recommend it to anyone who enjoys action stories, modern Westerns, or Mystery/Suspense. There are even a couple of low key romances to spice up the deal.

Clair M. Poulson has published over forty novels and is a favorite author of  many readers who enjoy clean, high action mystery and suspense novels. His books usually have a western setting. He has a strong law enforcement background ranging from his military days as an MP to serving as a deputy, then sheriff, and now Justice Court Judge. He has also served on numerous state and federal law enforcement boards and councils. He has been equally involved in the Church of Jesus Christ  of Latter-day Saints, serving in numerous positions including Bishop. He and his wife, Ruth, are the parents of five adult children. He is still involved in ranching in the rural Utah community where they live.

Julie Coulter Bellon’s new book, The Viscount’s Vow, deals with the emotional damage faced by a returning soldier. Today we call it PTSD. Edward Rutledge returns home following his deployment in the Napoleonic wars to find his life changed. His father has passed away and he is now Viscount Carlisle. He is left with unresolved issues with his father, guilt for not being able to save his best friend, and doubts concerning his worthiness to marry the girl he has loved since they were children.

Charlotte has waited faithfully for Edward’s return. When she learns of his intention to break off their engagement, she is heartbroken, but refuses to accept that his feelings for her have changed. With understanding and love she sets out to win him back. Gradually he begins to see the possibility of their truly being together again. Then he learns the friend, Marcus, whom he believed died in his arms might actually still be alive. As he searches to confirm the possibility Marcus might be alive, he walks into danger that forces him to confront the demons that haunt him and recognize how deep his feelings for Charlotte are.

The Viscount’s Vow is a light, fun read, though it carries a deeper message concerning the lengths one might go to keep a vow or promise to a loved one. Though I prefer Bellon’s suspense novels in her various military series, I enjoyed this Regency tale. The characters are interesting and realistic. Because I have loved family members who suffered greatly following their deployments to Viet Nam, Iraq, and Afghanistan, I found Edward’s emotions on returning home from Spain believable. The author makes an interesting contrast in setting the deeply emotional problem amidst a frivolous Regency background.  In doing so she shows her characters to have greater depth than the balls, fancy gowns, and social class distinctions those things usually denote. At first the plot moves at a leisurely pace, then gradually quickens to a satisfying conclusion.

Julie Coulter Bellon was born and raised in Canada. She graduated from Brigham Young University, married an American, then settled down in Utah to raise their seven children. Her degree is in secondary education, but she has also taught at the college level. Nearly two dozen of her books have been published and she is the recipient of numerous awards.