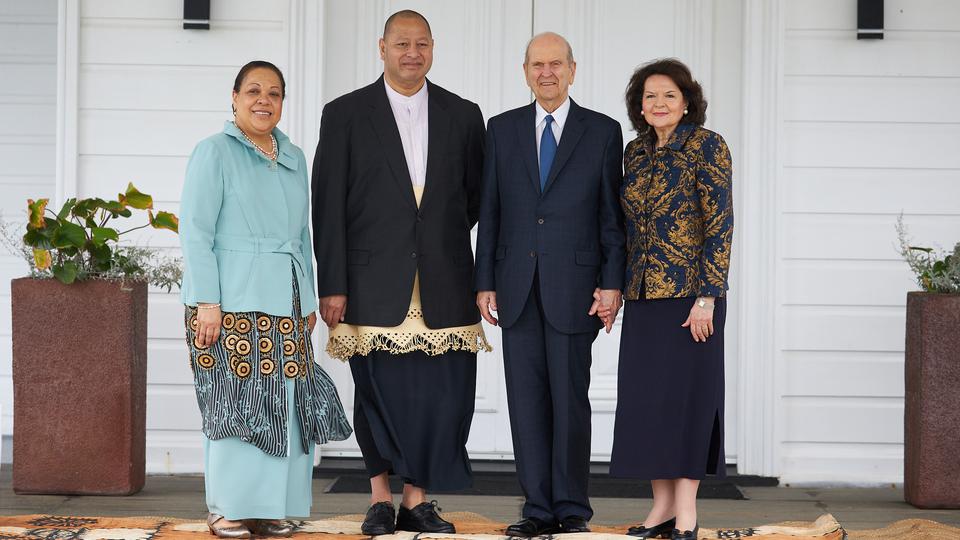 “You are precious to us and to the Lord. We love you. We miss you when we are away from you,” said President Russell M. Nelson of The Church of Jesus Christ of Latter-day Saints as he visited the Kingdom of Tonga during his nine-day Pacific ministry to seven countries. “[The Lord] has special feelings for the covenant people on the isles of the sea,” he said.

President Nelson arrived in Nuku‘alofa, Tonga’s capital, late Wednesday to minister to Latter-day Saints and to meet with government and interfaith leaders in the Pacific nation, where more than 60 percent of the population claims Church membership.

Following their visit with the king, President Nelson, Elder Gong and Elder Haleck spoke with members of Church media on the lawn outside the palace.

President Nelson said, “We spoke of our love for Tonga and the Tongan people, our gratitude for their freedom of religion. [King Tupou] stressed the importance of education and a healthy lifestyle.”

As an indication of the unusual access granted to the Church leaders, a palace official said it’s been more than a century since anyone not of royal blood has been given permission to be interviewed inside the gates of the royal palace.

President Nelson said they also spoke with the king about the importance of family. “[The king] understands … the significance of the family and God’s eternal plan. As we work for strong families, we will have strong nations in a kinder world.”

After meeting with the queen for nearly a half-hour, Sisters Nelson, Gong and Haleck met with Church media as well. Sister Nelson said, “How many days do you get to wake up and say, ‘I’m going to meet the queen today’?” She added, “[The queen] is everything and more than we could ever imagine. This is a woman of royal birth and born to change the world, I think. She’s going after the true men who are born to be true men, and [she] doesn’t want them being caught up in the world. This is a woman … who has a heart that’s focused on the people of Tonga and who has the ability to make a difference.”

At a devotional held on a breezy and rainy Wednesday evening at the Teufaiva Sports Stadium, thousands of Latter-day Saints listened to the Church leaders speak. The meeting was broadcast to more than 150 congregations in Tonga.

Nearly 66,000 members live in Tonga, the largest number of Latter-day Saints per capita of any nation in the world. The Nuku‘alofa Tonga Temple was dedicated in 1983. A second temple will be built in Neiafu.

President Nelson was sustained as the 17th president of the Church in January 2018. Since becoming the prophet, the global religious leader has traveled to six of the seven continents, excluding Antarctica, and to the Oceania geographic region to meet with Latter-day Saints, government and interfaith leaders, and the media.

Newsroom will add additional details of President Nelson’s visit to Tonga, including resources for news media.