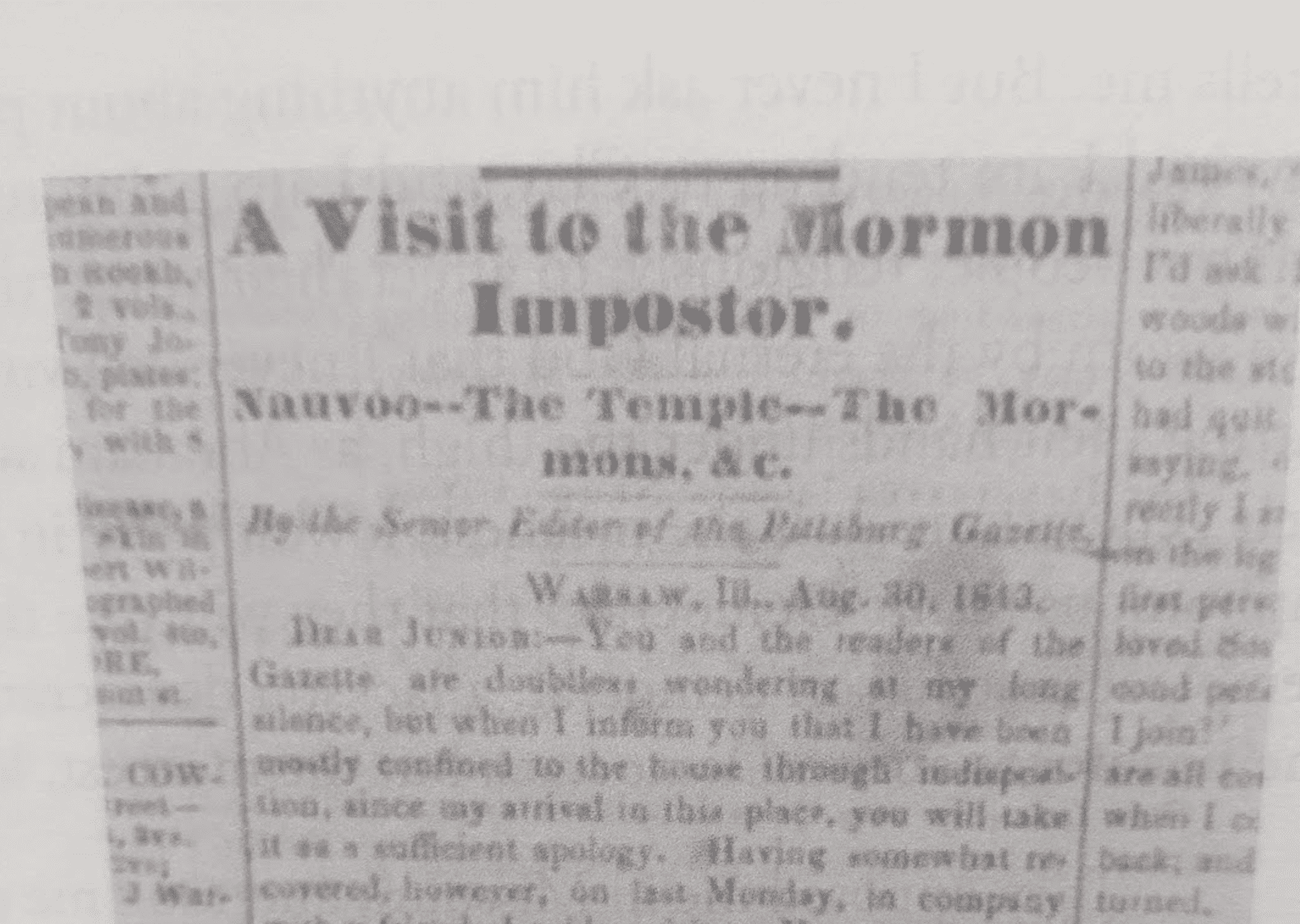 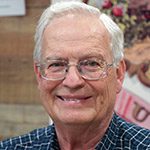 Joseph Smith Through the Lens of the “Pennsylvania Inquirer”

This year, as we remember and observe the 200th anniversary of the First Vision of Joseph Smith,  I thought it might be timely to share one of the prophet’s last interviews on the First Vision. It is taken from an original copy of the “Pennsylvania Inquirer” of October 5, 1843, from in our collection.  This was an article written by David Nye White (1805-1888), reprinted from the “Pittsburg Gazette”, of which he was the editor, after he left his paper with a reporter to interview the Prophet in Nauvoo, Illinois and wrote of the interview on August 30, 1843 from Warsaw, Illinois.

Newspaper editors in major cities, such as Pittsburg, almost never left their jobs to a junior editor to personally travel to get an interview in that day. As such, this interview is quite impressive.  The fact that White took a cub reporter with him to take down every word of Joseph Smith, as well as the heading of his article; “A Visit to the Mormon Imposter”, leads us to imagine he had perhaps heard of Joseph’s aim to run for President of the United States the following year. He seemingly felt it was presumptuous of him and wanted to catch him with some phrase or quotation which would show him to be the “imposter” he thought he was at the outset.

White writes to his Junior Editor back at the paper in Pittsburg, telling him he had not heard from him sooner due to illness while at Warsaw, Illinois, and then proceeds to describe his trip to Nauvoo and ensuing interview with Joseph Smith.  He repeatedly attacks Joseph and his people in the article, but had the integrity to bring a reporter who quotes every word of the Prophet, who clearly understood White’s intentions during the interview.  Please follow in particular the quoted words of Joseph:

“The next morning, after breakfast, we paid a visit to the prophet.  We were received in a common sitting room, very plainly furnished, where the prophet and older members of the family had just been breakfasting (the editor’s $.25 word!), and his numerous children and dependents were then sitting at the table.  He received us in quite a [good] humored, friendly manner, asked us to sit down, and said he hoped for a better acquaintance.  On the gentleman (the reporter) who accompanied me asking him how he prospered, he replied, ‘None can get ahead of me, and few can keep behind me.’  He seemed to think he had said something very witty, for he laughed very heartily.  We spent about an hour conversing on various subjects, the prophet himself, with amazing volubility, occupying the most of the time, and his whole theme was himself.  Let us give what turn we would to the conversation, he would adroitly bring it back to himself,  The gentleman who accompanied me is a strong Whig, and as the Mormon vote had been given at the recent election the Locofoco (Democrat) candidate for Congress, thereby defeating Cyrus Walker, Esq., Whig, who had defended ‘Joe’ in several lawsuits with the Missourians, the conversation took a political turn at first.  ‘Joe’ professed to be a great friend to Mr. Walker, and said he had voted for him, but would not interfere with his people in the matter.

He said he had never asked the Lord anything about politics; if he had done so, the Lord would have told him what to do. ‘The Lord,’ said he, ‘has promised to give us wisdom, and when I lack wisdom I ask the Lord, and he tells me…. But I never ask him anything about politics.  I am a Whig, and I am a (Henry) Clay man.  I am made of Clay, and I am tending to Clay, and I am going to vote for Henry Clay; that’s the way I feel.  But I won’t interfere with my people, religiously, to affect their votes, though I might to elect Clay, for he ought to be President.  I have sworn by the eternal God that I never will vote for a Democrat again; and I intend to swear my children, putting their hands under the thigh, as Abraham swore Isaac, that they will never vote a Democrat ticket in all their generations.  It is the meanest, lowest party in all creation.  There is five-sixth of my people so led away by the euphonious term “Democrat,’ that they will vote the Locofoco ticket.  I am a Democrat myself.  I am a Washington democrat, a Jefferson democrat, and I voted for Harrison, and I am going to vote for Clay.  But the Locofocos are no Democrats, but the meanest, lowest, most tyrannical beings in the world.

They opposed me in Missouri, and took me prisoner, and were going to shoot me for treason, and i never had committed any treason whatever.  I never had anything bigger than a jack-knife about me, and they took me a prisoner of war, and had twenty men to guard me,  I had nothing to do with fighting.  Our men, six hundred strong, were in arms under Col. (George M.) Hinkle.  When the Missourians came marching up.  Col. Hinkle ordered us to retreat, when I lifted up my hand, and said, ‘Boys, I think we won’t go yet, we’ll stand our ground,’ and they stood firm, but Col. Hinkle run like the devil.  For doing this, they charged me with treason.’

Speaking of revelations, he stated that when he was in a ‘quandary,’ he asked the Lord for a revelation, and when he could not get it, he ‘followed the dictates of his own judgment, which were as good as a revelation to him; but he never gave anything to his people as revelation, unless it was a revelation, and (he said) the Lord did reveal himself to him.’  ‘…The Lord does reveal himself to me.  I know it.  He revealed himself to me first when I was about fourteen years old, a mere boy.  I will tell you about it.  There was a reformation among the different religious denominations in the neighborhood where I lived, and I became serious, and was desirous to know what Church to join.  While thinking of this matter, I opened the Testament promiscuously on these words in James, ‘Ask of the Lord, who giveth to all men liberally and upbraideth not.’  I just determined I’d ask him.  I immediately went out into the woods where my father had a clearing, and went to the stump where I had stuck my axe when I had quit work, and kneeled down, and prayed, saying, ‘O Lord, what Church shall I join?’  Directly I saw a light, and then a glorious personage in the light, and then another personage, and the first personage said to the second, ‘Behold my beloved Son–hear him.’ I then addressed this second person, saying, ‘O Lord what Church shall I join’  He replied, ‘Don’t join any of them, they are all corrupt.’  The vision then vanished, and when I come to myself, I was sprawling on my back; and it was sometime before my strength returned.  When I went home and told the people that I had a revelation, and that all the churches were corrupt, they persecuted me, and they have persecuted me ever since. They thought to put me down, but they haven’t succeeded, and they can’t do it.  When I have proved that i am right, and can get all the world subdued under me, I think I shall deserve something.

My revelations have proved to be true, because they have been delivered before they came to pass, and they came to pass exactly.  I had a revelation in Missouri which was fulfilled to the letter.  The Missourians had got us all prisoners, and were threatening to kill us.  The principal men of us were lying under a log, with a guard standing around us in the night.  I fell into a trance.   I call it a trance.  I heard a voice which said, ‘Joseph, fear not, you and all your friends shall be delivered without harm, and shall yet stand upon the hills of Zion.’  When i awoke out of the trance, I aroused Elder Rigdon, who was by the side of me, and said, I have a revelation, we shall all escape.  Elder Rigdon shouted, and told to the next one, and in the morning it was told to my family and all our friends, and they all rejoice.  That revelation came to pass, although they were holding a council at the time I had the trance, and had resolved to kill me, they can’t harm me.

I told my family lately, before I left home for Dixon (where he was kidnapped by Missourians disguised as Church missionaries) that if I was taken up the Lord would deliver me, didn’t I Emma–(appealing to his wife, who was standing behind his chair, playing with his hair, and who answered in the affirmative)–and when they took me I was passive in their hands, and the Lord compelled them to bring me right to Nauvoo.  They couldn’t help themselves, although they gnashed their teeth with rage.’

Speaking of the temple, which he is erecting, he said, ‘I don’t know how the world will like it; it suits me; I have no book learning; I’m not capacitated to build according to the world, I know nothing about architecture, and all that, but it pleases me; that’s the way I feel.”

Far from the intended tripping up of Joseph Smith, he responded honestly and forthrightly to White’s interview, which because of the reporter’s quotations, gives us an insight into Joseph’s personality and character as the Lord’s True Prophet.

That sums up what the Democrats are like today! Thank you Joseph for your insight to them