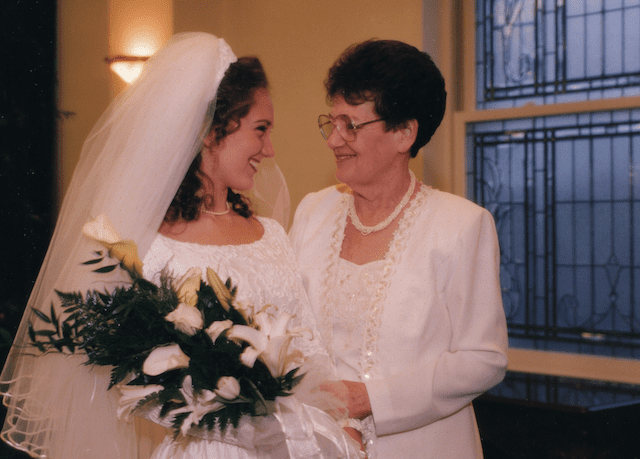 America’s Violinist, Jenny Oaks Baker, is a Grammy-Nominated, Billboard No. 1 performer and recording artist. She received her Master of Music degree from the renowned Juilliard School in New York City and her Bachelor’s degree in violin performance from the Curtis Institute of Music in Philadelphia. She is the daughter of President Dallin H. Oaks of the First Presidency of the Church of Jesus Christ of Latter-day Saints.

“I don’t talk about her death very often because it’s so hard,” Jenny Oaks Baker said through tears. “It’s been 21 years. It’s crazy that it’s still so hard.”

In the whirlwind of meeting and marrying her husband, moving across the country and starting her graduate program at Julliard, Jenny also faced the difficult fact that she was only 22 and her mom was dying of cancer.

Her mother, June Dixon Oaks, was diagnosed with pancreatic cancer in July of 1997, and while June prayed for her own health, her most fervent prayer was that Jenny, her youngest daughter—the baby by 13 years—would find someone to marry. June wanted to ensure that Jenny was taken care of if the cancer took her.

A month after she received this daunting news, Jenny left home to begin her Masters at the Juilliard School in New York City. She went with pangs, not knowing how long her mom had to live, but knowing she was supposed to be in New York. June encouraged her to go and spread her wings.

The Oaks family decided to fast for their mom’s health on one of Jenny’s first Sundays attending the Manhattan Single’s Ward. In the midst of this fervent exercise of family faith, it was June’s deepest prayer that was answered—Jenny met her husband that very day.

As Jenny stood at the door of the chapel passing out programs and scoping out which guy she could sit by, she looked around the room, and her eyes met Matt Baker’s. He was already sitting on a bench, and between the time they saw each other and when she went to sit next to him, another guy had taken the seat next to Matt. Owning her lack of subtly, she climbed over both guys to sit in the middle of the bench next to Matt.

Matt took the obvious hint and started talking to Jenny as the meeting began. He told her he was in town for a week doing job interviews for a job after his graduation from Utah State University. He pulled out all of the church cards he could in an earnest attempt to impress her.

“My father has been a bishop and a stake president, and in fact, now he is a mission president,” Matt said.

Jenny looked at him with a twinkle in her eye, and though she didn’t want to deter Matt’s attempts to impress said “My dad’s an apostle,” showing him the scriptures in her hands then Elder Oaks had given her with his name on them.

Instead of feeling intimidated, Matt went home to Utah and a few weeks later called Elder Oaks to tell him he was in love with his daughter, he wanted to marry her, and he wanted to meet him.

Elder Oaks was a little hesitant because Jenny had been a little “fickle” and “boy crazy” in her younger years, but as soon as June met Matt, she fell in love. With June being bedridden, Elder Oaks, even with all of his responsibilities and busy schedule as an apostle, acted the part of a gracious host and made Matt a sandwich.

“My dad, he’s so sweet, made Matt a sandwich on moldy bread. My dad was doing the best he could trying to manage everything. He probably didn’t care that the bread was moldy, but he didn’t realize that some people might not want a moldy sandwich,” Jenny said. Matt, again, was undeterred (and ate the sandwich anyway). His confident step to meet the Elder and Sister Oaks allowed him time to build a relationship with June in the last few months of her life.

By Thanksgiving, Jenny and Matt were engaged, and they got to spend their last Christmas with June. “[It was] a pretty significant Christmas—new beginnings and sad farewells. I said goodbye to my mom at the same time as I was gaining a new mother-in-law, a new family, a new husband. It was a bittersweet holiday. It was a beautiful time of my mom’s prayers being answered that I would be taken care of before she died.”

Jenny and Matt also got to visit his parents, Maurice and Laura Baker, in Albuquerque on their mission, and with Jenny’s mom close to passing away, Matt’s mom Laura immediately stepped up to be a mother figure in her life. “I even asked my mom if I could call Matt’s mom “Mom”, and my mom gave me that permission. I didn’t want her to feel like I was replacing her because she was dying, but my mom wanted me to have another mother-daughter relationship. I’m grateful.”

Soon after Christmas, the Oaks family found out June was not going to survive the cancer. Jenny and Matt decided to push their wedding date up from August to March, so June could be there.

June hardly left the house the entire year she was sick. She went to doctor’s appointments, helped Jenny get sheets for her dorm room at Juilliard, and went to the wedding. She did not have the strength to go to Jenny’s endowment. The doctors scheduled her chemotherapy so she could feel a little better on Jenny’s wedding day, but her immune system was so fragile that they only had a small reception. But having her mom there was worth any change of plans.

“Being about to lose a loved one is great temple prep,” Jenny said. “It’s honestly really good wedding prep as well because it keeps you grounded with what is most important. I wasn’t concerned about colors or what kind of flowers. It was all about the temple and life and eternity and family. And that’s kind of a sweet place. It’s hard to be losing a loved one, but it definitely prepares you to make covenants in the temple and to be in a good, humble place with the Lord before you make those covenants with [Him].”

Though June did not feel physically well on Jenny’s wedding day, she was grateful her prayers for Jenny had been answered.

Jenny was able to spend a month with her mom taking care of her before June passed away in July. A week before June died, they went out to get her new glasses because her eyes had changed so much and they didn’t know she was going to die so soon. As they walked into the old ZCMI Center, they passed the old Deseret Book, and there in the window was Jenny’s first album. Jenny was so grateful her mom got to see that before she died.

In those last days, Jenny played many primary songs on her violin for her mother. Those songs became the foundation for her second album, “Songs My Mother Taught Me”, dedicated to her mom.

Though she died earlier than Jenny would have ever wanted, the example of her mother’s prayers and testimony of the Savior continues to permeate her music and life.

What a touching and inspiring story. Thanks for sharing.

I just have to thank you for this article. Elder and Sister Oaks and Jenny came down to see the Shakespearean Festival plays and attended our ward on a Sunday many years ago. Our daughter taught Primary and had Jenny in her class. June and I talked about Jenny and her violin teacher. June said that she was a very demanding teacher and Jenny wanted to quit. I told her, "Don't let her!" We had a nice conversation about our husbands' white shirts - she telling me that sometimes she just ironed the part that showed and I told her my husband had a shirt on without the top button and he was officiating for sacrament meeting. We laughed together. Thanks for sharing this article!