Is There Evidence for Highways in Ancient America? | Meridian Magazine 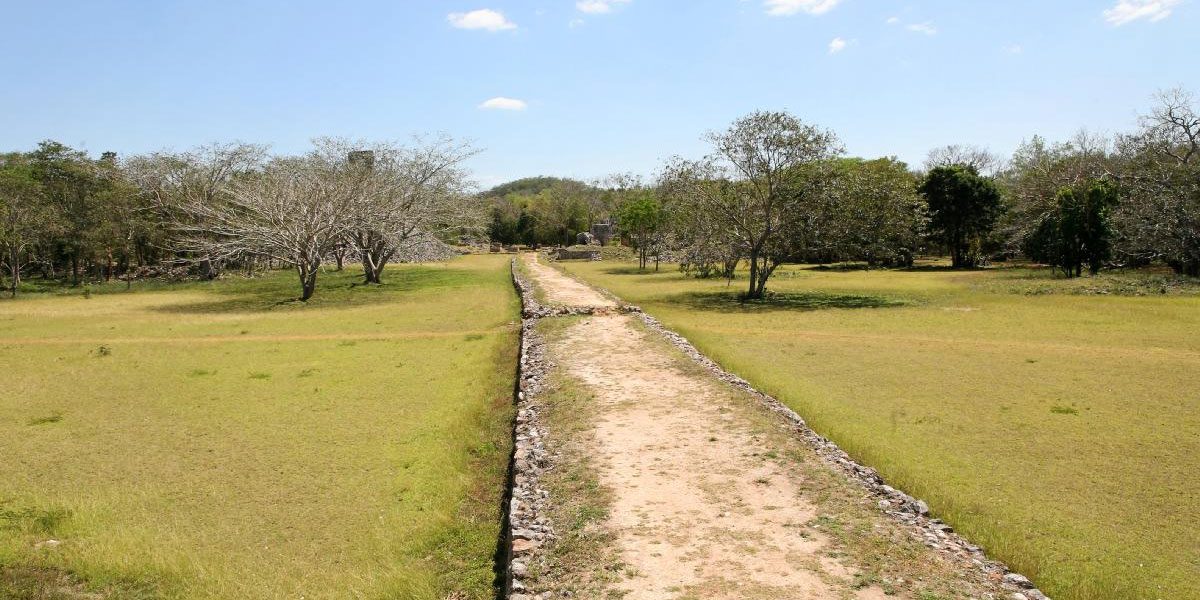 Is There Evidence for Highways in Ancient America?

“And there were many highways cast up, and many roads made, which led from city to city, and from land to land, and from place to place.”
3 Nephi 6:8

When abridging the record of 3 Nephi, Mormon reported on several civic-related building projects that occurred during a period of “great peace in the land” (3 Nephi 6:6). Along with the building of new cities and the repairing of old ones (v. 7), “there were many highways cast up, and many roads made, which led from city to city, and from land to land, and from place to place” (v. 8). Even after falling into disuse and disrepair, prominent highways often leave behind a large amount of non-perishable material. For this reason, readers may wonder if the remains of any ancient highways have been found in the Americas.

Notable systems of highways were indeed constructed by several ancient American societies,[1]and their remains have long been studied by archaeologists.[2]The ancient Maya, in particular, constructed and used highways (also known as causeways or sacbeob) in a manner that fits several details from the Book of Mormon. Concerning the features of these highways, Mesoamerican scholar Mark Wright has explained,

Although they varied in height and width, their construction was generally composed of rubble lined with large stones at the edges and large cobblestones in the interior, progressively getting smaller from bottom to top, finally gradating to fine gravel near the surface and topped with fine powdered limestone (called sascab), which was pressed smooth with stone rollers.[3]

The “66 feet (20 m) wide and up to 7 feet (2 m) high” road at Dzibilchaltun in the lowland Maya area was constructed in such a manner and dates close to the time when major networks of highway were being built in the Book of Mormon.[4]Commenting upon this and similar structures, anthropologist John L. Sorenson remarked that such “massive construction surely qualifies as ‘cast up’,” as mentioned in 3 Nephi 6:8.[5]

Figure 2A pyramid from el Mirador. Photo by Geoff Gallice via Wikimedia Commons

Ancient Maya roads were often used to connect major districts or building complexes within sprawling cities. Metropolises like El Mirador, which thrived during Book of Mormon times, had numerous causeways that branched out from the city center like spokes on a wheel.[6]It’s possible that the “highway which led to the chief market” near Nephi’s garden tower was this type of major thoroughfare (Helaman 7:10).[7] Major sites had dozens of such roads. For instance, more than 80 causeways have been documented at Chichen Itza alone.[8]

In addition to inner-city causeways, longer highways connected main city centers with outlying satellite communities. Some, like the 62 mile (100 km) Coba Yaxuna sacbe,[9] even spanned dozens of miles to reach other independent cities or settlements. These findings are consistent with statements in the Book of Mormon about the construction of “manyhighways … which led from city to city, and from land to land, and from place to place” (3 Nephi 6:8; emphasis added).[10]

Also of interest is that, according to Anthropologist Justine M. Shaw, “Nearly all Maya causeways are straight” and “even when features of moderate size lie in the projected path of a sacbe, every effort is made to maintain the same line, even to the point of covering earlier constructions.”[11] If Nephite highways adhered to this type of rigidly straight alignment, the resulting imagery would have nicely reinforced Alma’s message to the people of Gideon:

Although hundreds of miles of these ancient “cast up” roads have been identified and studied throughout Mesoamerica,[13] a laser technology known as LiDAR has recently revealed previously unknown networks of highways.[14] This development shows just how easy it is for even prominent structures to go undetected beneath the dense jungle foliage in Mesoamerica.[15] It also suggests that many more miles of ancient highways are just waiting to be discovered under the forest canopy.

Most societies today value highways for their utility in transporting people and goods. Although the ancient Maya certainly used highways for these purposes, the primary reasons for their construction were likely political and religious in nature. [16]Shaw has suggested that highways offered “unique physical, symbolic, cosmological, social, and political ties” for the kin-based rulers who were most likely responsible for their construction. [17]She further pointed out that their “most likely intended purpose may be that of religion, most specifically for processions.” [18]

This point is fascinating considering that King Lamoni seems to have planned a stately procession before his conversion. In Alma 18:9 readers learn that Lamoni “had commanded his servants … that they should prepare his horses and chariots, and conduct him forth to the land of Nephi; for there had been a great feast appointed at the land of Nephi, by the father of Lamoni, who was king over all the land.” [19]If the Lamanites had built up prominent highways, Lamoni and his retinue of servants may have intended to use them for ceremonial purposes on their way to a politically, and possibly religiously, significant feast. [20]

With these details in mind, it is possible that the Nephites and Lamanites viewed highways much like the ancient Maya did—as symbolic “physical devices through which powerful forces flowed to connect material spaces and the peoples who populated them.” [21]If so, this may actually help explain why the construction of major highways was mentioned in the Book of Mormon in the first place.

In Helaman 14:24, Samuel the Lamanite prophesied that “many highways shall be broken up” as a sign of Christ’s death. Mormon, always attentive to the fulfillment of prophecy, then mentioned the major construction of highways in 3 Nephi 6:8, as well as the fulfillment of Samuel’s prophecy only two chapters later: “And the highways were broken up, and the level roads were spoiled, and many smooth places became rough” (3 Nephi 8:13).

If highways were seen as symbols of political and spiritual power that connected rulers and peoples together, then their destruction may have represented the severing of this power, as well as the breakdown of their society (see 3 Nephi 7:2). In turn, this haunting imagery, derived from the aftermath of major natural disasters, [22]set the stage for Christ’s unifying ministry (see 4 Nephi 1:17). [23]With these possibilities in mind, Mormon’s emphasis on the construction of highways in 3 Nephi 6:8seems to be more than mere happenstance. It subtly sets up the fulfillment of Samuel’s prophecy, while at the same time conveying a symbolic message that makes especially good sense in a Mesoamerican context.

It may be impossible to know whether or not the Nephites or Lamanites built or used any of the known ancient highways in Mesoamerica. Yet the physical forms and symbolic functions of these highways are remarkably consistent with what is described in the Book of Mormon. At the same time, they are not a feature of ancient American societies that was well-known or expected at the time of the Book of Mormon’s translation.[24]For these reasons, the remnants of ancient American highways offer another intriguing evidence for the authenticity of the Book of Mormon.

“4 Ways the New Maya Discoveries May Relate to the Book of Mormon,” Book of Mormon Central Blog, February 5, 2018, online at bookofmormoncentral.org.

Mark Alan Wright, “The Cultural Tapestry of Mesoamerica,” Journal of the Book of Mormon and Other Restoration Scripture22, no. 2 (2013): 4–21.

[10]Mormon’s three-fold poetic description of highways and roads leading from (1) “city to city,” (2) “land to land,” and (3) “place to place” is interesting because Shaw has argued that the ancient Maya seemed to have grouped their roads into three major categories: (1) local intrasite,  (2) core–outlier intrasite, and (3) intersite. See Shaw, “Maya Sacbeob,” 262. Although it is uncertain, it’s possible that Mormon’s description of “place to place” refers to the “local intrasite” roads, that “land to land” refers to “intersite” roads, and that “city to city” is a description of “core–outlier intrasite” roads. Shaw explained that his “proposed groupings appear to have been a reality for the Lowland Maya. Although I do not insist that the Maya themselves would have classified Sacbeobin this manner, and I realize that the measurements and sample are a product of archaeologists’ foci, the divisions are apparently related to something in the real world. The groups are possibly related to the distance normally walked by site inhabitants in a day, the length easily traversed by participants in a ritual, or the span over which political control may have been exerted and maintained under certain conditions” (p. 266). Support for the idea that the Nephites at least conceived of one of these categories (a day’s journey) comes from Helaman 4:7: “And there they did fortify against the Lamanites, from the west sea, even unto the east; it being a day’s journeyfor a Nephite, on the line which they had fortified and stationed their armies to defend their north country” (emphasis added).

[12]This passage is interesting because it is the only symbolic path in the Book of Mormon that is certainly described as being “straight” (meaning not crooked) instead of “strait” (meaning narrow). All other instances of “strai[gh]t” paths are more ambiguous. See Paul Y. Hoskisson, “Straightening Things Out: The Use of Strait and Straight in the Book of Mormon,” Journal of Book of Mormon Studies12, no. 2 (2003): 62; Book of Mormon Central, “Is the Path to Eternal Life ‘Strait’ or ‘Straight’?(1 Nephi 8:20),” KnoWhy456 (August 7, 2018).

[13]See Sorenson, Mormon’s Codex, 356–357: “Roads were made and used for at least 2,500 years before the Spanish conquest, beginning with the Olmec people at San Lorenzo. Hundreds of miles of them have now been discovered in locations ranging from the state of Zacatecas on the north to Yucatan and Atlantic Guatemala on the south.”

[20]For evidence that feasts in ancient Mesoamerican societies held both religious and political significance, see Lisa J. LeCount, “Like Water for Chocolate: Feasting and Political Ritual among the Late Classic Maya at Xunantunich, Belize,” American Anthropologist, New Series 103, no. 4 (2001): 935–953; Keith Eppich, “Feast and Sacrifice at El Perú-Waka’: The N14-2 Deposit as Dedication,” The PARI Journal10, no. 2 (Fall 2009):1–19. Although it is impossible to know if the Lamanites held religious feasts, there is good evidence that the Nephites observed the holy days of their Israelite tradition. See Book of Mormon Central, “Did the Nephites Have a ‘Holiday Season’ Like We Do Today?(Mosiah 2:4),” KnoWhy 394 (December 28, 2017); Book of Mormon Central, “Did Jacob Refer to Ancient Israelite Autumn Festivals?(2 Nephi 6:4),” KnoWhy32 (February 12, 2016).

[24]It’s likely that ancient American highways were first brought to the attention of the American public by John Lloyed Stephens and Frederick Catherwood more than 10 years after the publication of the Book of Mormon. Among the many roads discussed in his travels, Stephens mentioned “a great paved way, made of pure white stone, called in the Maya language Sacbé, leading from Kabah to Uxmal, on which the lords of those places sent messengers to and fro, bearing letters written on the leaves and bark of trees.” John L. Stephens, Incidents of Travel in Yucatan, 2 vols. (New York, NY: Harper and Brothers, 1843), 1:415. See also, John E. Clark, Wade Ardern, and Matthew Roper, “Debating the Foundations of Mormonism: The Book of Mormon and Archaeology,” 2005 FairMormon conference presentation, online at fairmormon.org.

I have been down to Mes-America several times to view the ruins. We have walker their highways to get from site to site. They are well built and a great help to get around. As we walked from site to site, the Book of Mormon came alive for us.