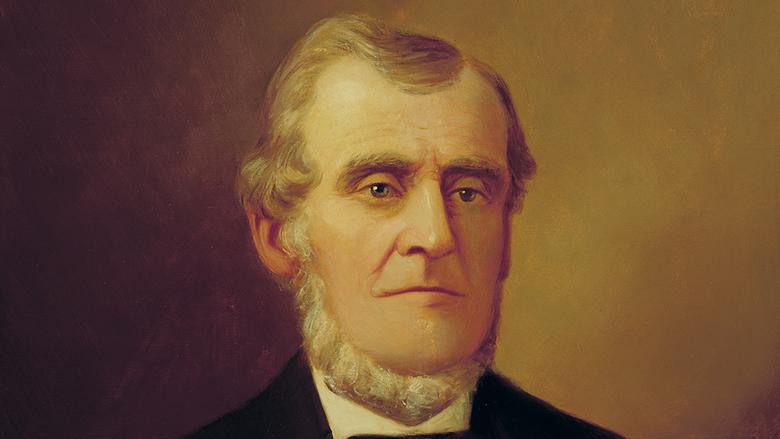 According to Edward Stevenson, Martin Harris told him the following story from the several decades that Harris spent pretty much completely estranged from the Church of Jesus Christ of Latter-day Saints and its leadership:

On one occasion several of his old acquaintances made an effort to get him tipsy by treating him to some wine.  When they thought he was in a good mood for talk, they put the question very carefully to him:  “Well, now, Martin, we want you to be frank and candid with us in regard to this story of your seeing an angel and the golden plates of the Book of Mormon that are so much talked about.  We have always taken you to be an honest, good farmer and neighbor of ours, but could not believe that you ever did see an angel.  Now Martin, do you really believe that you did see an angel when you were awake?”  No, said Martin, I do not believe it.  The anticipation of the delighted crowd at this exclamation may be imagined.  But soon a different feeling prevailed when Martin Harris, true to his trust, said, “Gentlemen, what I have said is true, from the fact that my belief is swallowed up in knowledge; for I want to say to you that as the Lord lives I do know that I stood with the Prophet Joseph Smith in the presence of the angel, and it was in the brightness of day.”  (422)

Martin Harris was the only witness of the Book of Mormon to enter the Salt Lake Valley, doing so in August 1870.  “Martin had become the only one of the Three Witnesses or any of the Eight Witnesses to personally observe the growth of the Church in the West” (440, compare 429).  Martin Henderson Harris, son of Martin’s brother Emer, recorded the following in his reminiscences:

Uncle Martin arrived at Ogden [Utah] on his way from Kirtland [Ohio] at his former residence to Salt Lake City and staid over night and bore his testimony to the neighbors. . . .  Leander [Leander Sargent Harris, son of Martin Henderson Harris] was one that remembers his testimony which was related on that occasion.  (cited at 428)

George Q. Cannon, editor of the Deseret Evening News, wrote in that newspaper upon Martin’s arrival in Utah that Martin Harris “has never failed to bear testimony to the divine authenticity of the Book of Mormon.  He says it is not a matter of belief on his part, but of knowledge” (429-430).  Wilford Woodruff recorded in his journal a regular Sunday morning meeting in the Salt Lake Tabernacle on 4 September 1870:

Only very small segments of Martin’s actual testimony seem to have been recorded by various individuals on the occasion of that 10:00 a.m. meeting.  His remarks were apparently brief and centered almost exclusively on a strong testimony of the Book of Mormon.  (431)