I Carved Until I Set Him Free | Meridian Magazine 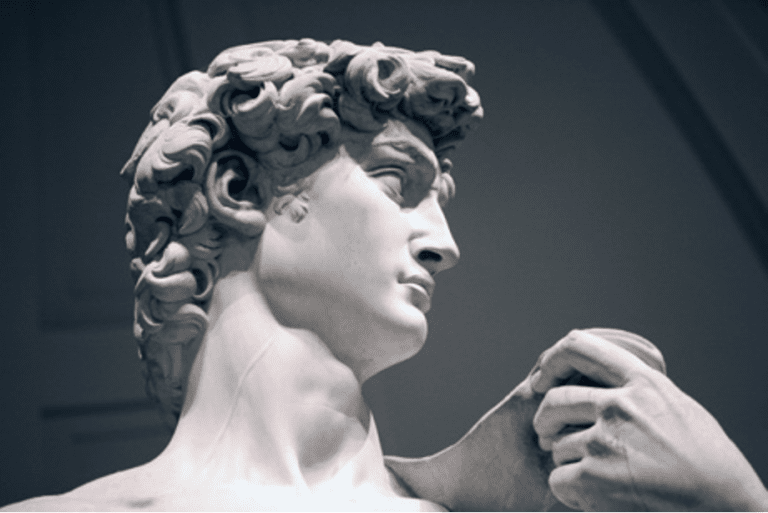 I Carved Until I Set Him Free

On a recent trip to Italy, my husband and I were privileged to explore the vibrant metropolis of Florence. The must-see piece of artwork in this city–which boasts an astonishing amount of art–is Michelangelo’s statue of the biblical David. As Brad and I entered La Galleria dell’Accademia di Firenze where the sculpture is housed, we wore earbuds, listening to a podcast tour of the gallery. We were instructed to enter a certain doorway and informed that we would find David in a rotunda at the end of a hallway lined with other statues and paintings. The podcast encouraged us to make our way to David immediately since “you know you want to see the statue first,” and then go back to view the other artwork later. We followed that advice. 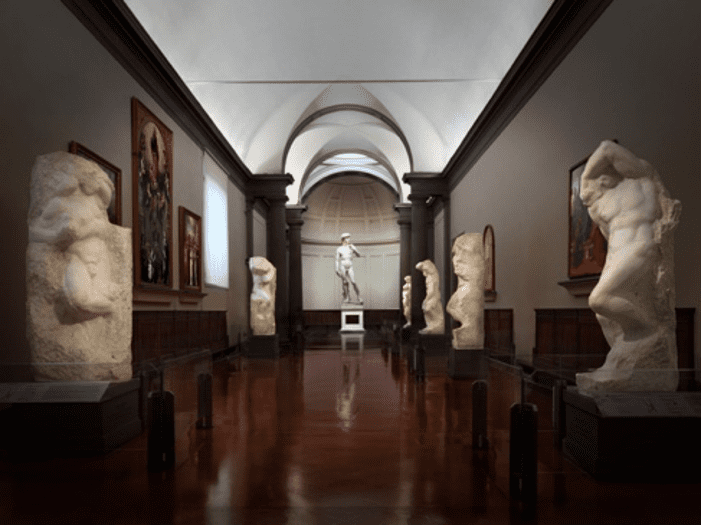 A sizeable crowd of tourists already surrounded Michelangelo’s seventeen-foot masterpiece, and we joined them, slowly circling the sculpture to view it from every angle. The statue certainly lived up to all the hype. One could not help but appreciate the artistic genius of Michelangelo, who was only in his mid-twenties when he was commissioned to sculpt this piece.

After viewing and photographing David for several minutes, Brad and I returned to the hallway through which we had entered, inspecting other statues and paintings. There we found more of Michelangelo’s work, including four sculptures called The Prisoners. Their bulky forms were left rough and unfinished, chisel marks evident, each work portraying the partial figure of a man or youth trapped in marble. The figure that most captured my attention, and has stayed with me since, showed a man struggling to break free from the surrounding stone. His head has not emerged from the marble, requiring him to support a heavy weight, which threatens to crush him. This prisoner is called Atlas, after the Atlas of Greek mythology who was forced to bear the weight of the heavens on his shoulders. 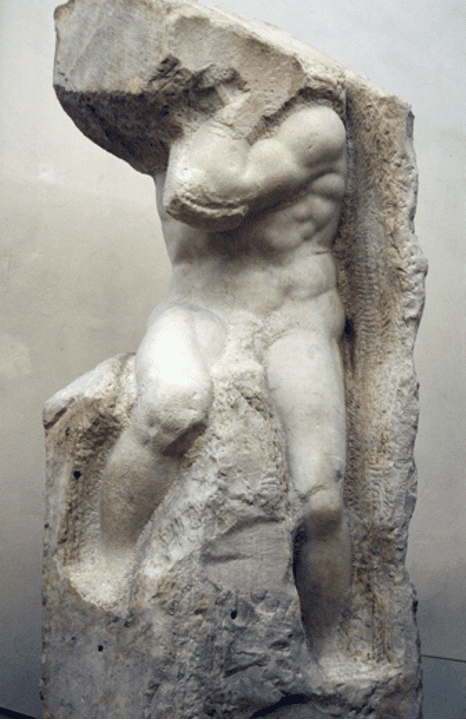 Several times, I walked back and forth between David and The Prisoners, returning to the statue of David to view the flawless stone image–smooth and completely free of its original marble block. But I was repeatedly drawn back to the figure of Atlas. It was both fascinating and heart-wrenching to see his struggle, and I sensed the tension between the stone and the man–the apparent wrestle. I have since wondered why the rough, unfinished figure of Atlas affected me more than the world-famous sculpture of David. I’ve concluded it’s because I empathize with Atlas–I relate to his struggle as I fight daily to break free of the constraints of the natural man.

Once, when Michelangelo was asked to describe his sculpting process, he explained, “I saw the angel in the marble, and carved until I set him free.” To me, the David statue represents someone who has put himself into the hands of the Lord–the master sculptor–the only one able to free us from our natural man prison. Like Atlas, we may push and strain and writhe against the stone that holds us captive, but we alone can never fully free ourselves from the bondage of sin and weakness and addiction. “…they were in bondage, and none could deliver them except it were the Lord their God.” (Mosiah 24:21).

My foster brother Mark has experienced both the torturous struggle to escape sin and addiction, and the liberating process of turning to Jesus Christ and finding deliverance from bondage. His painful journey led through fourteen total years in prison, until he finally reconnected with God and cried out, “I don’t know how to stay clean and sober!” He had learned that “there’s not enough self-help in the universe to fix certain things.” Finally, Mark felt inspired to give the 12-step recovery program another try and discovered that it was about faith and repentance. He began to understand that God had never stopped loving him.

Mark has now been sober for more than two decades and spends many hours each week as a service missionary with the Church’s addiction recovery program. I share the following brief story with Mark’s permission. To me, it is living proof that when we give ourselves over to the Lord, we can literally become new creatures. He is fully able to deliver us from addiction or any other form of bondage.

“When my son Ammon was in the third grade, he invited me to a school assembly for fathers, called Watchdog Dads. They had brief motivational talks about coming in and volunteering to help the kids in the classrooms, on the playground, being hallway monitors, etc. They were playing Rocky themed music in the background–Eye of the Tiger. Of course, they bribed us with pizza and coke, and after a couple of cokes and some pizza I was ready to sign up for almost anything, so I started filling out the application to become a Watchdog Dad.

As I got to the bottom line, it said, “Background check required, $20, felons need not apply.” I had to look at my son and tell him, “Ammon, you know I’ve been in prison before, and I can’t do this, that’s what this means.” He was really disappointed and asked me several times to apply, but he finally let it go and we went home. Of course, that didn’t feel very good.

Well, the next year fourth grade came around and the same assembly came up and Ammon said, “Dad, I really want you to do it this time.” And I said, “Ammon, you remember it’s still the same situation and they just won’t let me, even though I really want to.” He had a funny look in his eye, but he let it go. About a week later I received a phone call from his principal, Mrs. Bellitti, and she said, “Ammon was in my office this morning.” I responded, “Uh oh, what did he do?” She replied, “No, you don’t understand, Mr. Miner. Ammon came in and said, “Mrs. Bellitti, I want my dad to be a Watchdog Dad.” I told him, “Sure, it’s not too late, just fill out this paper and bring it back with $20.” Ammon responded, “You don’t understand, Mrs. Bellitti, my dad has been in prison before, but he’s not that man anymore.”

Suddenly, my eyes started to water, and a peculiar peace fell over me, and then Mrs. Bellitti gently said, “Something persuaded me to do my own background check on you, and you are the kind of dad we want in our school.”

M. Catherine Thomas shares this important insight: “One challenge for the Spiritual Seeker is to distinguish between adjustments he’s able to make in his daily behavior and that radical change of heart the scriptures describe… The old self must be dissolved and a new self unveiled.” Using Alma the younger as an example, Thomas continues, “… we see that he went into the experience of spiritual rebirth one kind of person and came out an entirely different person. The old Natural Man had been swallowed up in the Lord Jesus Christ.”

One of the most interesting facts about Michelangelo’s David is that the huge chunk of marble used for the statue had previously been rejected by other sculptors due to perceived flaws and impurities in the stone. We can take great comfort in knowing that Jesus Christ sees the angel within our marble–that He has a true vision of who we are and what we can become through the power of His atonement. His “work and glory” is to set us free.

Elder Joseph B. Wirthlin counsels: “Spend time with [the Lord]. Meditate on His words. Take His yoke upon you. Seek to understand and obey… As our love for the Lord deepens, our minds and hearts become purified. We experience a “mighty change in … our hearts, that we have no more disposition to do evil, but to do good continually.” (2)

The more we understand the life and teachings of Jesus, the greater our ability to exercise faith in Him and in His atoning power. Then, “… if ye will turn to the Lord with full purpose of heart, and put your trust in Him, and serve Him with all diligence of mind, if ye do this, He will, according to His own will and pleasure, deliver you out of bondage.” (Mosiah 7:33)

I have learned by experience that regular temple attendance (or indexing or doing family history work), and continually reviewing my covenants and intentionally keeping them is one of the surest ways to unleash the Lord’s power to overcome the natural man and resist temptation. “Our covenant commitment to him permits our Heavenly Father to let His divine influence, “the power of godliness,” flow into our lives.” (3)

As I review my life, recalling actions and words I regret, I recognize that the Savior has gradually been changing me. In many ways I can say, “I’m not that woman anymore.” I don’t think or say or do many of the thoughtless or judgmental things I used to think and say and do. Of course, I’m not completely free from my marble prison, but I can feel the power of Jesus Christ working in me, slowly shaving off my rough edges. How grateful I am for the Master sculptor. “If the Son therefore shall make you free, ye shall be free indeed.” (John 8:36)

Such a relatable struggle, oh how we all long to be set free. I find Atlas a comfortable friend. We are fellow travelers, both seeking relief from our bondage. So grateful Jesus Christ is my patient and skilled sculptor. I weary of this work, but He never does.

This is beautiful. As I read, I have a desire to strive to be born again daily, and not be that man I was yesterday. I also relate more to Atlas, and think he, rather than the "perfect" David, ought to be our focus for ourselves as well as how we see others. Thank you!