How was There a Night Without Darkness? | Meridian Magazine 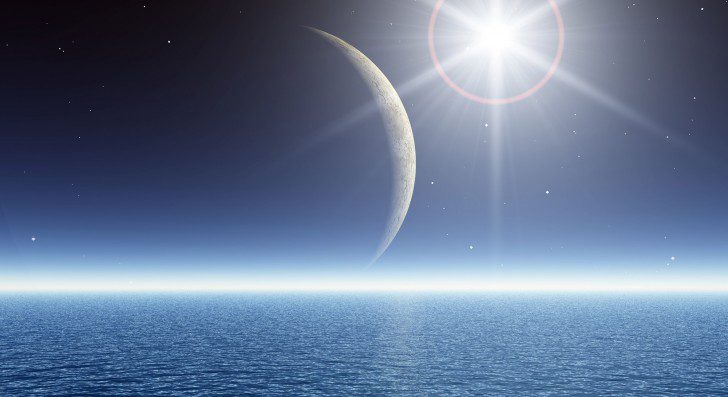 How was There a Night Without Darkness?

When a Lamanite came into Zarahemla prophesying that there would be “great lights in heaven,” leading to a night with “no darkness … as if it was day,” and “many  signs  and wonders in heaven” (Helaman 14:2–6),[1] some Nephites were skeptical, and even hostile (Helaman 16:2).[2] In the next five years, both the skepticism and the hostility grew, and a date was set by which “all those who believed in those traditions should be  put to death” if the sign failed to appear (3 Nephi 1:7, 9). Yet, as prophesied, “at the going down of the sun there was no darkness” and “it was as light as though it was mid-day” (vv. 15, 19).[3]

Today, this prophetic sign remains difficult for some to believe. How could there be a night without darkness? Exactly how God produced such a sign is impossible to know for certain, but there are natural astronomical and atmospheric events which may shed some light on this matter.

Hugh Nibley suggested to his students once that this sign could have been caused by a supernova, comparing it to one in AD 1054 which “could be seen all over the world” and “was almost as bright as the sun.”[4] Astronomers have documented a supernova in the 11th century which, according to lead researcher Frank Winkler, provided enough light that “people could probably have read manuscripts at midnight by its light.”[5]

Yet Samuel made it sound like the new star in the sky was a separate sign from the night without darkness (Helaman 14:5).[6] In this regard, John A. Tvedtnes noted some possible similarities to the atmospheric effects caused by an explosion that took place in a remote part of Russia on June 30, 1908.[7] Known to scholars simply as the “Tunguska event,” scientists are still unsure what exactly caused the explosion.[8] Its effect on the night sky, however, is well documented. As reported by NASA, “Night skies glowed, and reports came in that people who lived as far away as Asia could read newspapers outdoors as late as midnight.”[9]

In the most comprehensive study on the event to date, Vladimir Rubtsov documented “atmospheric phenomena” in 155 different places,[10] spread across several days, beginning a few days before the explosion.[11] Tvedtnes reported, “For months afterward, there were spectacular sunrises and sunsets throughout the world, caused by the vast amount of dust thrown up into the atmosphere.”[12] There were also “daytime anomalies such as intense and prolonged solar halos, mother-of-pearl clouds, and a Bishop’s ring.”[13]

It was the night of June 30, however, which was most spectacular. According to Rubtsov, “throughout a territory of about 12 million km2, there was no night separating June 30 and July 1.”[14] That evening, a Soviet astronomer “waited in vain for night to fall,” and in Germany, “The intensity of the nighttime luminosity was considerable. … At 1.15 [AM] it was as light as daytime.”[15] Despite covering a vast region, “no atmospheric anomalies occurred in the area of Tunguska” itself,[16] and the intensity of nighttime light “seemed to increase from East to West,” thus indicating that it was brighter the farther away from the Tunguska explosion one went.[17]

A miracle can be defined as “a beneficial event brought about through divine power that mortals do not understand and of themselves cannot duplicate.”[18] God uses miracles so that great benefits may be brought about for mankind “according to their faith” (see Mosiah 8:18; Alma 37:40). At the same time, Elder John A. Widtsoe, a member of the Quorum of the Twelve and himself a scientist, gave assurances that “This is a universe of law and order,” and thus “a miracle simply means a phenomenon not understood, in its cause and effect relations.”[19]

The phenomena and anomalies associated with the Tunguska event in 1908, with nightglows in the days before, with total day-like brightness the night after, and also with continuing nightglows and even daytime effects in the days that followed surprisingly demonstrate at least one possible naturalistic understanding of how God could have fulfilled Samuel’s prophecy,[20] even if such astronomical and atmospheric observations cannot be fully understood or explained.[21]

Regardless of the actual method the Lord used to accomplish this miracle, the night without darkness was deeply symbolic and meaningful. Kimberly M. Berkey noted, “The excessive light surrounding Christ’s birth acts as a kind of morning,”[1] the beginning of a new dawn welcoming the Savior into the world: the Light of the World had come,[2] introduced into the world by light.

Furthermore, just as with the appearance of the new star, any method for making night bright as day would have required a great deal of advanced planning on the part of the Lord. Elder Neal A. Maxwell taught, “the so-called ‘little star of Bethlehem’ was actually very large in its declaration of divine design! It had to have been placed in its precise orbit long, long before it shone so precisely!”[3]

Elder Maxwell went on to explain that the Lord puts the same care and attention into the lives of his children. “His overseeing precision pertains not only to astrophysical orbits but to human orbits as well.”[4] Just as the new star “was in its precise orbit long before it so shone,” so are individuals “placed in human orbits to illuminate.”[5]

[4] Maxwell, “In Him All Things Hold Together.”

[2] Even though some believed the earth could move at God’s command, “and it appeareth unto man that the sun standeth still” (Helaman 12:15), Samuel was clearly talking about something else entirely, as he said they would be able to clearly discern the setting and rising of the sun, and there would still be no darkness (Helaman 14:4). So the sun would not appear still in this instance. For discussion of Nephite cosmology, see Book of Mormon, “Why Did Mormon Say the Children of Men are Less than the Dust of the Earth? (Helaman 12:7),” KnoWhy 183 (September 8, 2016).

[4] Hugh Nibley, Teachings of the Book of Mormon, 4 vols. (American Fork and Provo, UT: Covenant Communications and FARMS, 2004), 3:291. Brant A. Gardner, Second Witness: Analytical and Contextual Commentary on the Book of Mormon, 6 vols. (Salt Lake City, UT: Greg Kofford Books, 2007), 5:191–192, critiqued this suggestion and proposed, instead, that it was a volcanic eruption, which would have provided light more locally.

[5] “Astronomers Peg Brightness of History’s Brightest Star,” National Optical Astronomy Observatory News, March 5, 2003, online at noao.edu. This is reporting on a supernova documented in AD 1006, not 1054.

[6] Gardner, Second Witness, 5:191–192: “If a day, a night, and a day of light had occurred in the Old World, the evangelists who noted other signs and miracles of Christ’s birth would surely have made it part of their record. We must therefore assume that the lighted night was a New World phenomenon, not a worldwide one. … A bright new star would be a good explanation for the Old World phenomenon, but there is still the issue of the differentially described phenomena for the Old and New Worlds. The descriptions point to different underlying events that are described in a similar context.”

[13] Rubtsov, The Tunguska Mystery, 21. A Bishop’s ring “is a diffuse brown or bluish halo around the Sun” (p. 21), so-called because of its discovery by the Reverend S. Bishop.

[20] Interestingly, Aztec sources report a similar phenomenon ca. AD 1500. Waston, “The Tunguska Event,” 7 quoted one source as describing the falling object which caused the Tunguska explosion as a “forked tongue of flames,” which is strikingly similar to the account of “an omen of evil” in the Florentine Codex. “Ten years before the Spaniards arrived here, an omen of evil first appeared in the heavens. It was like a tongue of fire, like a flame, like the light of dawn. … It was there to the east when it thus came forth at midnight; it looked as if day had dawned, day had broken. Later, the sun destroyed it when he rose.” Florentine Codex, as cited in Gardner, Second Witness, 5:192, 238, emphasis added. Gardner pointed out that this account “is historical evidence that people in [Mesoamerica] saw signs in the heavens which made night as bright as day. This passage is not necessarily evidence of the lights themselves, but it documents that at least some Mesoamericans accepted that such phenomenon was possible and that it had a divine significance … it is not hard to understand how the Nephites might have likewise believed in and described a similar culturally significant phenomenon” (p. 238).

[21] While obviously no explosion was reported in the Book of Mormon, it should be pointed out that (1) the explosion happened in the morning of June 30, 1908, so would not have been seen immediately before nightfall; and (2) the nightlight effect was stronger at greater distances away from the explosion. If a similar, though perhaps smaller scale, phenomena occurred in a remote area somewhere a few hundred miles from Nephite territory, they likely would not have seen, felt, or heard the explosion. In the Tunguska event, the falling object was seen as “a bright bluish-white light in the sky” from 600 miles away. See Waston, “The Tunguska Event,” 7. Such a sight by Nephite astronomers could have been understood as one of the “great lights in heaven” or the “many signs and wonders in heaven” foretold by Samuel. Mormon does assure readers that there were other signs leading up to the night without darkness, which nonetheless failed to persuade detractors (3 Nephi 1:4–5).