How to Deal With Temple Questions | Meridian Magazine 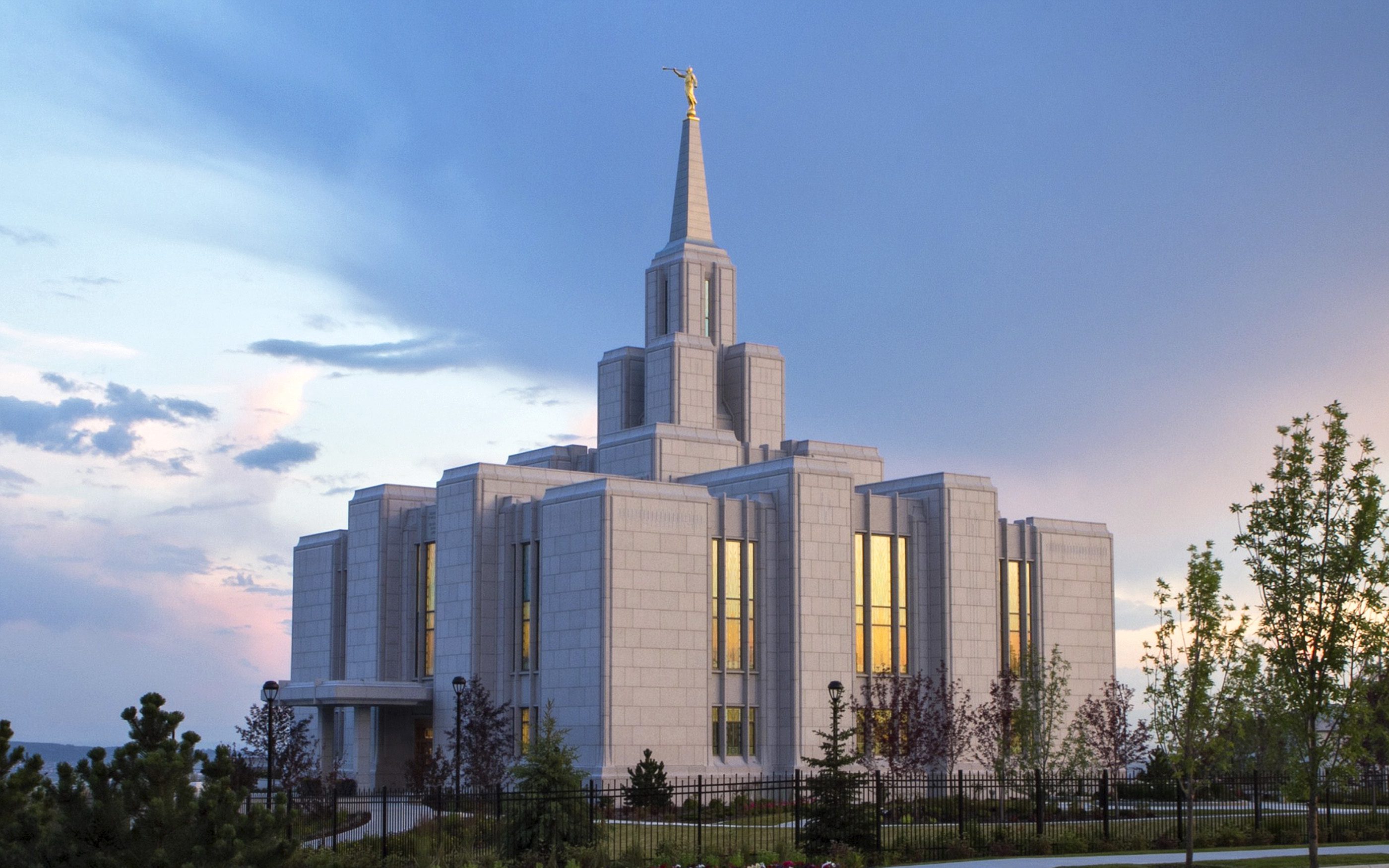 How to Deal With Temple Questions

Last Week a young woman came into the center.  She was accompanied by two sister missionaries who had been teaching her.  She was making good progress until she stumbled onto some video that someone had posted of temple ordinances.  She didn’t understand and wanted some answers.

As people come into the visitor’s center of the Paris Temple, after they are greeted by the beautiful Holdman stained glass of Christ, they are drawn to the large temple model in the middle of the room.  As they walk around it they come face to face with temple history.  The models of the tabernacle and Herod’s temple entice them over to see why these are in the same room as this beautiful French temple.

Those that are inquisitive and spend some time reading the information signs are still left to wonder.  The spirit often urges further discussion so I pulled out this PowerPoint so we can look into and around the models of these ancient structures mostly unknown by those both in and out of the Church. For some, it is enough to point out the three compartments that they also saw in our temple model.

From the ground one can see the altar of sacrifice and the basin of water also called the molten sea where the priests ritually purified themselves before entering into the inner sanctuary of the Holy Place.

The striking symbol of the tabernacle’s arrangement put it in the very middle of the camp of Israel as if to communicate that God should always be the center of our lives and communities.  Interestingly each tribe was assigned a specific location with Ephraim and Manasseh on the west and Judah on the east. Perhaps world geography was being symbolized??

The inner sanctuary was divided by a veil into the “Holy Place” and the “Holy of Holy.”  Like the items in the outer court, the three items in the Holy Place were to teach through symbols, just like temples today.

The simplicity of the “Holy Place” belies it’s symbolic message with the menorah, table of shew bread, the altar of burning incense, and the angel embroidered veil.

Once portability wasn’t an issue and Israel was established with Jerusalem as its holy city, the tabernacle was replaced with Solomon’s temple which was later destroyed and rebuilt twice.  The model in our center is of the last rebuild done by Herod and referred to by Christ while driving out the money changers at the beginning of His ministry, as My Father’s House. At the end of His ministry, He would return to again clean this temple calling it “my house.”

This permanent temple structure added an outer courtyard filled with columns, but no ordinances were performed here. Some have suggested that this represented the Garden of Eden with its tree trunks since lead to the first ordinance courtyard.

Though the structure was far more elaborate and splendid, the items in each compartment were basically the same.  The small basin was replaced with a large basin set on the backs of 12 oxen and the altar of sacrifice was much larger. The single menorah was replace with several but the altar of incense and shew bread table were similar.

The embroidered veil and mercy seat with its cherubim and ark of the covenant still symbolized the presence of God and could only be approached through the veil on the Day of Atonement by the appointed High Priest.

When placed side by side, the tabernacle and temple could be seen as a three compartment symbol of the ordinance pathway leading from the world into the Holy Place, where one is symbolically prepared to enter God’s presence. This is the straight and narrow way referred to in the Doctrine of Christ and alluded to in Alma 13:2 saying the priestly pathway was there to teach the people how to come to Christ for salvation.  As the items in the courtyard symbolize, to live in the world without becoming like the world requires obedience by sacrifice and a purification from the sins of the world. Jacob[1] and others taught that this comes through living, sharing, and magnifying our callings in the gospel.

All this symbolism is consistent with how the Lord reveals His most sacred things. When the Savior was questioned about His use of metaphor He explained that this was both a protection for some and a selective means for others to understand sacred teachings called “the mysteries.”

Symbols and metaphors are used by God to both conceal and reveal.  Conceal from those who don’t have ears to hear, i.e. those who would be hurt by the responsibilities that additional knowledge carries.  And, reveal to those ready and desiring to know more, know deeper, know how to apply, etc. God delights in sharing with those ready and seeking.

So today’s temples again use or symbolize three compartments again representing the three levels spoken of by Paul in Corinthians 15 as that of the stars, that of the moon, and that of the sun. The laws and teachings in each room progressively lead from the telestial through the terrestrial to the celestial.

The straight path that teaches us today through modern symbols teaches us how to live in the world without becoming like the world; that as the world becomes more and more dangerous we can “stand in the holy place” for life in our families and stakes.  The ordinances and sacred work for our ancestors allow us to repeat them so as to be transformed by the Holy Spirit in preparation to one day enter the presence of the Lord.

In teaching about faith, the Prophet Joseph taught, “Unless they have an actual knowledge that the course they are pursuing is according to the will of God, they will grow weary in their minds and faint…”  Today, more and more, otherwise good people are fainting from devoted activity in the Church.  Is it because we don’t know how to gain this “actual knowledge” from God?

As grandparents and after Adam and Even had been taught the value and purpose of the symbols of sacrifice they tried to hold Family Home Evenings to teach it to their children but Satan came among them and said, “Believe it not, and they believed it not.” The sequel included secret combinations, murder, and crime.  By the end of Chapter 5, Adam and Eve and certainly questioning their value in God’s plan.  The last verse says, “And thus all things were confirmed unto Adam, by an holy ordinance.”

This concept that ordinances symbolically confirm our standing with God and His covenant promises relative to the associated laws is again repeated with Abraham.  He had been promised posterity but ten years later in Gen 15, he again questions since none have come.  Again he is promised and he believes but then asks for some sign by which he can know that the promises will be realized.  God gives him an ordinance which provided the symbols by which he could know and maintain faithfulness for another fifteen years and beyond.

Alma also underlined their understanding of Mosaic ordinances, not as a way to salvation but as a symbolic means whereby their faith in Christ was strengthened so as to retain a day-to-day hope.

It is a divine pattern that pathway principles are coupled with ordinances so that we can receive, through their symbol-enabled revelation, the “actual knowledge” that our course in life pleases God.

For example, the symbols of baptism include being buried in the water and then raised up again. Paul helped us understand that it is the natural man that is being buried but we each know this is not an event that suddenly changes us.  It is a symbol that shows us how to know that the promises of baptism are still in effect. We might ask, “Am I more patient and loving than I was say five years ago?”  If so then the ordinance confirms we are on the path to becoming through the transformation of our covenant relationship with Christ which is then renewed each week through the sacrament.

But wait, the voice of the Father then adds another important principle to the Doctrine of Christ which defines the strait path, “he that endureth to the end.”  But where is the associated ordinance?  It comes three verses later as the “straight and narrow path” into which we have entered by baptism.

As shown above, this straight path is the ordinance pathway of the temple. The ordinances and associated symbols specifically allow us to measure our course in life with what is expected under the direction of the Spirit.

It is even confirming to know that, in Hebrew–the ancient divine language–the word “temple” in English is derived from the word “yakol” which means “to endure, overcome, and have power.”

It is clear then as Joseph Smith contextualizes President Nelson’s call to gather Israel with all of our might and strength, lest they “weary and faint” as these latter days become more turbulent:

“What was the object of gathering the people of God in any age of the world…was to build unto the Lord a house whereby He could reveal unto His people the ordinances of His house and the glories of His kingdom, and teach the people the way of salvation; for there are certain ordinances and principles that, when they are taught and practiced, must be done in a place or house built for that purpose.” (Teachings of the Prophet Joseph Smith 307–308)

The sacred nature of both heavenly things and how they are communicated to us in a very personal way is underlined by the Lord after showing the three kingdoms of glory. Notice the phrases “surpass all understanding,” “not lawful for man to utter,” “neither is man capable to make them known,” “understood by the power of the Holy Spirit,” and finally, “seeing and knowing for themselves.” The temple is such a place, reserved so that God can do His own teaching and confirming through this sacred tool of symbols through sacred ordinances.

He doesn’t just want to inform us, download divine data to our mortal minds; He wants to transform us so that we will be capable to live in His presence of eternal glory!

As we finished the PowerPoint she was overcome by the Spirit and asked if we could make another appointment for her best friend.  The Spirit was calming and instructive as we met a week later.  They had many questions but now they were centered on the Doctrine of Christ instead. They continue to investigate as they work towards their baptisms.

[1] Jacob 1:19 And we did magnify our office unto the Lord, taking upon us the responsibility, answering the sins of the people upon our own heads if we did not teach them the word of God with all diligence; wherefore, by laboring with our might their blood might not come upon our garments; otherwise their blood would come upon our garments, and we would not be found spotless at the last day.

Ezekiel 33:8 if thou dost not speak to warn the wicked from his way, that wicked man shall die in his iniquity; but his blood will I require at thine hand.

The genesis of Temple ordinances and practices can be viewed on this YouTube video: https://www.youtube.com/user/fairldsorg (Look for the Emperor Constantine video).

Thank you very much for your very interesting Temple inf. With all the details, may The Lord bless you