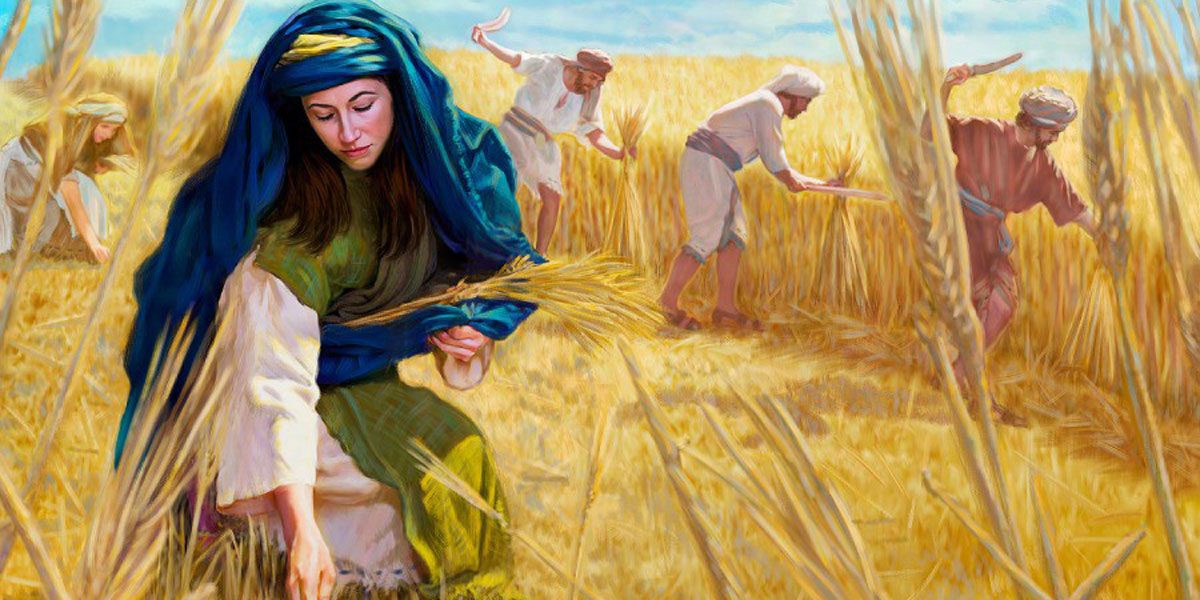 “Wherefore, I know that thou art redeemed, because of the righteousness of thy Redeemer.”
2 Nephi 2:3

The book of Ruth recounts the story of Ruth, a Moabite, who moved to Bethlehem with her mother-in-law Naomi (Ruth 1:19). While there, Ruth met Naomi’s relative Boaz (2:3), whom she eventually married. In marrying Ruth, Boaz performed “the part of a kinsman” for her (3:13). The phrase, “do the part of a kinsman” can also be translated as “redeem,” and the kind of “redemption” we see in the book of Ruth can help us understand how Christ redeems us, as explained in the Book of Mormon.[1]

According to LDS scholar Benjamin Spackman, one of the keys to understanding redemption in the Old Testament and the Book of Mormon is, oddly enough, Israelite names.[2] The Old Testament contains names like Abijah, “God is my Father,”[3] Joah, “God is (my) brother”[4] or even Elliam “God is my uncle.”[5] After studying these names, Spackman realized that they all demonstrate the ancient Israelite idea that we are all in a kinship relationship with God.[6] Spackman explained, kinship was one of the main things that dictated how societal worked, and “kin had particular duties to each other within that structure.”[7]

One of the most important of these functions, as Spackman has observed, was buying back (redeeming) a family’s land that they had sold because they were too poor (Leviticus 25:25–34) members of the family that had been sold into slavery for the same reason were also bought back (vv. 47–50).[8] Another element of being a redeemer was the Levirate law of marriage in which a man married his brother’s widow whose children would be born in the deceased brother’s name, as one sees in the book of Ruth.[9] These kinship duties were also extended to those outside the tribe through covenants, which one also sees in Ruth.[10]

This meant, according to Spackman, that terms like father, brother, or uncle that reflect this idea of covenantal kin, terms we might usually think of as purely biological today, acquired a slightly different meaning: “they often identify people who are kin through covenant.”[11] In this way, those outside the family could be symbolically brought into the family through covenant, as though they had always been family.[12]

This Israelite idea that covenants could establish a family-like relationship between people who were not biologically related was also extended to God, which explains the odd personal names in the Old Testament. [13] Ancient Israelites, may well have thought of this relationship when they approached God in prayer, and “when in need of help, they called on God and expected him to respond because they were kin.”[14] Ultimately, whether someone was actually kin or was made kin through covenant, it was the kinsman’s responsibility to redeem or buy back both family land and family members that had been sold.[15] And when ancient Israelite’s asked for God to redeem them, they were considering Him to be their kin through the covenant relationship they had with Him.[16]

With this context, the Book of Mormon’s teachings about the Redeemer make more sense.[17] 2 Nephi 2:3, for example, states, “wherefore, I know that thou art redeemed, because of the righteousness of thy Redeemer.” Spackman has observed that in the book of Ruth, the kinsman that was more closely related to Naomi than Boaz, did not fulfill his obligation to redeem Ruth.[18] Boaz had to fill this role instead. With this story of an unreliable kinsman in mind, Spackman paraphrases Lehi’s words as, “‘because God is your kinsman-redeemer and unlike human kinsman-redeemers who are not always reliable and faithful in carrying out covenantal obligations, God is righteous. Therefore, you, Jacob, are surely redeemed, bought back, repurchased.’”[19]

Ben Spackman has observed that “there is a kind of quasi-kinship among Latter-day Saints.”[20] Formally, the duties of church members “are often summed up with Mosiah 18:8–10, ‘mourning with those who mourn’ and so on, but informally, Latter-day Saints perform the duties of community or even kinship for fellow Saints whom they know only remotely, if at all.”[21] Although times are different now than they were in ancient Israel, “fundamentally both LDS and Israelite ideas of kinship and mutual responsibilities are concerned with relationships. On such a basic level, we can perhaps apply some of God-as-divine-kinsman to our ideas of atonement.”[22]

Remembering our kinship relationship with God can change how we see Him: “If our relationship with God is not characterized primarily as debtor to creditor, but as kin to kin (whether kin by covenant or kin by nature), then perhaps we can do as the Israelites and call on Him for help in terms of that relationship.”[23] Ultimately, “thinking of God as a family member we turn to for help instead of as a banker concerned primarily with having his debt repaid means that we are more likely to seek that help.”[24]

Spackman concluded by stating that Hebrews 4:15–16 changes how we understand and approach God “on the basis of how we conceive of him: ‘We do not have a high priest who is unable to sympathize with our weaknesses, but we have one who in every respect has been tested as we are, yet without sin. Let us therefore approach the throne of grace with boldness, so that we may receive mercy and find grace to help in time of need’ (NRSV).”[25] May we all remember the redeeming power of God, and approach Him as our kinsman, knowing He will help us “in time of need.”[26]

[1] For more on redemption in the Book of Mormon, see Book of Mormon Central, “How Are Atonement, Resurrection, Judgment, and Redemption Interconnected? (Mosiah 3:17),” KnoWhy 275 (February 15, 2017).