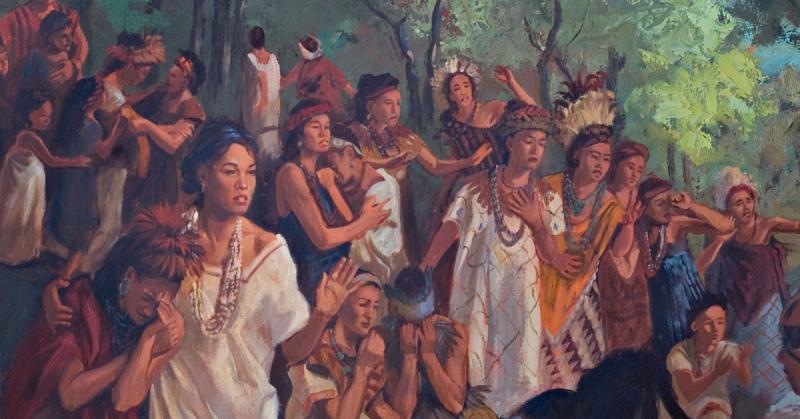 How “Saints” and Jacob’s Teachings Can Help Contextualize Polygamy

The second chapter of the book of Jacob in the Book of Mormon contains the only explicit teaching about polygamy in the Nephite record.

Members of The Church of Jesus Christ of Latter-day Saints today interpret this passage as saying “that monogamy is God’s standard for marriage unless He declares otherwise” (Official Declaration 2, citing Jacob 2:27, 30). Historically, plural marriage was practiced by Latter-day Saints as part of the unfolding “restoration of all things.” The Prophet Joseph Smith privately introduced the principle of plural marriage to a handful of men and women in the 1840s (see Doctrine and Covenants 132), and from 1852–1890 the Church officially and openly practiced such.2 “Women and men who lived within plural marriage attested to challenges and difficulties but also to the love and joy they found within their families. They believed it was a commandment of God at that time and that obedience would bring great blessings to them and their posterity.”3

Although the historical practice of plural marriage was moderated by modern revelation under the direction of the President of the Church, Latter-day Saints in the past, as today, understood Jacob 2:24–30 as accommodating an otherwise prohibited practice. Drawing from Jacob 2, apostle Orson Pratt, in an 1859 sermon, taught that polygamy was “positively forbidden to be practiced by the ancient Nephites” except as otherwise commanded by God.

The same Book of Mormon and the same article that commanded the Nephites that they should not marry more than one wife, made an exception. Let this be understood—“Unless I the Lord shall command them.” We can draw the conclusion from this, that there were some things not right in the sight of God, unless he should command them. We can draw the same conclusion from the Bible, that there were many things which the Lord would not suffer his children to do, unless he particularly commanded them to do them.4

The history of plural marriage in the Church of Jesus Christ—including the stories of individual Latter-day Saint men and women who practiced it—has been narrated in the first two published volumes of the Church’s new series Saints: The Story of the Church of Jesus Christ in the Latter Days. The first volume of Saints, which covers the years 1815–1846, describes how Joseph Smith instituted the practice privately among his most trusted followers as he gradually taught them about the eternal nature of marriage under the new and everlasting covenant (D&C 131:1–4; 132:1–6). Among other things, it tells the stories of some of the women the Prophet was sealed to in his lifetime, describes how the controversial practice alienated some of Joseph’s closest allies, and illustrates how polygamy served as a trial of faith for many of its practitioners.5 As a companion Church History Topic article explains,

After receiving a revelation commanding him to practice plural marriage, Joseph Smith married multiple wives and introduced the practice to close associates. This principle was among the most challenging aspects of the Restoration﻿—for Joseph personally and for other Church members. Plural marriage tested faith and provoked controversy and opposition. Few Latter-day Saints initially welcomed the restoration of a biblical practice entirely foreign to their sensibilities. But many later testified of powerful spiritual experiences that helped them overcome their hesitation and gave them courage to accept this practice.6

The second volume of Saints, which picks up directly after the end of the first volume and covers the years 1846–1893, develops the narrative further by detailing how plural marriage shaped the lives and faith of Latter-day Saints living in Utah and other parts of the American West during the middle to the end of the nineteenth century.7 Several prominent Latter-day Saint women who vocally defended plural marriage—including Helen Mar Whitney and Emmeline B. Wells—are featured in volume two, as are women who opposed it, such as Ann Eliza Young, a former plural wife of Brigham Young. One of the themes that looms large over this volume of Saints is the fierce opposition faced by members of the Church due to the strident anti-polygamy crusades of the United States federal government. The book also situates the termination of plural marriage as an official practice of the Church in its historical context, delving into the circumstances surrounding Wilford Woodruff’s 1890 manifesto.

As a few Book of Mormon Central KnoWhys have explored (see below), Jacob’s teachings about polygamy are made more comprehensible when they are read in light of ancient Israelite and Mesoamerican social practices and in light of the larger point of Jacob’s speech. By making Jacob’s teachings more comprehensible, readers of the Book of Mormon are thereby benefitted as they learn to recognize and apply the principles put forth by this inspired prophet.

What Does the Book of Mormon Say About Polygamy?

Why Does the Book of Mormon Warn Against Seeking after Riches?

Why is Amulek’s Household Significant?

1.For an exploration into the biblical context of this passage, see Brian J. Baird, “Understanding Jacob’s Teachings About Plural Marriage from a Law of Moses Context,” Interpreter: A Journal of Latter-day Saint Faith and Scholarship 25 (2017): 227–237.

2.For an overview of the history of Latter-day Saint plural marriage, see the Gospel Topics essay “Plural Marriage in The Church of Jesus Christ of Latter-day Saints” online at www.churchofjesuschrist.org. Elder Orson Pratt publicly announced the practice of plural marriage in a discourse delivered in the Salt Lake Tabernacle on August 29, 1852. See Orson Pratt, “Celestial Marriage,” Journal of Discourses 1:53–66. A transcription of the shorthand notes to this sermon has been made by LaJean Purcell Carruth and is available online here. President Wilford Woodruff issued the manifesto now canonized as Official Declaration 1 signaling the end of the official practice of plural marriage in 1890.

5.For the range of topics related to plural marriage narrated in the first volume of Saints, see “plural marriage” in the book’s index.

7.Once again, for the range of topics related to plural marriage narrated in volume two of Saints, see “plural marriage” in the book’s index.