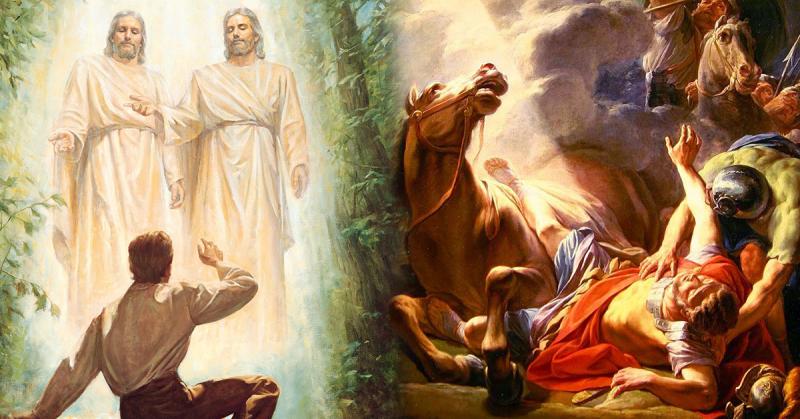 Joseph Smith claimed that in 1820 he beheld a vision of God the Father and His son Jesus Christ. This “First Vision” started Joseph Smith on a path that ultimately led to the Restoration of Jesus Christ’s church in the latter days. Four accounts of the First Vision were written or dictated by Joseph himself. Five other accounts come from what others remembered him saying about his vision. Together, these accounts make the First Vision “the best-documented theophany—vision of God—in history.”1 Even though these accounts differ somewhat in emphasis and detail, they can still be pondered and cherished as supporting witnesses to this crucial and pivotal event of the Restoration. That is because the most important parts of the vision are consistent in each retelling.2

Joseph Smith wasn’t the first person to experience a miraculous manifestation from God. Nor was he the first prophet or apostle to report a sacred experience in different ways to different audiences. In the Book of Mormon, Alma the Younger experienced a miraculous conversion that involved a thundering angel, the quaking of the earth, and Alma’s own incapacitation for three days. Alma recorded this phenomenal experience three times, each time giving a slightly varying account (Mosiah 27:8–37, Alma 36:4–26 and 38:6–8).3

Similarly, the New Testament contains no less than five accounts of the Apostle Paul’s conversion.4 Two accounts come from epistles that most scholars believe were written by Paul himself (1 Corinthians 15:3–8; Galatians 1:15–24). They don’t give much detail about the event, other than that Paul saw Jesus Christ after His resurrection. The three other accounts come from the book of Acts, which was written by the author of the Gospel of Luke (Acts 9:3–30; 22:6–21; 26:12–21). These accounts are more detailed, literary, and vary from audience to audience.

Varying retellings of a story do not necessarily detract from its authenticity. In fact, some variation is expected—especially from second-hand sources—and can even enhance an account’s historical plausibility.5 “Historians expect that when an individual retells an experience in multiple settings to different audiences over many years, each account will emphasize various aspects of the experience and contain unique details.”6

Luke, for example, may have been tailoring his telling of Paul’s conversion in different ways to emphasize certain things to certain audiences.7 Even though Paul’s reported conversion stories in Acts differ in some ways from one another, it doesn’t take away from his first-hand witness of the resurrected Jesus Christ, as Paul twice affirmed in his own epistles. Likewise, differences in the accounts of Alma’s conversion story can enrich our understanding of his testimony. Legal scholar John W. Welch has noted:

The three accounts … consistently reflect different vantage points in Alma’s life. In Mosiah 27, Alma is a young man, spontaneously overwhelmed by the power of the angel and terrified by the prospect of the day of judgment (see Mosiah 27:31). Later in Alma’s life, it is clear that the older man has faithfully and successfully served his Lord and his people all the rest of his days (see Alma 36:24–26) so that he now emphasizes his longing to be present with God (see Alma 36:22).8

Paul, Alma, and Joseph Smith drew strength from their foundational spiritual experiences, and shared them multiple times over the course of their lives. Hundreds of years later, their remarkable testimonies are continuing to build faith in Jesus Christ and help draw millions unto Him.