How Our Modern Prophets Were Influenced by Their Fathers | Meridian Magazine 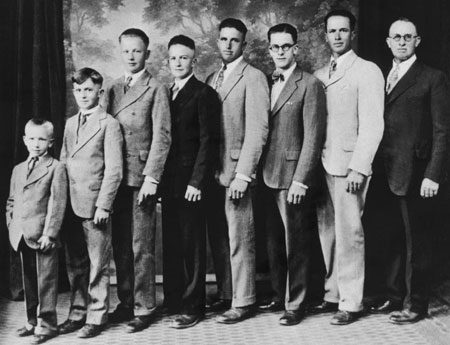 How Our Modern Prophets Were Influenced by Their Fathers

All images via LDS.org and History.lds.org.

With Father’s Day this Sunday, it is the perfect time to reflect on our gratitude for the influence of our earthly and Heavenly Father. In pondering, you can probably pinpoint the aspects of your life that have been affected by your father or the father figures that have played a role in your development.

As we listen to the voices and messages of modern prophets, who are wise and seasoned by so many years of life’s experience, we may forget that they too were once young children and are also a reflection of the influence of their fathers before them.

Our beloved prophet, President Thomas S. Monson was raised by an entire bustling extended family, not just two parents. His grandfather had purchased a piece of land in Salt Lake on which he built his own home as well as a duplex where Tommy’s Uncle John and Aunt Margaret lived and where his own immediate family resided in the east side of the building. “On that corner lived my mother and her three sisters. I felt totally at ease in any of their homes, never feeling the need to knock at the door. Always I was welcome,” Thomas S. Monson wrote.[i]

His father, George Spencer Monson, whose middle name President Monson shares, worked in the printing business. When Thomas S. Monson was 12, his father was general manager of the Western Hotel Register Co. and it was Tommy’s after school job to go by each café and pick up any changes for the following day’s menu so that a new one could be printed in the shop.

His father’s work must have made some impression as Thomas S. Monson would go on to have a distinguished career in printing, rising through the ranks of the Deseret News to become chairman of the board of Deseret News Publishing Co., President of Printing Industry of Utah and later a member of the board of directors of Printing Industries of America.[ii]

His father once took him to a special priesthood meeting to hear Elder LeGrand Richards, then a member of the Quorum of the Twelve speak. Thomas S. Monson recalls that, “This was one of the only times in our lives when we went to such a meeting together.” But his father’s influence was felt in other ways.

We all know President Monson for his personal and frequent ministering to those who are sick or lonely or in need. Turns out he witnessed an important example of this from a young age. He says he remembers vividly riding along in his father’s 1928 Oldsmobile on many a Sunday afternoon to the home of his father’s Uncle Elias who was disabled: “I would wait in the car while Dad went inside.  Soon he would emerge from the house, carrying his crippled uncle in his arms like a china doll. I would open the door and watch how tenderly my father would place Uncle Elias in the front seat and wrap a blanket around his legs. Then we would take him for a ride around the city. Dad never wanted any thanks for this service, but his lesson was not lost on me.”[iii]

Clearly we can see the grown-up President Monson that we know and love, reflected in the tender image of his father’s unending service to an ailing uncle.

Bryant S. Hinckley and family. See if you can spot our beloved Gordon B.

Most of us probably know the famous story about the letter from Gordon B. Hinckley’s father to his young missionary son that turned not only his mission around, but changed his life. “Forget yourself and go to work” has no doubt been used by many fathers since then to motivate and inspire their children, but Bryant S. Hinckley had influence in other important areas that you may not know about.

Like his son, Bryant S. Hinckley gave many years of service to The Church of Jesus Christ of Latter-day Saints. He served on the general board for the “Young Men’s Mutual Improvement Association” for 25 years during which time he moved for the adoption of the Boy Scout program for the Church.

“Many of the themes President Hinckley has addressed have root in the writings of his father, who authored more than 30 books…Bryant Hinckley’s writings admonish perseverance, dependability, enthusiasm, service, education, and faith”[iv]. Certainly those themes are familiar to any who listened to the addresses and admonitions of Gordon B. Hinckley.

Bryant studied at Brigham Young Academy under the direct tutelage of Karl G. Maeser. In his graduating year there, he won a contest to be the speaker at commencement and was noted as a great orator through the rest of his life; a trait passed on to his son that benefitted the whole Church.

Perhaps most poignantly, while serving as the president of the then Northern States Mission, Bryant S. Hinckley tried to convince LDS Church leaders to rebuild the Nauvoo Temple. It was a passionate pursuit of his. Though he was ultimately unsuccessful in the effort, he wrote that the he knew temple would rise again and that “annually, thousands…will visit it”[v].

It was perhaps, in part, with his father in mind that President Gordon B. Hinckley welled up with emotion as he announced nearly 60 years later that the Nauvoo Temple would indeed be rebuilt. His father’s vision became prophetic as the newly rebuilt Nauvoo Temple was dedicated on June 27, 2002 and now receives thousands of patrons each year.

President Hinckley said of his beloved Dad, “No son ever had a better father”.

John William Hunter, father of the prophet, worked as a motorman for the Boise Valley Traction Company and to help keep the family afloat, Howard’s mother Nellie took odd jobs. Howard himself also learned to work and chip in with a list of jobs that included, “caddying, serving ice cream sodas, writing advertising copy for a newspaper, and working as a bellboy and porter and doing maintenance at a local hotel”.[vi]

What may surprise you the most about Howard W. Hunter’s early family life, however, is that though his mother was actively involved in Church service, his father was not even a member of the LDS Church. Now and then, John would accompany his wife and children to a meeting. In fact, Howard said that one of his favorite childhood memories was returning home from church by streetcar encircled in his father’s arms. But when Howard turned eight and it was time to be baptized, his father wouldn’t allow it.

He insisted that his children be old enough to decide for themselves, but at 12, after seeing his son’s unfailing desire, he allowed Howard to be baptized and soon after given the priesthood.

Although John William Hunter didn’t receive much formal education, he and his wife went out of their way to enrich their children’s minds. Will would take his family on imaginary journeys with the help of the family atlas and an encyclopedia. This instilled Howard with a sense of adventure and a thirst for exploration that never really went away.

It was so strong in fact that, upon graduating high school, Howard’s dance band took an offer from the Admiral Oriental Line to provide music for a two-month cruise to Asia. He visited Tokyo and Shanghai and Hong Kong, even playing tunes on the “Voice of Manila” radio station in the Philippines.

When he returned from the adventures that his father’s influence had taught him to strive for, he learned that his father had finally been baptized into the Church, perhaps partially through the influence of a righteous son.

Among other things, Ezra Taft Benson was known for his championing of missionary work and his great love and reverence for the Book of Mormon. Many will remember his famous admonition to the “flood the earth with the Book of Mormon”[vii] a call to action that was followed by the distribution of a record number of copies of the Book of Mormon through the Church membership to the world. He challenged mission leaders to teach their missionaries to challenge investigators to read the Book of Mormon and pray about it as an essential part of the conversion process; something we take for granted today.

George T. Benson and his seven sons. Ezra is second from the right.

So, where did President Benson get this missionary fire?

Of course, the Lord had something to do with it, but it was also an influence of his earthly father.

Ezra Taft Benson was born in a farmhouse that his father, George Taft Benson, Jr. had built for their family the year before. From his earliest years he learned to work the land and understand the principle of reaping what you sow. They were largely at the mercy of frosts, unseasonable storms and drought and so prayer became an absolute constant in the Benson home. Prayer that included gratitude for life’s challenges and opportunities[viii], but even still there was an approaching challenge that none of them could anticipate.

“As Father drove the horse homeward, Mother opened the mail, and, to their surprise, there was a letter from Box B in Salt Lake City—a call to go on a mission. No one asked if one were ready, willing, or able…As Father and Mother drove into the yard, they were both crying—something we had never seen in our family.”

The emotional parents gathered their seven children around them and told them their father had been called on a mission. They said how blessed they felt to be worthy of such a call even if it meant two years of separation. Prior to this time, the couple had never been separated for more then two nights in their entire marriage and Ezra’s mother was then pregnant with their eighth child.

“I suppose some in the world might say that his acceptance of that call was proof he did not really love his family. To leave seven children and an expectant wife at home alone for two years, how could that be true love?” said President Benson.

“But my father knew a greater vision of love. He knew that ‘all things shall work together for good to them that love God’. He knew that the best thing he could do for his family was to obey God.

“While we missed him greatly during those years, and while his absence brought many challenges to our family, his acceptance proved to be a gift of charity. Father went on his mission, leaving Mother at home with seven children. (The eighth was born four months after he arrived in the field.) But there came into that home a spirit of missionary work that never left it.”

Indeed, even many decades later when he served as the prophet, that spirit of missionary work—inspired by his father’s obedience—still had not left him.

It’s easy to assume that the presidents of the Church are either born already prophets or given miraculous insight and power in a single instant from on high. Certainly, those may both play a role in the development of who they are and what they become, but when the Lord wants to shape one of his children in specific ways, He doesn’t always send a pillar of fire.

Most of the time he sends a father and a mother.

How grateful we should be for the righteous influence of our modern prophets’ fathers. Happy Father’s Day!

Thank you Mariah for a job well done. You captured some powerful and emotional moments for me. Keep up the good work and following in your parents footsteps.