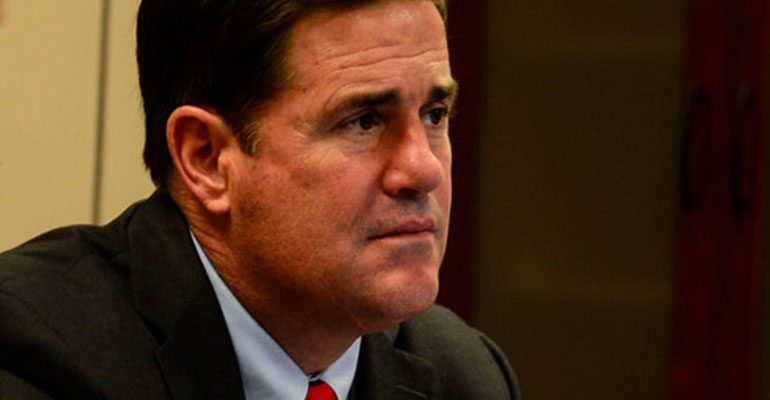 According to Pew Research’s latest poll, there’s a big jump in the number of people who think Christians are a target of discrimination. And the spat over Governor Doug Ducey’s (R-Ariz.) Easter social media post might be the perfect explanation why.

In the three years since the Obergefell ruling, men and women of faith haven’t exactly had an easy time of it in business, education, medicine, the wedding industry, and — as so many of President Trump’s nominees can tell you, politics. Navigating a culture where once-common values are now considered “intolerance” has come as a shock to a lot of Americans. Today, evangelicals are one of the most victimized groups in the country, people say — climbing eight points since 2016.

And it’s not hard to see why. Christians are getting grilled for their faith everywhere from Senate confirmation hearings to human rights commissions. They’ve been fired from jobs, suspended, vandalized, fined, or punishedbecause they want what the Founders came to America to give them: the freedom to live out their faith in everyday life. In a country where three-quarters of the population identifies as “Christian,” that shouldn’t be controversial. But thanks to a powerful minority of secularists, it suddenly is.

Governor Ducey, an outspoken conservative with a great record, has never made a secret of his faith. On Easter, he did what Christians all over the country were doing: celebrating. On Facebook, he posted a picture of the cross and a verse from John 11:25, “Jesus said to her, ‘I am the Resurrection and the Life. He who believes in Me, though he may die, he shall live.'” Underneath the photo was this simple message from the governor: “He is risen! Have a happy and blessed Easter!”

Nothing about the post was offensive or even mildly inappropriate. Until now, when the Arizona Republic insists it’s consulted legal “experts,” who say the governor was in the wrong for using his official account to endorse a religion. Charles Haynes, director of the Religious Freedom Center, insisted that it amounted to a “proclamation of faith” and endorsing a religious like this, in his opinion, “violates the Establishment Clause of the First Amendment.”

Alex Luchenitser, another supposed “expert” from Americans United for Separation of Church and State, argued, “There’s a clear message of favoritism toward Christianity.” Funny, they didn’t seem to mind when Barack Obama wished everyone a Happy Ramadan from his official White House account in 2013 and 2015. This is selective outrage meant to marginalize Christians — and Christians alone.

If the goal was to intimidate Governor Ducey, good luck. He has no intentions of backing down, tweeting to critics, “We won’t be removing this post. Ever. Nor will we be removing our posts for Christmas, Hanukkah, Rosh Hashanah, Palm Sunday, Passover, or any other religious holiday. We support the First Amendment and are happy to provide copies of the Constitution to anyone who hasn’t read it.”

Good for him! That’s exactly the kind of pushback our leaders must put forward against ridiculous attacks like this one. Hats off to Governor Ducey for his boldness. Even as recently as yesterday, he stood up to the Arizona Republic’s @mpolletta and refused to be silenced. “With respect to your “experts,” people don’t lose the right to free speech when they run for office. So, no, we STILL won’t be taking the post down. Not now, not ever.”

Intolerance in the name of Tolerance is wrong. The way to demonstrate tolerance of others whether it is religion, race, ethnicity or political party is to demonstrate respect and allow all people the opportunity to voice their beliefs whether or not we agree. Any American, anywhere is entitled to these rights and should not feel marginalized because they hold a public office. As people we should demonstrate our commitment to this basic value by encouraging all to stand firm for your beliefs. It is when we impose our own definition of Tolerance and Acceptance with very narrow boundaries that we negate the very principle of Tolerance. Those who are critical of the Governors posting as a demonstration of intolerance do not understand the meaning or spirit of the Constitution and should have no credibility with the rest of us.

I'm very proud of you, Governor Ducey. You are helping this generation see the importance of religious freedom. We live in a land that is promised freedom. The Lord set apart this place for the free. I am an Arizonan. I voted for you because of this very reason. Thank you for keeping your promises.