How Much Could Joseph Smith Have Known about Chiasmus in 1829? | Meridian Magazine 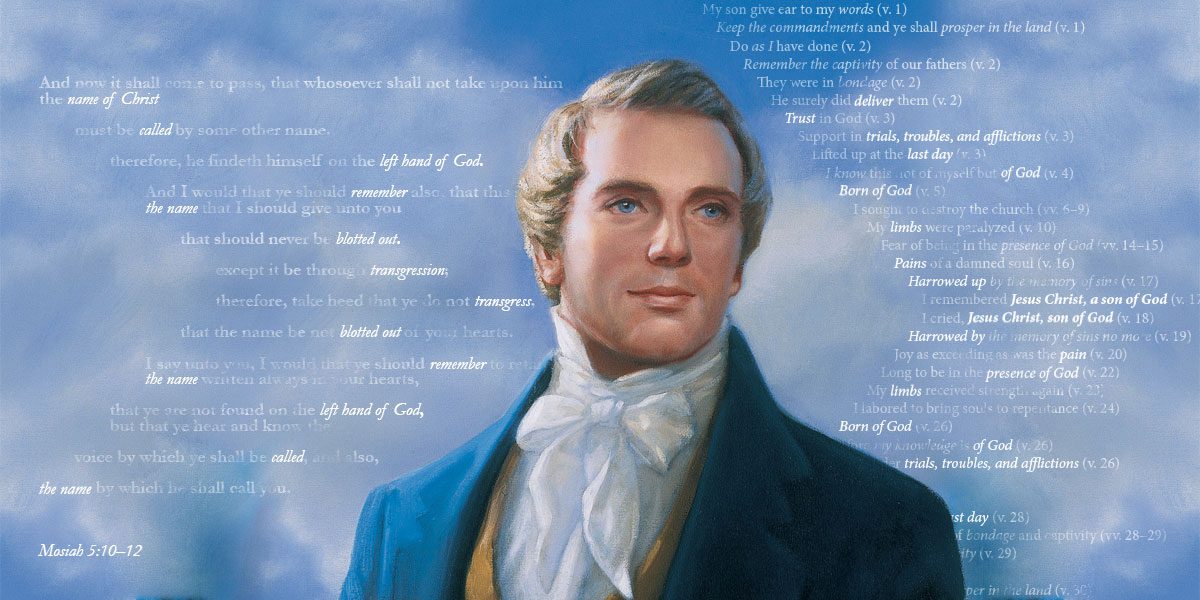 How Much Could Joseph Smith Have Known about Chiasmus in 1829?

“And behold, it is wisdom in God that we should obtain these records, that we may preserve unto our children the language of our fathers.”
1 Nephi 3:19

Editor’s Note: This year marks 50 years since the discovery of chiasmus in the Book of Mormon on August 16, 1967. To celebrate this 50th anniversary, through July and August Book of Mormon Central will publish one KnoWhy each week that discusses chiasmus and its significance and value to understanding the Bible, the Book of Mormon, and other ancient literature. Be sure to check out our other KnoWhys on chiasmus and the Chiasmus Resources website for more information.

Chiasmus is a type of writing style which presents a series of key words or phrases and then repeats them in reverse order. Although this literary form appears in both ancient and modern texts written in “Greek, Latin, English, and other languages, the form was much more highly developed in Hebrew and dates to the oldest sections of the Hebrew Bible and beyond.”[1]

In August 1967, John Welch noticed the presence of chiasmus in the Book of Mormon while serving as a missionary in Germany.[2] Since that time, a flood of research has been devoted to identifying and understanding its usage and importance in the Book of Mormon.[3] There are now hundreds of proposed chiasms in the text,[4] ranging from simple patterns, like A-B-B-A, to much more elaborate usages, such as the famous chapter-length chiasm in Alma 36.[5]

Many people have seen the distinctive and repeated use of chiasmus in the Book of Mormon as evidence that it was written by multiple ancient authors trained in the Hebrew literary tradition.[6] Others, however, have wondered if Joseph Smith might have learned about chiasmus from biblical research available in his day.

It is true that chiasmus was not completely unheard of before 1829 when the Book of Mormon was brought forth by Joseph Smith. In 1742 German scholar D. Johannes Albertus Bengel was probably the first to apply the term chiasmus to a type of literary parallelism, which is where words and phrases on one line of writing correspond to those of another line.[7] However, Bengel’s influence on other writers was minimal.[8] Robert Lowth’s lectures on Hebrew poetry in 1753 at Oxford received much greater attention,[9] but, according to Welch and others, Lowth apparently was “never aware of the phenomenon of chiasmus.”[10]

Building on the work of Lowth, John Jebb in 1820 was the first to identify chiasmus as “a distinct type of parallelism prevalent in the Old and New Testaments,”[11] referring to it as epanodos.[12] Reverend Thomas Boys, who was aware of Jebb’s research, then published two notable works in 1824 and 1825,[13] which discussed and applied the concept of chiasmus much further.[14]

Although these works were potentially available to Joseph Smith, they were published in London, and the likelihood that he came across them before dictating the text of the Book of Mormon, or ever in his lifetime, seems very low. In his research on this subject over the years, Welch has found “no evidence that the 1820, 1824, or 1825 works of Jebb or Boys themselves reached America, let alone Palmyra or Harmony, in the 1820s.”[15]

As close as one finds is a brief summary of Jebb’s 1820 work that was included in the second, 1825 edition of Thomas Hartwell Horne’s massive introduction to the critical study of the Bible, printed both in London and Philadelphia.[16] In its 28-page chapter on Hebrew poetry, there are three short examples of “parallel lines introverted” in the Old Testament and two A-B-B-A examples in the New Testament.[17] As Welch also has observed, “Horne’s work is massively intimidating … [and] mentions virtually everything in the then-known world of biblical scholarship. Merely locating the discussion of chiasmus, epanodos, or introverted parallelism in this vast array is difficult, even when one knows what to look for.”[18]

These sources indicate that there was some knowledge of chiasmus and parallelisms in the Bible prior to the translation of the Book of Mormon in 1829. Despite Joseph Smith’s potential access to these sources, however, there is no direct evidence that he ever heard of chiasmus or came into contact with the works of Jebb or Boys before he translated the Book of Mormon. Nor did Joseph Smith himself ever describe or even mention chiasmus during his lifetime,[19] even though he acquired a copy of Horne’s Introduction to the Critical Studies of the Scriptures in Kirtland, Ohio, in 1835, but by then the Book of Mormon had been in print for five years.[20]

This lack of any hint of awareness on his part poses a problem for the suggestion that Joseph Smith used pre-1829 research on chiasmus to help him concoct the Book of Mormon. Is it really likely that any forger would spend the time to research this complex literary form, perfect his or her mastery of it, use it in dozens of instances in his fabricated scripture, and then never once mention its presence or lead anyone to its discovery? Such a scenario seems highly unlikely.

Furthermore, Welch has argued that “even if Joseph Smith had read Horne or Jebb, he still would have known little about structural chiasmus.”[21] Many of the chiasms in the Book of Mormon are highly sophisticated, and in several ways the Book of Mormon’s use of chiasmus actually varies or strays from what the early pioneers in the field were saying.[22]

The Book of Mormon’s overall use of chiasmus was truly ahead of its time. Or, perhaps better stated, it was behind its time—thousands of years behind. Only recent research has begun to uncover what no one saw in its pages for more than 130 years after its publication—the presence of its chiastic structures and their close match with chiasms from the ancient world.[23]

The overall complexity of the Book of Mormon and the miraculous nature of its translation must also be taken into consideration.[24] Even if Joseph Smith had known of chiasmus, he would still have been “presented with the formidable task of writing—or rather, dictating—extensive texts in this style.”[25] “Imagine the young prophet,” said Welch, speaking in a “style that was unnatural to his world, while at the same time keeping numerous other strands, threads, and concepts flowing without confusion in his dictation.’”[26] Amazingly, he accomplished this without relying on any working notes or reference materials of any kind, according to witnesses who were close to the process.[27]

With these additional factors in mind, it is especially difficult to suppose that the many sophisticated chiasms in the Book of Mormon were simply derived from research available in 1829. On the other hand, their presence is easily accounted for if the Book of Mormon was truly written by ancient prophets who inherited the Hebrew literary tradition from their ancestors and then took great care to “preserve unto [their] children the language of [their] fathers” (1 Nephi 3:19).[28]

[8] Welch, “How Much Was Known about Chiasmus in 1829?” 54. Bengel was a German scholar in Wüttemberg; his main books were written in Latin.

[12] See John Jebb, Sacred Literature (London, UK: Cadell and Davies, 1820), 335–362. Epanodos refers to a form of parallelism very similar to chiasmus and is often used instead of chiasmus in this early literature.

[16] In 1825, Horne published the 4th edition of his three-volume Introduction to the Critical Study and Knowledge of the Holy Scriptures (Philadelphia, PA: Littell, 1825). It seems to have been the first American publication to mention Jebb’s work on chiasmus. A 6th edition of this biblical encyclopedia was published in 1828, with changes mostly to its typesetting. In 1827, Horne published the 2nd edition of a condensed version of his encyclopedia, called Compendious Introduction to the Study of the Bible (New York, NW: Arthur), and in 1829 he published a 3rd edition. These works contained an even briefer mention of Jebb’s chiasmus-related writings (p. 191 in the 1827 edition and p. 144 in the 1829 edition). These encyclopedic volumes never discussed Boys’ research on chiasmus in the Psalms and in the New Testament, and it appears that only Horne’s 1825 edition was published in America. This information corrects and expands what was known in the 1960s and 1970s about these obscure sources. See Welch, “How Much Was Known about Chiasmus in 1829?” 63–68.

[20] Examining this book in the Community of Christ Library in Independence, Missouri, Welch found “no evidence on any page that this copy of this book was ever read by anyone. The book is completely clean: there are no notes, no marginalia, no smudge marks, and no creased pages. It would appear that Joseph did not study this kind of reference material.” Welch, “How Much Was Known about Chiasmus in 1829?” 78.

The question 'How Much Could Joseph Smith Have Known About Chiasmus in 1829?' is surely irrelevant - except for the detractors of the Prophet! First of all, it distracts from his achievements; secondly the Prophet was a translator, and never analyzed the texts; and thirdly, he did it all on just three years of primary school education. There are some highly educated people to day that still do not understand what Chiasmus is. How irksome it must be for some people to be proved so wrong! John