How Does the Book of Mormon Help Date the First Christmas? | Meridian Magazine 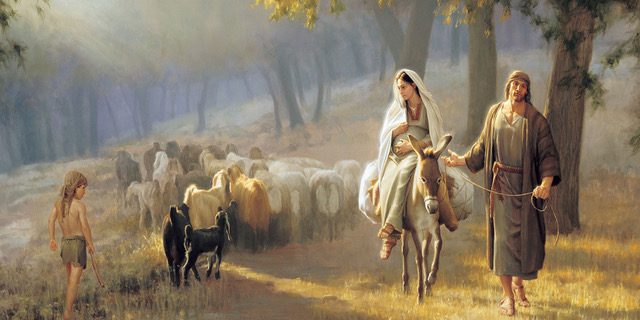 How Does the Book of Mormon Help Date the First Christmas?

“Lift up your head and be of good cheer; for behold, the time is at hand, and on this night shall the sign be given, and on the morrow come I into the world”
3 Nephi 1:13

On December 25, Latter-day Saints join with many other Christians around the world in celebrating the birth of Jesus Christ, the Savior and Redeemer of all mankind. Yet most scholars agree that the exact date of Christ’s birth is uncertain. Even Latter-day Saints and their General Authorities have expressed different views on the matter.[1]

Birthdates were not as important in the ancient world as they are today, and consequently the birthdays of most major figures in ancient history are unknown. It was not until the 2nd century that early Christians began to discuss the timing of Christ’s birth, and already by then there was disagreement.[2] Such disagreement continued even as the celebration of Christmas on December 25 began to be fixed in the late 3rd century AD,[3] and it wasn’t until the 6th century that a calendar was made attempting to calculate time based on the date of Christ’s birth.[4]

Given the lack of interest in Christ’s birth early on, and the uncertainty in later centuries, it is no wonder the question remains unsettled today. Scholars employ a wide range of sources, including the Gospel accounts, ancient historical works, astronomy, and archaeology, when trying to address this question. The year 4 BC is considered the latest possible date because Herod the Great died in the spring of that year, meaning the Savior must have been born sometime before then (Matthew 2; Luke 1:5).[5]

An important factor to settling the timing of Christ’s birth is determining the timing of His death in combination with the duration of his life.[6] While there remains some uncertainty, many scholars have concluded “that the first weekend of April AD 30 is the most likely time of the death of Jesus.”[7]

Though scholars have scoured the gospel accounts for clues, nothing in the New Testament provides definitive answers as to the length of the Savior’s life.[8] Latter-day Saints benefit from having another source on the duration of the Savior’s life: the Book of Mormon.

Since the Nephites began counting their years from the time the sign of Christ’s birth was given (3 Nephi 2:8), and since they recorded the exact day they received the sign of His death in their calendar (3 Nephi 8:5), the Book of Mormon provides a fairly precise duration of the Savior’s life.[9] The sign of Christ’s death came “in the thirty and fourth year, in the first month, on the fourth day” (3 Nephi 8:5), so the Savior lived at least 33 years and 4 days by the Nephites count.

Yet there remains some ambiguity. First, it is not certain how the Nephites counted those 33 years. Did they start counting from the very day the sign was given or did they wait for the next new year’s day? Did they count the year in which the sign was given as year one, or begin the year after? There also remain questions about the length of a Nephite “year” at that time, and whether they were solar years (~365 days), lunar years (~354 days), or the tun years (360 days) used in Mesoamerica.[10]

With these considerations in mind, LDS scholars Lincoln H. Blumell and Thomas A. Wayment have reasoned that the Book of Mormon “indicates Jesus lived between thirty-two and nearly thirty-four years.”[11] Combining the Book of Mormon with additional evidence from archaeology, astronomy, history, and ancient Jewish and Mesoamerican calendars, various Latter-day Saint researchers—such as apostle Orson Pratt, researcher Randall Spackman, New Testament scholar Thomas Wayment, and archaeologist Jeffrey Chadwick—have reached different conclusions, ranging between spring in 5 BC to spring in 4 BC.[12]

While the Book of Mormon does not provide definitive evidence on the dating Jesus Christ’s birth, it does offer important additional information, especially to scholars within the Latter-day Saint tradition. Specifically, it provides a limited range for the lifespan of Jesus which, once anchored to a solid death date, limits the possible time span within which the birth of Christ must have occurred. If the proposed date of April AD 30 for the death of Jesus is correct, then possible birthdates for Christ are limited to sometime in 5 BC or in the early months of 4 BC.

As a Latter-day Saint, I am not only duty-bound but personally grateful to accept and present data from the Book of Mormon, the genuine historical reliability of which I am both spiritually and materially convinced, to corroborate the evidence of the New Testament and the other avenues explored.[13]

In the end, knowing exactly when Jesus Christ was born is not as important as knowing that He lived and that He is the Savior of the world, that he was born as “the light and the life of the world” (3 Nephi 11:11).

The Book of Mormon is absolutely clear on the overriding reality that the Lord Jesus did in fact condescend to come and dwell as a mortal among mankind, and to suffer and die, bringing to pass the resurrection and immortality of all the sons and daughters of God. Just as the sign announcing his birth brought light and deliverance to the Nephites,[14] He will bring light and deliverance to all who come unto Him.

[1] See Jeffrey R. Chadwick, “Dating the Birth of Jesus Christ,” BYU Studies 49, no. 4 (2010): 6–9. Some Latter-day Saints might be surprised to learn that not everyone, including respected authorities and apostles like Orson Pratt, Hyrum M. Smith, J. Reuben Clark, and Bruce R. McConkie, agrees with the tradition, started 100 years ago by James E. Talmage, that Christ was born on April 6, 1 BC, based on Doctrine and Covenants 20:1. The best evidence indicates that the Doctrine and Covenants 20:1 was written by John Whitmer as an introduction to the revelation (4 days after the fact), and “X years since the coming of our Lord and Savior Jesus Christ in the flesh” appears to be Whitmer’s fancy way of expressing the date. It is used in the Church Historical record by Whitmer in reference to June 12, 1831, for instance. See Chadwick, “Dating the Birth of Jesus Christ,” 6–9, 28–29 n.12; Lincoln H. Blumell and Thomas A. Wayment, “When Was Jesus Born? A Response to a Recent Proposal,” BYU Studies 51, no. 3 (2012): 71–72; Steven C. Harper, “Historical Headnotes and the Index of Contents in the Book of Commandments and Revelations,” BYU Studies 48, no. 3 (2009): 57. Also see Randall P. Spackman, “Introduction to Book of Mormon Chronology: The Principal Prophecies, Calendars, and Dates,” (FARMS Preliminary Reports, 1993), 70–74; Tvedtnes, “When Was Christ Born?” 13–14; Thomas A. Wayment, “The Birth and Death Dates of Jesus Christ,” in The Life and Teachings of Jesus Christ, 3 vols., ed. Richard Neitzel Holzapfel and Thomas A. Wayment (Salt Lake City, UT: Deseret Book, 2005), 1:83–85.

[3] See John A. Tvedtnes, “When Was Christ Born?” Interpreter: A Journal of Mormon Scripture 10 (2014): 17–24. Some Christians (mainly Eastern Orthodox) celebrate Christmas on January 6. See Taylor Halverson, “The Real 12 Days of Christmas and Why April 6 is a Religiously Significant Date,” Deseret News, December 13, 2014.

[5] See Chadwick, “Dating the Birth of Jesus Christ,” 11–14; Wayment, “The Birth and Death Dates of Jesus Christ,” 385–387; Blumell and Wayment, “When Was Jesus Born?” 59–62; Tvedtnes, “When Was Christ Born?” 4; Spackman, “Introduction to Book of Mormon Chronology,” 48–51. On the other hand, the account in Luke 2 mentioning Cyrenius (Luke 2:2) would require the story to take place sometime around AD 6–7. This is clearly at odds with the death of Herod, and as such most scholars regard this detail as erroneous. See Blumell and Wayment, “When Was Jesus Born?” 61.

[7] Wayment, “The Birth and Death Dates of Jesus Christ,” 394. See also Chadwick, “Dating the Death of Jesus Christ,” 139–142 for a review of scholars who agree with this timing. However, Blumell and Wayment, “When Was Jesus Born?” 64–70 urge caution against being too dogmatic about this date.

Don't forget this excellent article about the dating of Christ's birth. https://www.lds.org/ensign/1985/06/the-restoration-of-priesthood-keys-on-easter-1836-part-1-dating-the-first-easter?lang=eng https://www.johnpratt.com/items/docs/lds/easter/dating.html

Good article but you might investigate the area Christ said He was at...New Jerusalem in 3 Nephi 20 and 21. Even the Jaradites said they were in New Jerusalem in Ether 13. Look between the Great Lakes and you will see a narrow neck of land or narrow passage. That might lead you to the land of Cumorah, by the hill Cumorah in Mormon 6. Spend at least half your time looking for evidence here rather than Mesoamerica.