How Did President Gordon B. Hinckley Emphasize the Importance of the Book of Mormon? | Meridian Magazine 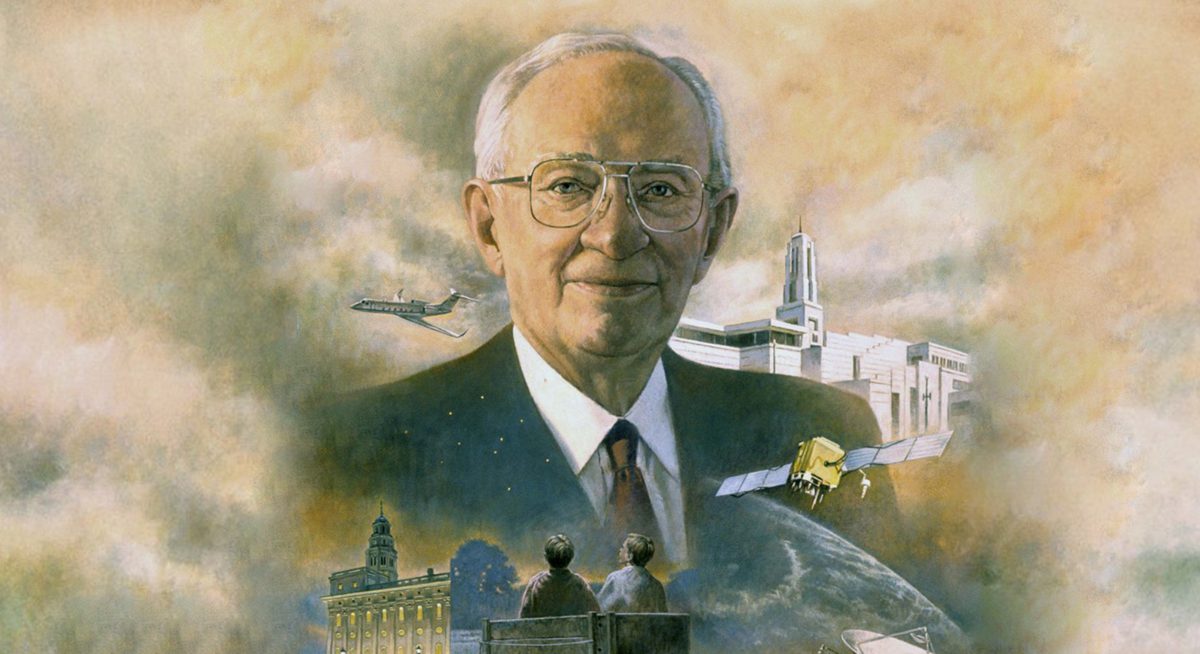 How Did President Gordon B. Hinckley Emphasize the Importance of the Book of Mormon?

“Wherefore, how great the importance to make these things known unto the inhabitants of the earth, that they may know that there is no flesh that can dwell in the presence of God, save it be through the merits, and mercy, and grace of the Holy Messiah”
2 Nephi 2:8

Throughout his ministry, President Gordon B. Hinckley, fifteenth president of the LDS Church, repeatedly emphasized the importance of the Book of Mormon. In August 2005, President Hinckley challenged Latter-day Saints to read the entire book before the end of the year. He later reported: “It is amazing how many met that challenge. Everyone who did so was blessed for his or her effort. As they became immersed in this added witness of our Redeemer, their hearts were quickened and their spirits touched.”[1]

President Hinckley had long believed in the power of the Book of Mormon to change people’s lives and bring them to Christ. As a young man, soon after returning from his mission, he worked with the Church’s Radio, Publicity, and Mission Literature Committee. He later recalled having told a coworker: “I have always thought that we will do our best work when we get people interested in the Book of Mormon to the point where they will read it. It is then that the Spirit can bear witness of its divinity.”[2]

President Hinckley made a point of teaching from the Book of Mormon in many of his addresses to the saints. Although during his long ministry he found occasion to quote from almost every book within the Book of Mormon, there were several passages that he seemed to be particularly fond of using. One of these was Nephi’s righteous commitment to keep the Lord’s commands in 1 Nephi 3:7. He recounted hearing Nephi’s words when he was a teenager and how much of an impact they had on him:

I recall sitting in this Tabernacle when I was fourteen or fifteen … and hearing President Heber J. Grant tell of his experience in reading the Book of Mormon when he was a boy. He spoke of Nephi and of the great influence he had upon his life. And then, with a voice ringing with a conviction that I shall never forget, he quoted those great words of Nephi: “I will go and do the things which the Lord hath commanded, for I know that the Lord giveth no commandments unto the children of men, save he shall prepare a way for them that they may accomplish the thing which he commandeth them.”[3]

He went on to share that inspiring passage with thousands of people, asking them to adopt Nephi’s words as their own motto.[4]

President Hinckley often used Nephi’s prophetic warnings in 2 Nephi 28, regarding the wicked trends of the last days, to counsel members of the Church to avoid temptation and sin. He found Nephi’s words especially applicable to what he termed “the plague of pornography” in our time. He explained:

Centuries ago Nephi foresaw our day and said concerning it:

“And behold, others he flattereth away, and telleth them there is no hell; and he saith unto them: I am no devil, for there is none—and thus he whispereth in their ears, until he grasps them with his awful chains, from whence there is no deliverance” (2 Nephi 28:19–22). Those are interesting and descriptive words—“leadeth them away carefully down to hell,” and “he whispereth in their ears.” How descriptive of the seductive and beguiling ways of the purveyors of filth and violence and evil.[5]

To help families avoid such evils, he admonished parents to bring up their children “in the nurture and admonition of the Lord,” using the example of Enos’ father, Jacob, in Enos 1:1.[6]

Like Alma, President Hinckley longed for a time when the collective voice of the Church could, as with the voice of an angel, “cry repentance unto every people” (Alma 29:1). He declared: “We have not reached that state, but we have taken a giant step forward in that direction,” referring to the technologies that were beginning to allow the Church to more easily communicate with people throughout the world.[7]

President Hinckley loved to recount the story of the Savior’s visit to the Americas (3 Nephi 11) and used it many times as another witness to the life and character of Jesus Christ. Regarding the miracle of Christ’s Resurrection, he testified:

All of this is set forth as the testimony of many witnesses in the four gospels of the New Testament. And there is a fifth which speaks with equal power as an added witness of His divinity and of the reality of His resurrection. It is found in this other testament which we call the Book of Mormon.[8]

The Book of Mormon … testifies of Him who was born in Bethlehem of Judea and who died on the hill of Calvary. To a world wavering in its faith, the Book of Mormon is another and powerful witness of the divinity of the Lord.[9]

President Hinckley admonished faithful members of the Church to do more to follow Christ’s example, as found in that Book of Mormon. For example, he reminded young men who bear the Aaronic Priesthood that it was Jesus Christ who first set the example of how the sacrament should be administered.

It was [Christ] who first gave to those He loved the emblems of His flesh and blood and commanded that all should partake of them in remembrance of Him and as a token of a covenant between God and man (see 3 Ne. 18:1–11; 20:3–9). When you priests of the Aaronic Priesthood administer the sacrament, you are doing what Jesus did while He was yet in the flesh, and which He also did when He ministered among the Nephites following His resurrection.[10]

One of President Hinckley’s most frequent and impassioned calls to action regarding the Book of Mormon was his challenge for all to diligently and sincerely pray about it to know of its truthfulness, based on the promise Moroni issued in Moroni 10:3–5. He noted, “The Book of Mormon is the only book ever published, of which I know, that carries in it a promise that one who reads it prayerfully and asks concerning it in prayer will have revealed to him by the power of the Holy Ghost a knowledge that it is true.”[11] When he called on all to read and pray about the book, his invitation was compelling.

Brothers and sisters, without reservation I promise you that if you will prayerfully read the Book of Mormon, regardless of how many times you previously have read it, there will come into your hearts an added measure of the Spirit of the Lord. There will come a strengthened resolution to walk in obedience to his commandments, and there will come a stronger testimony of the living reality of the Son of God.[12]

President Gordon B. Hinckley was an exemplary defender and testifier of the Book of Mormon. He developed a strong testimony of the book from a young age, and his great witness of its truth was nurtured by diligent study. As a young man, Gordon made a habit of consistent scripture study, a pattern which continued when he left to serve a mission in England.

“As a missionary, I read each evening before going to bed a few chapters of the Book of Mormon,” he said, “and there came into my heart a conviction which has never left: that this is the word of God, restored to the earth by the power of the Almighty, translated by the gift and power of God to the convincing of the Jew and the Gentile that Jesus is the Christ.”[13]

His testimony of the book was unfalteringly firm and powerful. Characteristic of his witness was this declaration, given at the Sunday morning session of the 176th General Conference: “The Book of Mormon is all that it purports to be—a work recorded by prophets who lived anciently and whose words have come forth ‘to the convincing of the Jew and Gentile that Jesus is the Christ, the Eternal God, manifesting himself unto all nations’ (Book of Mormon title page).”[14]

President Hinckley was a strong advocate for the importance of the Book of Mormon throughout his long ministry. His testimony was this: “There is nothing we could do of greater importance than to have fortified in our individual lives an unshakable conviction that Jesus is the Christ. … And, my brothers and sisters, that is the purpose of the coming forth of this remarkable and wonderful book.”[15]

“The Power of the Book of Mormon,” Teachings of Presidents of the Church: Gordon B. Hinckley (Salt Lake City, UT: The Church of Jesus Christ of Latter-day Saints, 2016).