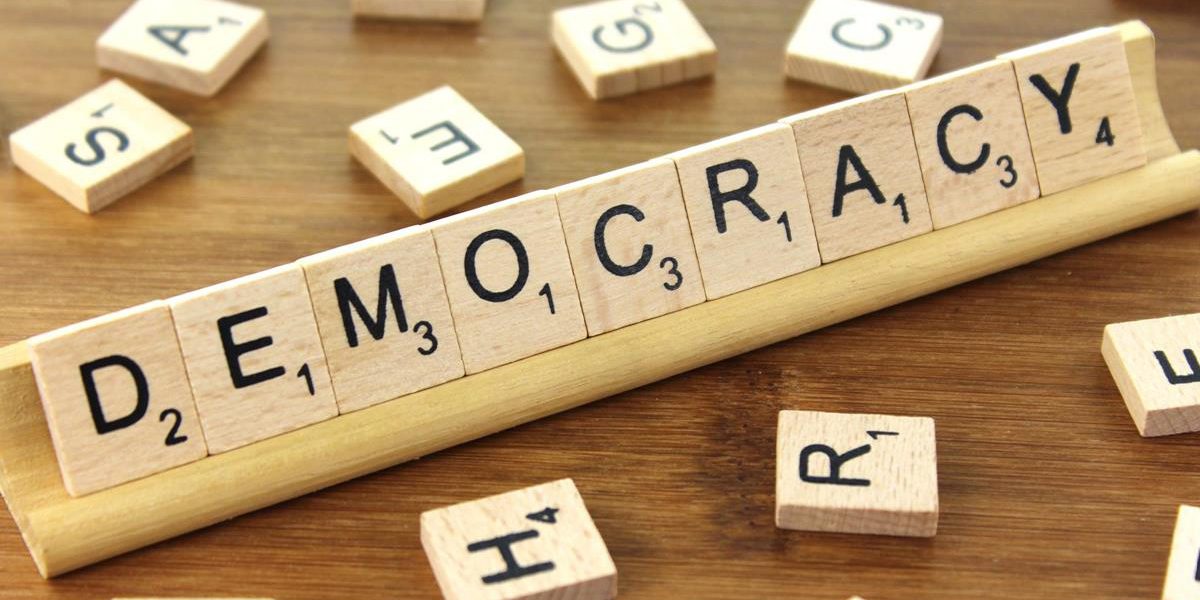 How Did King Benjamin’s Speech Lead to Nephite Democracy?

The end of the book of Mosiah introduces a new age in Nephite society in which their traditional political system is changed from a monarchy to a system of judges that gave the “voice of the people” greater influence in the political process (see Mosiah 29). The roots of this political transformation can be seen in the words and actions of Mosiah’s father, King Benjamin.

Benjamin’s famous speech at the coronation of his son, some thirty years earlier, was full of political innovations that served to “democratize” Nephite society. These new developments made rituals, covenants, and privileges that were traditionally reserved for kings available to the people in general. The following are several of the elements that Benjamin introduced that moved the Nephites towards a more democratic system.[1]

Direct Participation in the Covenant

Traditionally, only the king entered into the covenant that declared him to be God’s son (Psalm 2:6–7). This covenant guaranteed that, on condition of faithfulness, the king’s “seed [royal line] will endure forever, and his throne as the sun before me” (Psalm 89:36). The blessings and responsibilities of the covenant would traditionally be passed from the king to his heir, but Benjamin, at the coronation of his son, extended participation in this covenantal status to all of his people.

Part of the coronation ritual of the king, in the royal traditions of Israel, involved falling to the earth or lowering oneself to the dust (Mosiah 4:1–3)[3] in subservience to God.[4] The language of being raised “from the dust” was a metaphor for enthronement, exaltation and resurrection. Kings were thus raised up by infusion of the Spirit, as was Adam (see Genesis 2:7),[5] and were declared to be God’s sons (Psalm 2:7).[6] This elevated status was tied to the covenant made between God and the king (Psalm 89:19–39). King Benjamin’s people “viewed themselves as … less than the dust,” but when the “Spirit of the Lord came upon them, … they were filled with joy” (Mosiah 4:2–3, 20). Benjamin announced that “because of the covenant which ye have made ye shall be called the children of Christ, his sons, and his daughters; for behold, this day he hath spiritually begotten you” (Mosiah 5:7).

Standing on the Right Hand

Because of the covenant, Israel’s king stood in a special position with respect to God: at God’s right hand; Psalm 110:1 says to the king, “Sit thou at my right hand, until I make thine enemies thy footstool.” By including all the people in the covenant, King Benjamin opened the way for each one to “be found at the right hand of God” (Mosiah 5:9), to occupy the position of kings and queens in God’s kingdom.

Great blessings were promised to the king for his faithfulness to the covenant, including the notion that God would help him defeat his enemies (Psalm 72:9). Similarly, Benjamin emphasized to the people that they all, through their obedience, would be blessed so that “your enemies shall have no power over you” (Mosiah 2:31).

Hearing the Voice of the People

During the process of covenant-making, the people answered King Benjamin’s words as they “cried aloud with one voice” (Mosiah 4:2). By allowing the people of his kingdom to participate in the covenant, he was allowing the voice of the people to be heard. There is no record in the Book of Mormon prior to this that indicates that “the voice of the people” had ever been consulted. However, after Benjamin set this precedent, it became an important aspect of Nephite political life throughout the reign of the judges (see Mosiah 29:25–26; Alma 2:7).

This move towards greater inclusiveness in covenant blessings has parallels in Israelite/Jewish history. To cite one example, biblical scholars have postulated that many of the Psalms, in their present form, were likely modified by later editors so that they could apply to a greater audience than originally intended.

Scott Starbuck has argued that psalms, such as Psalms 2, 20, 21, 45, 110, and others that make clear reference to the Israelite king, likely originally contained the name of the monarch who ruled at the time of their composition—but that the names were subsequently removed in the Exilic or early Postexilic periods, in an effort to democratize the texts after the fall of the Davidic monarchy.[7]

These psalms began to be interpreted as referring not to a single royal protagonist, but to the community as a whole. A concrete example of this is an interpretation of Psalm 2 found among the Dead Sea Scrolls. On a scroll labeled 4QFlorilegium (4Q174), the author cited part of Psalm 2 and explained that the “anointed” of Psalm 2:2 should be understood as the plural “elect ones of Israel in the Last Days.”[8]

Although this text was written around 150 to 200 years after the time of King Benjamin, it appears that a similar sentiment existed in both contexts regarding the difficulties of traditional monarchy and a desire to include a larger section of the population in direct participation in the Lord’s covenant.

Benjamin took the roles, responsibilities, and privileges that had anciently been reserved for the monarch, who was understood to represent the people, and democratized them so that they applied and were available to each individual who entered into the covenant with God. For this, King Benjamin was remembered by the Nephite record keepers as one of the best kings that they ever had (Words of Mormon 1:13–18).

Benjamin’s example and efforts paved the way for the democratic political developments that would soon occur, towards the end of the reign of his son, Mosiah. The motivation behind these changes, according to Mosiah, was a desire to eradicate “inequality” from the land and to extend “liberty,” so that “every man may enjoy his rights and privileges alike” (Mosiah 29:32). It was King Benjamin’s previous efforts that inspired Mosiah to make these changes.

BYU Professor of Law John W. Welch argued that King Benjamin’s speech “may be the best royal and religious text to be found anywhere in world literature” that demonstrates this democratizing disbursement of royal duties and privileges to the people. Recognizing this effort by Benjamin helps us to understand why Mosiah made the political reforms that he did and why the people reacted so positively to Benjamin’s speech and to his reign.

Even more than what can be seen in the writings of the Dead Sea sect, there exists in the record of Kings Benjamin and Mosiah a movement towards political democracy and equality for all members of society. Through Benjamin’s efforts, the covenant truly was democratized, so that “there was not one soul, except it were little children, but who had entered into the covenant and had taken upon them the name of Christ” (Mosiah 6:2).

All this leads to the conclusion that the ultimate elimination of kingship and the subsequent inauguration of the reign of judges by King Mosiah was already a political inevitability embedded in the spirit of this age, propelled forward decisively by the expansive steps taken by King Benjamin in his powerful and masterful oration.[9]

[1] A more comprehensive list that includes these points and others can be found in John W. Welch, “Democratizing Forces in King Benjamin’s Speech,” in Pressing Forward with the Book of Mormon, ed. John W. Welch and Melvin J. Thorne (Provo, UT: FARMS, 1999), 110–126.

[2] This was something of an innovation on King Benjamin’s part, as the law of Moses permitted some forms of servitude/slavery (see Exodus 21:20; Leviticus 25:6; Isaiah 24:2).

[7] See Scott R. A. Starbuck, Court Oracles in the Psalms: The So-Called Royal Psalms in their Ancient Near Eastern Context (Atlanta, GA: Society of Biblical Literature, 1999), 211–212. See also Jamie A. Grant, The King as Exemplar: The Function of Deuteronomy’s Kingship Law in the Shaping of the Book of Psalms (Atlanta, GA: Society of Biblical Literature, 2004), 281; Howard N. Wallace, “King and Community: Joining with David in Prayer,” in Psalms and Prayers, ed. Bob Becking and Eric Peels (Leiden: Brill, 2007), 269. Wallace commented: “There is within the Psalter a shift in emphasis from a focus on the individual to communal concerns … Some Psalms have been reworked to include collective features.”

We are taught that “democratic” government began with the Greeks. It did not, it goes back, in various forms to the beginning of history. Israelite society always had a “democratic” streak, because the covenant with God was always conditioned on the peoples’ willingness to accept it voluntarily. The covenant was never imposed by force. The will of the people was expressed through a “council of elders,” an assembly of tribal leaders with precedents going back at least to the days of Abraham. In Lehi’s day, it was known as the Am ha-Aretz, the “people of the land.” Meyer Sulzberger lists about a dozen other interchangeable names for this Israelite parliament, including “the voice of the people.” Mosiah 29 states that “You shall do all your business by the voice of the people.” V of the P was a term of art, meaning Parliament. Mosiah 29 has astonishing parallels to the writings of Aristotle and Thucydides on the basics of popular government. These concepts did not originate with the Greeks, they just codified them. The Nephite “Reign of the Judges” was not a democracy, but rather a republic, just not the sort we are familiar with today. The Israelite parliament had an upper and lower house, which suggests the “higher” and “lower” judges of Mosiah 29. Captain Moroni was appointed Chief Captain by “the chief judges” and “the voice of the people,” i.e. the upper and lower houses of the Nephite parliament. There are even a couple of references to voting by ballot, e.g. “they cast in their voices…and they were laid before the judges.” Early critics of the Book of Mormon, e.g. Alexander Campbell, saw 19th Cen. “Jacksonian democracy” all over the B of M. And he was right, for the wrong reasons, because it was indeed a popular government. Professor Bushman, looking at our text with an American eye, didn’t see anything that suggested the rhetoric of the American Revolution. And he was right, indicating the Book of Mormon did not issue from a 19th Cen. setting. However, look at it from the perspective of Lehi, and things begin to come off the page. The text is loaded with political terms of art and actions.

I think it would be a bit of a stretch to call the reign of the judges a democracy. The franchise, if we can call it that, would have been severely limited to men with a great deal of wealth. Mormon is vague about how judges were selected. He says the voice of people but doesn't go into any great detail. We see sons taking over from their fathers, inheriting their fathers position. Most likely the abolition of the Nephite monarchy(which was never universally popular, there were always "king men") led to oligarchy. Not democracy.