How Could Shiz Move and Breathe After Being Beheaded? | Meridian Magazine 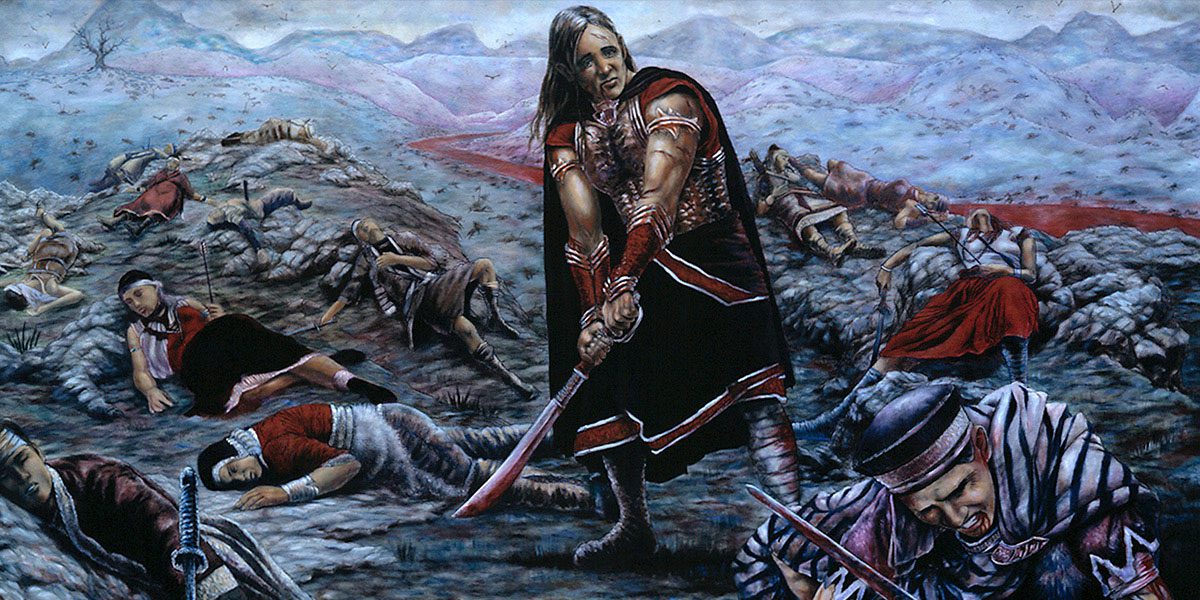 How Could Shiz Move and Breathe After Being Beheaded?

“And it came to pass that after he had smitten off the head of Shiz, that Shiz raised up on his hands and fell; and after that he had struggled for breath, he died.”
Ether 15:31

During the final Jaredite battle, the great king Coriantumr cut off the head of his opponent, Shiz.[1] But “after he had smitten off the head of Shiz … Shiz raised up on his hands and fell; and after that he had struggled for breath, he died” (Ether 15:31). A man struggling for breath without a head is hard to imagine (and most people would not want to). However, this strange event is supported by medical research.

Dr. M. Gary Hadfeld, a professor of neuropathology, discovered a possible medical explanation for Shiz’s actions. He stated that “Coriantumr was obviously too exhausted to do a clean job. His stroke evidently strayed a little too high. He must have cut off Shiz’s head through the base of the skull, at the level of the midbrain.”[2] If this was the case, then Shiz’s strange death scene makes sense.

Hadfield explained, “Shiz’s death struggle illustrates the classic reflex … when the upper brain stem … is disconnected from the brain.”[3] Certain muscles in the arms and legs contract, and this could have caused Shiz to raise up on his hands. This also explains why Shiz would, “struggle for breath.” Hadfield stated that this botched decapitation “would also cause his rib cage to expand and contract automatically, as it does in all of us when we are sleeping.”[4] This would have made it sound like Shiz was “struggling for breath.” This type of neural phenomenon was first reported in 1898, many years after the publication of the Book of Mormon.[5]

Hadfield noted that “the event obviously astonished both Ether and Moroni, who chronicled it.” This is likely why they both would have felt compelled to include it. Even though Moroni would have been familiar with war and the head-injuries that go with it, he still “singled out this extraordinary occurrence to include in his abridgment. Perhaps Ether and Moroni had concluded that Shiz’s last-minute ‘pushup,’ … was due to an unconquerable spirit, an unwillingness to die.”[6] Even in death, Shiz’s bloodlust knew no bounds.

In the past, some have considered this story to be utterly unbelievable. Yet the details turn out to be scientifically sound. This grisly event is uncomfortably true to life, showing yet another example of the benefits of patient investigation over shallow reading.

In addition, this uncomfortably gruesome detail, described as the “most graphic passage in scripture” reminds the reader of the brutality of war.[7] Moroni chose a brutal decapitation as one of the major events to end the book of Ether with. He could have left out such an uncomfortable detail, but both Ether and Moroni chose to include it. Moroni may have wanted to emphasize the brutality and hopelessness of this war.

In reflection of the utter … perishability of their lives and works, [Coriantumr and Shiz] held onto nothing but their swords; no security offered itself. The relentless law of the harvest rolled upon them, and they lived out their remaining days like specters in a terrifying nightmare of anger – sickness, howling, stench, and blood. The lives they had chosen had filled them, not with desire for peace and abundant, thriving life, but with hatred and self-destruction. The ultimate end of evil is death.[8]

Most readers of the Book of Mormon only like to remember the glorious aspects of war in the Book of Mormon. Moroni does not allow this luxury. Ether 15 portrays an exhausted Coriantumr, covered with blood and mud, so tired that he cannot quite execute a proper decapitation. The brutality of this scene offers a stark reminder that war is always horrific, and that people should not forget the ultimate ending to such senseless conflict. This lesson was not lost on Moroni, who had seen his entire civilization destroyed through war. In the modern world, which is still steeped in warfare, it should also not be lost on readers today.

[1] Decapitating a captive like this would have been common in both the Ancient Near East and pre-Columbian America. See Morgan W. Tanner, “Jaredites,” Encyclopedia of Mormonism, 4 vols., ed. Daniel H. Ludlow (New York, NY: Macmillian, 1992), 2:719.

[2] M. Gary Hadfield, “Neuropathology and the Scriptures” BYU Studies 33, no. 2 (1993): 325. This understanding assumes that part of the bottom of the head survived, so that Coriantumr did not “smite off” all of the head of Shiz, which some people have taken objection to. However, such a literal reading of the text is unnecessary. See Brant A. Gardner, Second Witness: Analytical and Contextual Commentary on the Book of Mormon, 6 vols. (Salt Lake City, UT: Greg Kofford Books, 2007), 6:326, including footnotes.

[4] M. Gary Hadfield, “My Testimony, as an Academician, of God and of the Church of Jesus Christ of Latter-day Saints,” at Mormon Scholars Testify, April, 2010, online at mormonscholarstestify.org.

[6]  Hadfield, “My Testimony,” online at mormonscholarstestify.org.

Shiz' beheading always reminds me of the famous "Michael" the chicken from the early 1900's whose owners decapitated him one day, with several other chickens on their farm. However Michael lived. Here's a great link to his story. https://www.bbc.com/news/magazine-34198390 Shiz was lucky...he only had to suffer headless for a few minutes at most, michael lived 18 months with out a head.

As a licensed Paramedic (now retired), I once transported a man to the hospital after attempting suicids by a high powered rifle. Trying to be tactful with the description, nothing remained from the jaw up, meaning the front half of his head, everything forward of his ears, was gone. We found him lying on his stomach & up on his forearms, trying to breath. All we could do is transport him in this position as he couldn't hear, see, or speak to us, & could not comprehend anything we tried to do, just struggling in his misery. He died about an hour after. As the brain is very different between chickens & humans, being of a low order with a very different physiology, that analogy does not equate